Roz and her husband Jeremy talk about the impact of Roz's diagnosis on their lives. 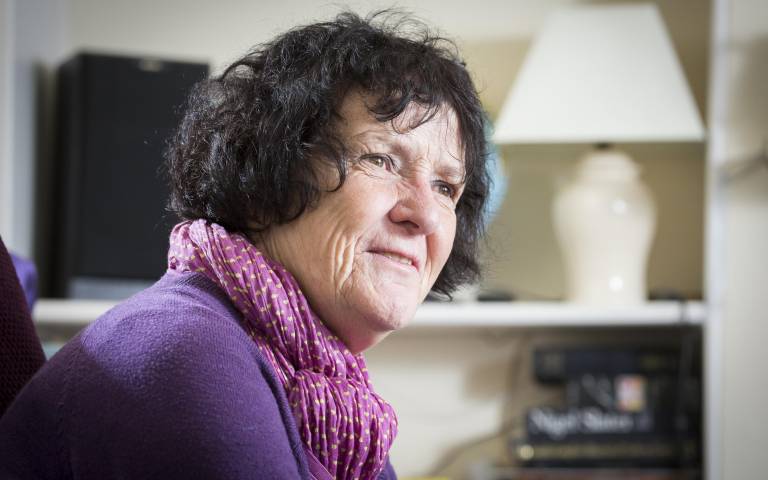 Roz Underwood first realised that something wasn’t quite right when she was talking on the phone to her brother, three years ago. Her words felt, as her husband Jeremy Cox describes, ‘jumbled.’

“So went to see our GP, who did a memory test,” says Jeremy. “Then we were referred to a psychiatrist at our local hospital, who also did a memory test. Roz was diagnosed with dementia, and given an MRI, and we were told she had Alzheimer’s.”

Then the couple met Dr Andrew Sommerlad, clinical training fellow at UCL’s Faculty of Brain Sciences, who was recruiting for a study on how people with dementia cope with social situations. He interviewed Roz and suspected that she might not have the most common form of Alzheimer’s.

Dr Sommerlad referred Roz to Professor Jason Warren at UCL’s Dementia Research Centre (DRC), based at the National Hospital for Neurology and NeuRozurgery. He diagnosed her with primary progressive aphasia (PPA), a rare form of dementia which affects the language centre in the left side of the brain.

The condition means that Roz, 69, knows what she wants to say, but is unable to get the words out. She is still able to speak, however, and has carried on doing many of the things she loves, such as reading, watching TV, going for walks and travelling – the couple recently returned from a holiday in India.

Together, she and Jeremy have found ways to cope. Jeremy, who speaks on Roz’s behalf, says: “Finding the right word might be a guessing game. Sometimes she can say what she wants. She can write things down with no problem, or sometimes we mime – for example, she’ll put her fingers in a circle and hold them up to her eyes for ‘glasses.’”

Roz is currently taking Rivastigmine, a brain stimulant, which helps improve her brain’s function. There is no cure, and nobody knows how quickly the disease is likely to progress.

Dementia of any type is hard to live with, for both the person with the disease and the carer. Roz, a former student counsellor, finds it very frustrating to not be able to communicate.

“It’s a distressing thing,” says Jeremy. “It can get Roz down, and she can get into a state where she thinks there’s nothing to do, she’s not good for anything, and all she can do is watch television. That does happen, although we do go out and have lunch and see friends, which always cheers Roz up.”

Roz and Jeremy feel strongly that dementia research needs more resources, and more research. “Cancer has a huge amount of funding compared to dementia, and there are effective treatments already in place for some cancers, while there is no effective treatment for dementia,” says Jeremy. “I’m aiming to email every MP in the country and ask them when they are going to start giving dementia the attention it deserves.”

Nobody knows what Roz’s future holds. She has been offered a lumbar puncture to investigate the possibility of her having frontotemporal dementia, another rare form of the disease. “What we can do with that knowledge, we don’t know,” says Jeremy. “We didn’t want to do it at first, but Dr Sommerlad said perhaps it’s better to know.

The couple are pleased to hear that money raised from the carrier bag charge will be going towards UCL’s new Dementia Research Institute, the UK’s first dedicated institute for studying and treating the condition.

“We are so grateful to Dr Sommerlad for spotting that Roz didn’t have ordinary Alzheimer’s,” says Jeremy. “And we are lucky that we have access to the top experts in the country. But let’s get this research going faster. We might not crack it in Roz’s lifetime, but given enough time and money, we’ll solve this problem.”