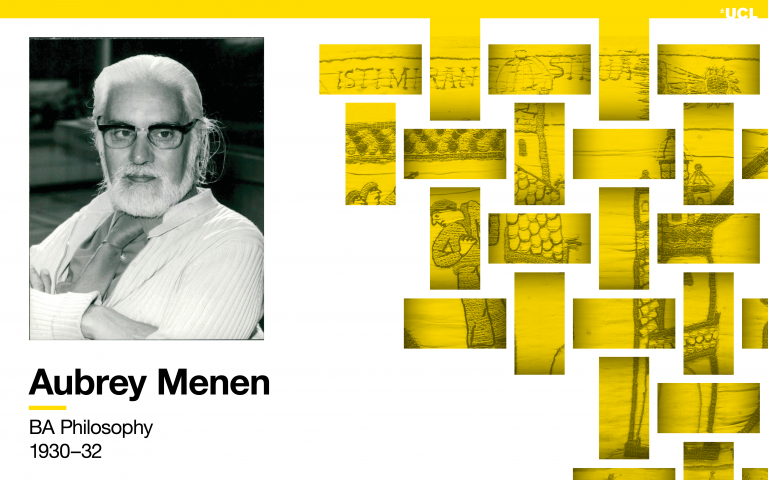 Salvator Aubrey Clarence Menen (1912–89) was a writer best known for his cutting satire. Menen’s works explored the question of nationalism and the cultural contrast between his own Irish-Indian ancestry and his traditional British upbringing. Often courting controversy, his 1954 work Rama Retold, a humorous retelling of the ancient Hindu epic Ramayana, was the first book to be banned in independent India.

Born to an Irish mother and an Indian father, Menen was brought up in Islington, later moving to Forest Hill in south London. During his time at UCL, Menen was heavily involved in student drama activities, forming his own drama group, the London Student Players, for which he wrote, directed and performed.

Living on Charlotte Street, off Tottenham Court Road, Menen made many important connections in the area, befriending the artist Duncan Grant (a former student at The Slade) who he commissioned to design sets for his productions. Grant also introduced him to many members of the Bloomsbury Group, including John Maynard Keynes and Virginia Woolf. The science fiction author H. G. Wells, a resident of nearby Marylebone, allowed Menen to adapt his novel The Shape of Things to Come in 1933, generating considerable publicity.

After graduating in 1932, Menen became drama critic for The Bookman magazine from 1933 to 1934 and then director of the Experimental Theatre in London from 1934 to 1936. As director, Menen sought to use non-conventional performance spaces to create politically engaged drama and his radical plays were often fraught with controversy. In 1934, he was sued for blasphemy and obscenity for his play Genesis II, written in response to an incident Menen had experienced at UCL, whereby he had been rejected for a bursary due to his Indian heritage.

In 1939 Menen relocated to India and found work in radio, becoming a leading personality on the airwaves. In 1948 he moved to Italy and lived there until 1980, staying near Naples. In Italy, he flourished as a writer of both fiction and non-fiction, publishing numerous books and essays during this time. In 1980 he moved back to India, spending his last years in Kerala.

Menen’s identity caused him great confusion – a foreigner in Britain due to his skin colour and a foreigner in India due to his Irish parentage and English upbringing. Raised as a Roman Catholic, Menen’s own sexuality also confused him and it was his attempts to make sense of these confusions that resulted in his widely acclaimed prose and satire. This assumed particular prominence in his 1970 autobiography The Space Within The Heart, where he stated: ‘My self-esteem was greatly restored when I discovered, like as not, I would be a homosexual. This put me immediately in the company of Shakespeare, Michelangelo, Leonardo da Vinci and less encouragingly Oscar Wilde’.