Professor Sophie Scott CBE is the director of the Institute for Cognitive Neuroscience, where she runs a lab. In 2020 she was appointed Commander of the Order of the British Empire in the Queen’s Birthday Honours, for services to Neuroscience. 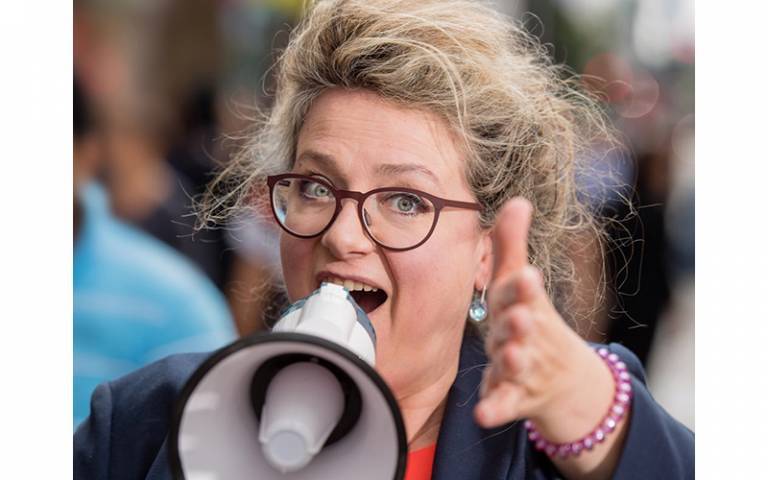 To mark International Day of Women and Girls in Science and International Women's Day, we caught up with Professor Scott to ask her about her research, her advice for women who want to follow a career in scientific research and her goals for the future.

Can you tell us about your interest in neuroscience and laughter and why you think this is an important area to study?

I was lucky to be involved is some very early functional imaging studies of human brain function, which I found extremely interesting (possibly because I have a biology background), and that drew me into cognitive neuroscience. And I came across laughter almost by accident – I was working on non verbal vocal expressions of emotion and I started looking at positive emotions. Laughter was one of the positive expressions I started to look at, and as soon as you look at laughter it kind of runs away with you – we think it’s all about jokes and laughter, but most of the time we laugh for purely social reasons. We laugh because of who we’re with and how much we like or love them, and we use laughter in very complex communicative ways. As it’s a positive emotion that lives in social interactions, this makes it very important and intriguing to study.

Is there a difference between social laughter and laughing uncontrollably at something funny?

Yes, most of the laughter we produce is communicative – we’re laughing in conversations – and that kind of laughter is very different from the kind of laughter where you are incapacitated by the laughter, you’re possibly weeping with laughter, and even if you want to stop, you can’t. We suspect that there are somewhat different brain systems involved in the control of both kinds of laugh.

Making people laugh is no doubt a part of your job! Have you found there are universal triggers for laughter?

Not in terms of humour – humour is incredibly variable across people. One reliable technique we use is that laughter is very behaviourally contagious – we often laugh just because someone else is laughing – and that’s the closest we’ve found to a universal trigger.

You are very much at the forefront of public engagement – regularly appearing on national radio and television and interviews in major media outlets. What tips would you give other researchers when it comes to public engagement?

I would say go for it – it’s incredibly rewarding, it improves your communication skills and it often leads to further opportunities. I benefited greatly from UCL’s Bright Club, which gave a lot of UCL students and staff a chance to learn stand up comedy skills. I didn’t want to do that at all when I first heard about it, and I definitely learned a lot from trying something outside my comfort zone.

In 2015 you conducted a TED Talk entitled ‘Why we laugh?’ Could you tell us about that experience and how you prepared for it?

It was really interesting – the TED people have a very clear idea of what they want you to talk about and how they want you to present it – they have a lot of meetings and discussions with you beforehand. I would have avoided putting anything personal in there, but they were really keen that I did, so I decided to make it a testament to my mum and dad. The day itself was crazy – it was really intense. You get kind of love bombed by everyone when you come off stage, which was rather lovely after all the stress beforehand.

You have done stand-up in the past as a way of communicating your research. Did you find it influenced your research on laughter, if so how? And are you still doing it?

Learning about stand up definitely taught me a lot about laughter – I had not realised how complex the relationship is between the comedian and the audience – it’s like a strange conversation. And I’m still exploring ways we can analyse the relationship – how does audience laughter spread around the room? I still do stand-up comedy, though it has been a tough year for all performers – trying to perform comedy on zoom is HARD.

I am obsessed with Richard Nixon, and have done acoustic analyses of the ‘silent’ periods on the Watergate tapes.

It’s very hard to choose just one, but I would probably say Prof Clare Elwell, from UCL Medical Physics. She is a terrific scientist, does brilliant public engagement work, and has done a great deal of work to promote women in science: she’s also doing some truly ground-breaking research looking at the effects of malnutrition on infant brains. She has managed all this while working part time since her children were born.

What do you think are the best skills that you bring to your job?

Like the majority of scientists, I truly love exploring data, the ‘pleasure of finding things out’. I am very good at making manuscripts shorter, and I’m good at reading graphs. As a director, I honestly don’t know what skills I have, if any – it’s been such a difficult year for everyone, it feels like we are all holding on by the skin of our teeth.

I want to get more writing done – with working from home and home schooling, the past year has left exactly no space for what it frankly one of the most enjoyable parts of research.

Professor Sophie Scott’s research originates in the neurobiology of speech and sound processing, where she has made fundamental contributions to our understanding of how models of auditory processing from non-human primate neurophysiology and neuroanatomy can be used to guide our understanding of the human speech processing. She also established the first systematic approach to the neurobiology of non-verbal emotional expressions, which resulted in an influential paper on the ways that amygdala damage affects the perception of fear and anger from the face and the voice. She has contributed to the fourfold increase in laughter related scientific publications since 2005 (source: Web of Science). More recently, she has been emphasising the important of studying the human voice in a social context.

Professor Scott was elected as a Fellow the Academy of Medical Sciences in 2012, and Fellow of the British Academy in 2016. In 2015 she gave the Physiology Society prize lecture. In 2017 she gave the Royal Institution’s Christmas Lectures. In 2020 she was appointed Commander of the Order of the British Empire in the Queen’s Birthday Honours, for services to Neuroscience.