Over £1million invested in ground-breaking research into epilepsy by ERUK

On Monday 20th May, to launch National Epilepsy Week, Epilepsy Research UK announced an investment of over £1 million across ten potentially life changing and lifesaving epilepsy research projects in the UK. 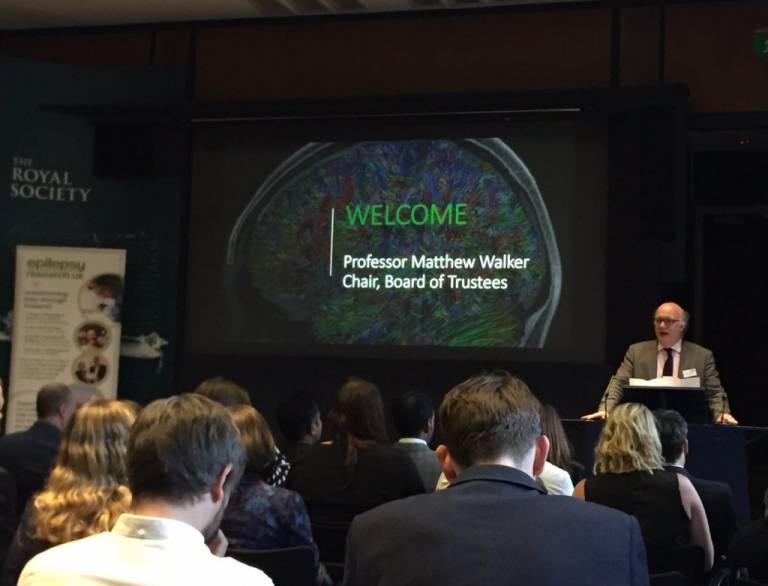 This investment brings the total amount the charity invested in scientific and clinical research to over £10 million.

Speaking at the event, Professor Matthew Walker, our Chair of Trustees, said welcomed supporters and researchers to the event and introduced ERUK’s new strategy. He said: “It is only through research that we will understand more about what causes epilepsy, how to best treat it, how to reduce the side effects of medication, how to treat those with intractable epilepsy and ultimately how to save lives.”

Professor Walker spoke about the recent work the charity has been doing, and the development of our new strategy with our Chief Executive Maxine Smeaton.

Professor Bruno Frenguelli, Professor of Neuroscience at the University of Warwick and Chair of ERUK’s Scientific Advisory Committee took to the stage next to announce the newly funded research projects.

Professor Frenguelli spoke about how each application went through a rigorous multi-stage application process, involving scrutiny by national and international epilepsy specialists before the final decision was made by the Scientific Advisory Committee. The ten newly funded research projects range in value from £25,000 to £250,000 and involve over 40 researchers across 28 institutions spanning 8 countries.

Each of our newly-awarded researchers made a short speech about their work and the potential impact this research could have for people with epilepsy in the future. For a number of the researchers who are at an early stage of their careers this funding will be transformative in enabling them to become future leaders in epilepsy research.

This is especially the case for Dr Vincent Magloire, who is ERUK’s 2019 Fellowship Award holder. His research aims to find a new therapeutic target that can stop seizures in their tracks.

It is estimated that 21 people die every week in the UK as a result of epilepsy, and two of this years’ funded projects will aim to reduce epilepsy-related deaths by investigating the mechanisms underlying sudden unexpected death in epilepsy (SUDEP). In fact, these newly funded projects bring the total ERUK has invested in research into epilepsy-related deaths to over £1million since the organisation began.

A huge highlight of the evening was our wonderful Donor Support Manager, Shona, receiving the Above & Beyond Award in recognition of 20 years of selfless commitment and dedication to Epilepsy Research UK.
Long-standing ERUK supporter John Bettelley provided some words, he said “Shona has an encyclopaedic knowledge not only of all the research that goes on, but also the people involved throughout the country for 20 years or more. Shona has always been there for us and we know that will go for very many other people too.”

Our Chief Executive Maxine Smeaton was up next to unveil ERUK’s new strategy to our supporters. Maxine said: “Now we will take our strategy from ambition to action.” The key elements of this implementation will be clear positioning of the charity, collaboration, and shared vision.

Regarding the newly funded research projects, Maxine said: “Research into the prevention, and treatment of epilepsy, as well as research into epilepsy-related deaths continues to be critically underfunded. As patients and their families search for new treatments, we hope that this investment in potentially life changing and life-saving research into epilepsy will give them hope for the future.”