Professor Bart De Strooper is director of the UK Dementia Research Institute (UK DRI) and his research group at the UK DRI at UCL interrogates the fundamental mechanisms behind Alzheimer’s and Parkinson’s disease. 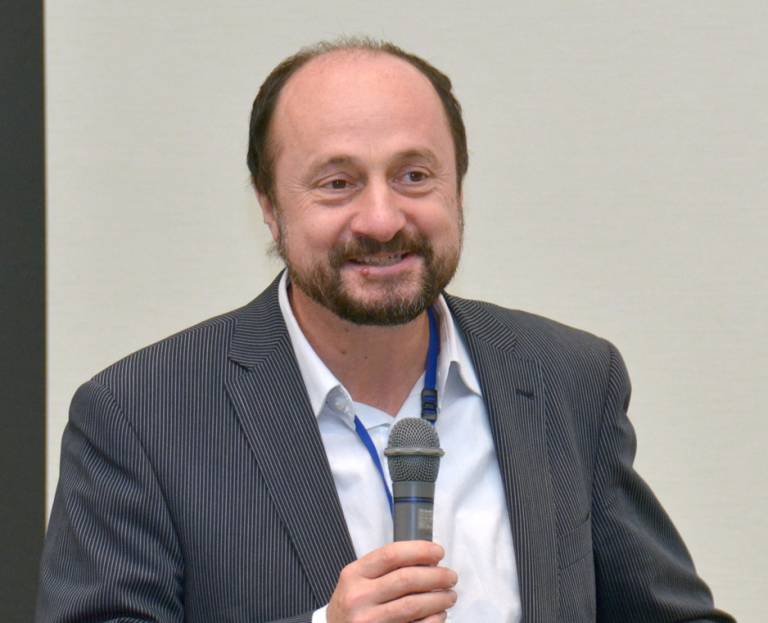 What attracted you to the area of Alzheimer's research initially?

When I began my research career, little was known about the biological processes that underlay Alzheimer’s disease. This was a situation that seemed almost incredible to me: Alzheimer’s disease was already a major health problem at that time, and I was fascinated by the idea that one could use molecular biology to understand it.

This relatively unexplored territory was very attractive to me as a young and ambitious scientist. As I began to research the area, I became more and more fascinated.

Throughout my career I have been strongly motivated to gain an understanding of the molecular processes of Alzheimer’s disease, and the core of my work demonstrates that the gene presenilin, which is the primary cause of genetic Alzheimer’s disease, is actually the protease that cleaves the amyloid precursor protein and leads to the production of amyloid plaques. I believed this held the clue to new therapies and was very excited. Since then, we learnt that Alzheimer’s disease is a complex disorder, there is considerable variation in how different people’s brains react to amyloid plaques.

My focus is to understand how brain cells react to amyloid plaque pathology and how the initial trigger for amyloid plaques induces micro- and astroglia responses, and how this all relates to Tau pathology in neurons and neurodegeneration. I am very interested in how genetic diversity affects those cellular responses and why some people are protected while other people are very sensitive to Alzheimer’s disease pathology.

The molecular biology of Alzheimer’s disease is like a complex jigsaw puzzle. Even though I have worked in this field for decades, I still get so excited and enthusiastic every time we are able to fit a new piece. Understanding how something works is fascinating. I also love to interact with young investigators who share my enthusiasm and dedication in the quest to solve this riddle and to make a difference to patients.

What would you say to someone who is considering whether to study neuroscience at UCL?

UCL is the best place in the world to study neuroscience.

The best advice I could give would be to study neuroscience at UCL and to follow your own path (I had wanted to study physics in addition to neuroscience). I would advise my younger self to do this and not to be swayed by others’ suggestions, to believe in your own capacities and path (which has taken me some time).

Professor Bart De Strooper is director of the UK Dementia Research Institute. Before this he was based at the KU Leuven in Belgium and director at the Vlaams Instituut voor Biotechnologie where he led a neuroscience department of over 250 researchers. He was elected to the Academy of Medical Sciences Fellowship in 2020, and has received several awards including the Potamkin prize, the Metlife Foundation Award for Medical Research, Alois Alzheimer’s prize, the highly prestigious Brain Prize 2018 and is Commander in the Order of Leopold I. In addition to steering the UK DRI as National Director, his research group at the UK DRI at UCL and Crick interrogates the fundamental mechanisms behind Alzheimer’s disease.