David Werring is Professor of Clinical Neurology and Honorary Consultant Neurologist at the Stroke Research Centre, UCL Queen Square Institute of Neurology and the National Hospital for Neurology and Neurosurgery. 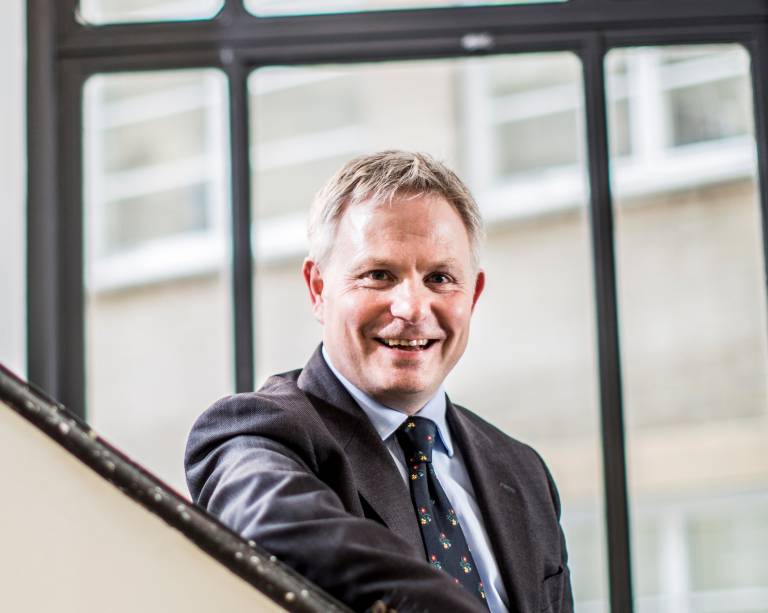 We caught up with Professor Werring to ask him about his research, what excites him most about his work and what advice he would give his younger self.

What attracted you to the area of stroke and why is it important?

Stroke – due to brain injury caused by blockage or bleeding from the brain’s blood vessels – is the second most common cause of death and a leading cause of adult disability in Europe. In the UK alone someone has a stroke every five minutes and there are over a million stroke survivors. My interest in stroke began as a junior house officer in the early 1990s; people with heart attacks were treated urgently and transferred to specialist coronary care units, while people with stroke were admitted to general medical wards with no specific interventions.

If they had a brain scan at all it was often delayed for many days. This has all changed in the last 20 years, making stroke one of the most exciting areas of medicine. We have advanced diagnostic methods including brain computed tomography and perfusion scans (done within minutes of arriving in hospital) as well as magnetic resonance imaging. And there are incredibly effective evidence-based treatments like mechanical thrombectomy and thrombolysis for ischaemic stroke. But there are still major challenges, for example the prevention and treatment of brain haemorrhage, the deadliest and most disabling type of stroke.

Much of my research is in cerebral small vessel disease – the commonest known brain disease that causes about 1 in 4 ischaemic strokes, 4 out of 5 brain haemorrhages and contributes to nearly half of all cases of dementia. I am interested in understanding and preventing strokes and dementia associated with small vessel disease, including bleeding associated with antithrombotic drugs which are frequently recommended for people with stroke.

The best research questions come from encountering clinical challenges on the wards and in clinics, so it helps that I spend half of my time doing clinical work. I do observational studies using brain imaging to understand natural history and mechanisms, and randomised controlled trials to test new treatment approaches. I have a strong interest in cerebral amyloid angiopathy, a type of small vessel disease which is emerging as a common but underdiagnosed and poorly understood cause of brain haemorrhage and dementia.

Rather than being one disease, stroke is really a clinical syndrome that can result from many different causes and mechanisms, so I am excited by the idea that treatment for people with stroke can be personalised to maximise benefit and reduce harm. Our recent work in a large international collaborative network including over 20,000 people with stroke showed that cerebral microbleeds – tiny pinpoint “silent” bleeds seen on specific blood-sensitive MRI sequences – can help predict intracranial bleeding, the most deadly and feared side effect of antithrombotic drugs.

We developed a risk score that is available on a web platform and mobile app which we hope will help doctors and patients in discussing prognosis and taking steps to minimise bleeding risk. I am also excited by the challenge of developing treatments to improve the outcome for people with cerebral small vessel diseases including cerebral amyloid angiopathy.

What would you say to someone who is considering whether to study clinical neuroscience at UCL?

I would say: “Go for it!”. UCL is a fantastic and unique place to do neurological research. We are lucky to have so many experts across the whole research pathway from basic neuroscience to advanced diagnostics, biomarkers, and definitive clinical trials that change the treatments we can offer to patients.

I’d say try not to worry or over-think things too much. By contemplating everything that could go wrong, or how difficult a project might be, you might never get started. If you pursue research questions that genuinely fascinate you (rather than following trends or what others think is interesting) then everything else should begin to fall into place.

Most importantly following true enthusiasms should make research fun and give you the inspiration to keep going when things get difficult. And if you persevere (a hallmark quality of a successful academic), you may find that projects take an unexpected turn, leading to something more exciting than you’d originally planned.

His research includes observational studies and randomised trials; a key goal is to better understand, prevent and treat intracerebral haemorrhage due to cerebral small vessel disease, including when associated with antithrombotic (antiplatelet and anticoagulant) drugs. He is Chief Investigator of the BHF-funded OPTIMAS trial investigating the optimal timing of anticoagulation in acute ischaemic stroke associated with atrial fibrillation.

He is Chair of the Association of British Neurologists Stroke Advisory Group, Stroke Specialty Lead for the NIHR North Thames Clinical Research Network, Secretary of the British Association of Stroke Physicians, Expert Advisor to the NICE guideline centre, and Chair of the UK Stroke Forum, the UK’s largest multidisciplinary stroke conference.