It is with deep sadness we announce the passing of Ursula Mittwoch aged 97. Ursula had a lifelong association with UCL. She came to the UK with her family in 1938, a 14 year old Jewish refugee from Berlin, escaping Nazi persecution.  After school in 1943, she joined Kenneth Mather as a technical assistant at the John Innes Horticultural Centre, and studied for a degree in chemistry and botany at the University of London. She started her research career at UCL in 1947 as a PhD student working on fungal genetics supervised by Hans Kalmus and went on to a postdoctoral career in the Galton Laboratories where she worked alongside JBS Haldane, Lionel Penrose and Harry Harris amongst others leading the field in genetic research at that time. Ursula remained at UCL throughout her 42 year research career, publishing nearly 200 papers, including a number of single author Nature papers before retiring in 1989. Her scientific interests were focussed on the mechanism of sex determination, the nature of the sex chromosomes, X-inactivation and gonad differentiation (for a short autobiography, 1995 American Journal of Medical Genetics 55: 3-11). Ursula was very much at home at UCL and was a regular visitor to the departmental Monday morning coffee and biscuits well into her 90s. She always happily engaged in discussing her well formulated views about sex determination. It is a great privilege and honour to have known Ursula and have her name associated with GEE. 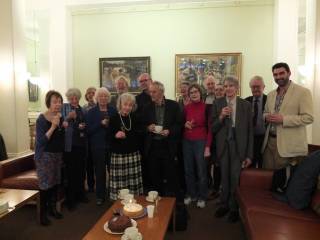