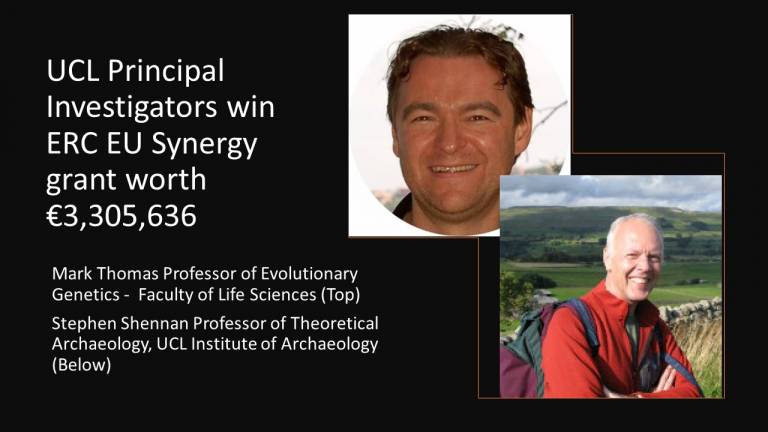 Synergy projects represent the top level of European Research Council funding, with a budget of €10 million over six years. As the name Synergy suggests, they bring together top researcher from different fields who join forces to create new, innovative researchers that could not have been achieved individually.

In the project “From correlations to explanations: towards a new European prehistory (COREX)” geneticists and archaeologists from University College London (led by Mark Thomas and Stephen Shennan) join forces with archaeologists from Gothenburg (led by Kristian Kristiansen and Karl Göran Sjögren), and geneticists from Copenhagen (led by Kurt Kjær, Eske Willerslev and Fernando Racimo).

The project will combine prehistoric human genomic, archaeological, environmental, stable isotope and climate data to better understand the processes that shaped our biological and cultural past from the time of the first farmers to the Iron Age (between 6000 to 500 BC).

Over the last 10 years ancient DNA data has revolutionised archaeology but has also created new challenges in understanding the relationship between human demographic history and the material culture they leave behind. Using new data and computer simulation techniques, this Synergy project aims to clarify how large-scale processes such as mass migrations can be caused by more local-scale behaviours, and how population-scale processes shape, and are shaped by, patterns of cultural variation.

The President of the ERC, Professor Jean-Pierre Bourguignon, commented: “The ERC Scientific Council devised the Synergy Grants to offer a space where ambitious researchers could join forces to tackle multifaceted scientific challenges. Each of the new teams is aiming at nothing less than an important breakthrough. I am especially glad to see that so many European laureates look further afield to involve top scientists and scholars working in North and South America, Australia and Japan. Not only can this enrich ERC-funded projects, but it also gives a new dimension to global research cooperation involving European teams.”

The European Research Council, set up by the European Union in 2007, is the premiere European funding organisation for excellent frontier research. Every year, it selects and funds the very best, creative researchers of any nationality and age, to run projects based in Europe. The ERC offers four core grant schemes: Starting, Consolidator, Advanced and Synergy Grants. With its additional Proof of Concept grant scheme, the ERC helps grantees to bridge the gap between their pioneering research and early phases of its commercialisation. To date, the ERC has funded over 9,500 top researchers at various stages of their careers, and over 50,000 postdoctoral fellows, PhD students and other staff working in their research teams. The ERC strives to attract top researchers from anywhere in the world to come to Europe. Key global research funding bodies, in the United States, China, Japan, Brazil and other countries, have concluded special agreements to provide their researchers with opportunities to temporarily join ERC grantees' teams. The ERC is led by an independent governing body, the Scientific Council. The ERC interim President is Professor Jean-Pierre Bourguignon. The overall ERC budget from 2014 to 2020 is more than €13 billion, as part of the Horizon 2020 programme, for which the European Commissioner for Innovation, Research, Culture, Education and Youth, Mariya Gabriel is responsible.