Hot topic: The conservation value of secondary savannas in the Brazilian Cerrado

Text and photos by Guilherme B. 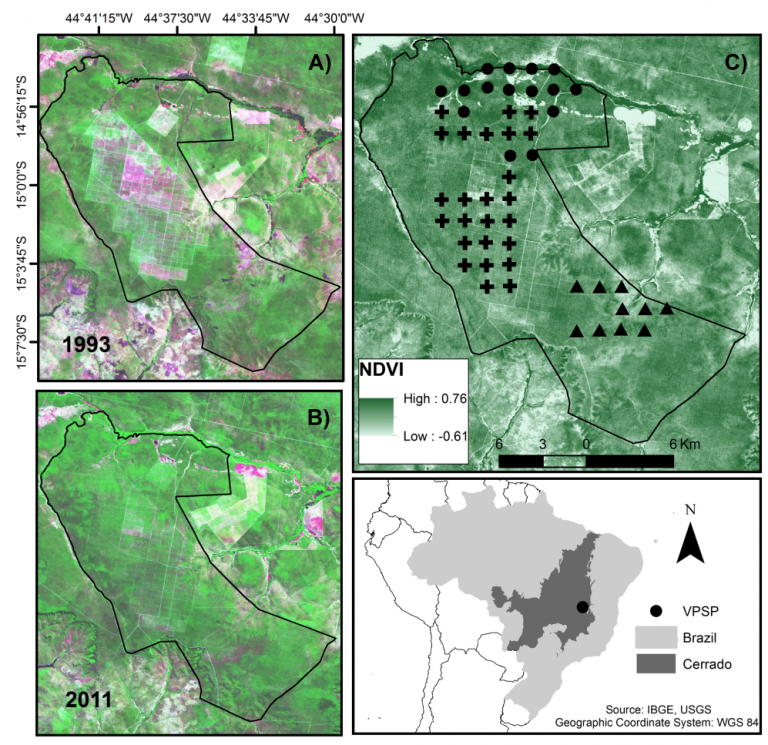 Ferreira
As an ecologist I'm familiar with the term 'secondary forest', but 'secondary savanna' is a much more obscure concept. So, how should we name an area of Cerrado - the Brazilian savanna - that has regenerated after clearcut?  And more importantly, what's the biodiversity relevance of these areas of regenerated Cerrado?
The answer to the first question, according to a recent review, is that the secondary concept (as well as the old growth one) should be equally applied to forests, savannas and grasslands. Answering the second question is much trickier, though. The regeneration and succession in Cerrado vegetation has been studied at some locations; in general it follows a path from open to dense vegetation, with an increase in tree and shrub density and a decrease in the herbaceous cover. However, while we have an idea of the differences in vegetation composition and structure between old growth and secondary savanna vegetation in the Cerrado, there is virtually no study comparing the fauna that lives in these two different environments.
To start filling this gap in knowledge we conducted a camera trap survey in a Cerrado protected area harbouring large areas of secondary as well as old growth savanna. Our study area is a perfect site to investigate the effects of secondary savanna on biodiversity because more than 1/3 of its 310 km2 have naturally regenerated after clearcut, while large portions of the state park have been kept in its natural state with little human interference.

Satellite images showing the camera trap sites and the differences in vegetation between 1993 and 2011 at Veredas do Peruaçu State Park, south eastern Brazil

The results of this survey have just been published online at the journal Biotropica and they show that secondary savannas may play an important role for large mammal conservation in the Brazilian Cerrado. Despite the large areas of secondary vegetation, Veredas do Peruaçu State Park sustains a rich and diverse large mammal fauna. Our camera traps recorded more than 800 short videos of 18 large mammal species, some of them globally threatened and one even considered regionally extinct - the bush dog (Speothos venaticus). More importantly, we found no evidence that secondary savannas have negative impacts on large mammals. The probability that one of our camera traps would be triggered by a large mammal species did not depend on whether the vegetation was secondary or mature. A very important thing to note, though, is that not all secondary savannas will sustain high levels of biodiversity. As with other secondary habitats, to achieve a high conservation value the area should retain key ecological attributes, such as: low disturbance or protection during regeneration, presence of old growth vegetation in the surroundings, relatively short duration of the impact, and occurrence of seed dispersal fauna. If at least some of these things take place, then large mammals can recolonize and use secondary vegetation that regenerated from clearcut in the Cerrado.