From DNA evidence in crime cases to population-wide studies of genetic disease, immensely-powerful DNA technology is transforming our world. Understandably, members of the public tend to respect and trust scientific professionals who can wield these powerful new tools.

It is also inevitable that some will seek to abuse this trust, often with a commercial motive but sometimes the motive seems to be promotion of a world view or political philosophy.  In these pages we will focus on "genetic ancestry" testing: the use of your DNA to make statements about your "deep ancestry", such as where your ancestors lived hundreds or even thousands of years ago, and perhaps their cultural identities (such as Celts, Vikings, Mongols etc). This type of testing is distinct from genetic genealogy which uses DNA in combination with genealogical and historical records, and which is therefore mainly focused on recent centuries.

Genetic technology can tell us about the DNA of people alive today in different parts of the world.  Recently, exciting progress has been made in recovering DNA from ancient burial sites, but it remains broadly true that making inferences into the past from DNA requires assumptions and mathematical models, and input from other fields such as history, archaeology and studies of historic geography and climate.  New DNA genotyping and sequencing technology, and improved statistical models, have accelerated progress, but inferences still need to be accompanied by caveats about the assumptions and approximations made, and by assessments of uncertainty.

We all love stories about our past, and for many it's too tempting to cut corners, draw inferences based on only superficial analysis of the data, and ignore the uncertainty.  A public unaware of the distinctions may be misled into thinking that DNA-based inferences about the past are as reliable as a DNA profile match.  Usually they are not.

We have created these web pages to help interested non-scientists to be skeptical consumers of genetic ancestry information, and to try to distinguish genetic ancestry from genetic astrology.  We highlight some of the doubtful claims that have been brought to our attention: scientific-sounding claims that we think are flawed, exaggerated or not well supported by the evidence, and that appear to be driven by a commercial motive or some agenda other than the advancement of knowledge.  We also aim to help readers find some of the best available scientific evidence, and provide an overview of what can and can't be said about genetic ancestry.

Many have contributed to these pages, the primary authors are

The selection of material for inclusion on this site is somewhat ad hoc in nature, and these pages are constantly evolving. Feedback and comments are most welcome, for example, suggestions for bad genetic ancestry science to include on these pages. You can use the feedback form below, or email us. Note that we are unable to offer individual advice on testing. We suggest that you ask for advice on one of the many genetic genealogy mailing lists and forums listed in the ISOGG Wiki.

Note: Most of these pages refer to concerns raised between 2012 and 2017, when a lot of marketed tests targeted mtDNA and the Y chromosome. The technologies have moved on somewhat and nowadays most 'ancestry testing' companies look at genetic variants across the genome. This alleviates many of the issues we raise in these pages, but there are still issues to be confronted.

Other Dubious Commercial and Media Claims

Genetic ancestry testing is the use of DNA information to make inferences about someone's "deep" ancestry, hundreds or thousands of years into the past. Genetic genealogy on the other hand combines DNA testing with genealogical and historical records, and typically makes use of large databases to identify matches, or direct comparisons to test for expected matches. There is some overlap between the two, but genetic genealogy is generally more reliable because of its use of additional information: the information about your ancestry available from DNA alone is limited, as we try to explain here. 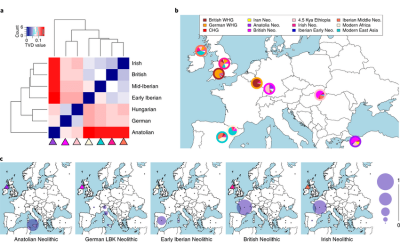 Some of the individuals who have contributed to this website have had interactions over many years with Dr Eran Elhaik, a geneticist who is now based at the University of Lund in Sweden. Some of the exchanges have taken place in the peer-reviewed literature but in recent years we have been subjected to numerous defamatory comments in blog posts and on social media. Elhaik has previously been involved in a number of controversies with other researchers and other colleagues have similarly been subjected to unwarranted personal attacks. In order to set the record straight we have published a detailed timeline showing the various interactions over the years between all the parties concerned so that readers can make up their own minds. We have also prepared declaration statements to counter the false claims of conflicts of interest.

Here we document our interactions with BritiansDNA, a now-defunct 'genetic ancestry testing' company that made a number of false claims in the media and on their own websites. We are making the full story public because we believe there are important principles at stake:

(1) Our major concern was the use of legal threats to try to silence criticism. We hope that this example will encourage others who have received similar threats to stand up for their principles. The threat is often bluster without substance and we should all make a stand against bullying.

(2) The exaggerated claims made by BritainsDNA misled the public about what is possible from genetic testing. Some of their stories were ludicrous, which undermines the efforts of scientists who are more careful about the degree of uncertainty associated with their findings. We hope that this case will encourage better communication of genetic testing information to the public. Note that our concerns are related to the inferences made from "deep ancestry" tests, and not genetic genealogy testing that combines DNA analysis with genealogical and historical records.

(3) The for-profit status of BritainsDNA was never revealed by the press and the BBC, who only described it as "research" or a "project", thus disguising its commercial nature. Crucially none of the "research" appears to have gone through the scientific process of peer review. We hope to make editors more aware of the dangers of covert advertising masquerading as science of public interest.

(4) We believe it is important that scientists are transparent about apparent conflicts between commercial and academic interests. BritainsDNA's Chief Scientific Officer, Dr Jim Wilson, is a director of the company and a major stakeholder, but the TV and press coverage only mentioned his role as a researcher at Edinburgh University. We hope that editors will take more care to disclose such conflicts of interest, and that academics will be more forthcoming about them.

Timeline of the Saga

Other Dubious Commercial and Media Claims

Some authors manage to attract attention to their favoured theories while avoiding the scrutiny of academic peer review.  They may bypass the peer review process by publishing their ideas in a book, or in what appear to be legitimate scientific journals, but which may only have a facade of academic respectability. The growth of open access publishing (which generates income by charging fees to authors for publishing their papers) has led to many new journals, some with low standards, and it can be difficult for the casual reader to distinguish between the legitimate and the quasi-scientific journals.

Jeffrey Beall, a research librarian at the University of Colorado, compiled a list of questionable open access publishers and journals. He no longer maintains the original list and it has been taken down but an archived version with links to updates is available here.

Here we highlight doubtful claims that have been made in the press or on TV which we think are flawed or not well supported by evidence, as well as dubious claims from businesses related to genetic ancestry testing.