The recent open-access article 'A genome-wide association scan in admixed Latin Americans identifies loci influencing facial and scalp hair features' got considerable coverage in print and online media, TV & radio interviews. Some of the media coverage is collected here. The statements presented in these articles, however, are those of the corresponding journalists, and are not necessarily the authors' positions. The official press release is also provided below.

Joint press release from UCL and University of Bradford:

The first gene identified for greying hair has been discovered by an international UCL-led study, confirming greying has a genetic component and is not just environmental.

Published today in Nature Communications, the study analysed a population of over 6,000 people with varied ancestry across Latin America to identify new genes associated with hair colour, greying, density and shape, i.e. straight or curly.

"We already know several genes involved in balding and hair colour but this is the first time a gene for greying has been identified in humans, as well as other genes influencing hair shape and density," said lead author, Dr Kaustubh Adhikari, UCL Cell & Developmental Biology.

"It was only possible because we analysed a diverse melting pot of people, which hasn't been done before on this scale. These findings have potential forensic and cosmetic applications as we increase our knowledge on how genes influence the way we look."

The findings could help develop forensic DNA technologies that build visual profiles based on an individual's genetic makeup. Research in this field has previously used samples from people of European descent, but these new results could help forensic reconstructions in Latin America and East Asia.

The gene identified for grey hair - IRF4 - is known to play a role in hair colour but this is the first time it has been associated with the greying of hair. This gene is involved in regulating production and storage of melanin, the pigment that determines hair, skin and eye colour.

Hair greying is caused by an absence of melanin in hair so the scientists want to find out IRF4's role in this process. Understanding how IRF4 influences hair greying could help the development of new cosmetic applications that change the appearance of hair as it grows in the follicle by slowing or blocking the greying of hair.

Professor Andres Ruiz-Linares, UCL Biosciences, who led the study, said: "We have found the first genetic association to hair greying, which could provide a good model to understand aspects of the biology of human aging. Understanding the mechanism of the IRF4 greying association could also be relevant for developing ways to delay hair greying."

Another gene, PRSS53, which was found to influence hair curliness, was investigated by the University of Bradford's Centre for Skin Sciences as part of the study.

"The PRSS53 enzyme functions in the part of the hair follicle that shapes the growing hair fibre, and this new genetic variation, associated with straight hair in East Asians and Native Americans, supports the view that hair shape is a recent selection in the human family."

The scientists found additional genes associated with hair including EDAR for beard thickness and hair shape; FOXL2 for eyebrow thickness and PAX3 for monobrow prevalence.

"It has long been speculated that hair features could have been influenced by some form of selection, such as natural or sexual selection, and we found statistical evidence in the genome supporting that view," added Dr Adhikari. "The genes we have identified are unlikely to work in isolation to cause greying or straight hair, or thick eyebrows, but have a role to play along with many other factors yet to be identified."

The team collected and analysed DNA samples from 6,630 volunteers from the CANDELA cohort recruited in Brazil, Colombia, Chile, Mexico and Peru. After an initial screen, a sample size of 6,357 was used, at 45% male and 55% female. This group included individuals of mixed European (48%), Native American (46%) and African (6%) ancestry, giving a large variation in head hair appearance.

Both men and women were assessed for hair shape, colour, balding and greying, but only men were tested for beard, monobrow and eyebrow thickness. Visual traits for each individual were compared to whole genome analysis results to identify the genes driving differences in appearance.

These were then checked against existing databases of different populations to see if the differences made sense based on previous knowledge and were under selection.

UCL's contribution to this work was kindly funded by the Leverhulme Trust and Biotechnology and Biological Sciences Research Council (BBSRC).

A piece from the 'Mac' cartoon series published in the Daily Mail, UK. Drawn by Stanley McMurtry. 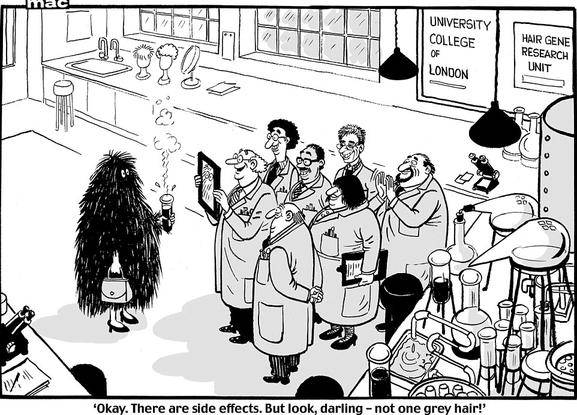 Cornishman: End of grey hair in sight as scientists discover the gene responsible

Daily Mail: Getting to the root of grey hair: Scientists discover why we lose our youthful locks and say they could one day prevent it

Mirror: Grey hair' gene discovered by scientists in breakthrough which could one day 'block' silver locks

Sky News: Grey Hair Gene Found... But Can It Be Stopped?

The Times: End of grey hair in sight with gene discovery 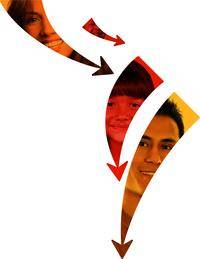