Videos showing for the first time how small circles of DNA adopt dance-like movements have been developed by a team led by researchers at UCL and the Universities of Leeds, York and Sheffield. 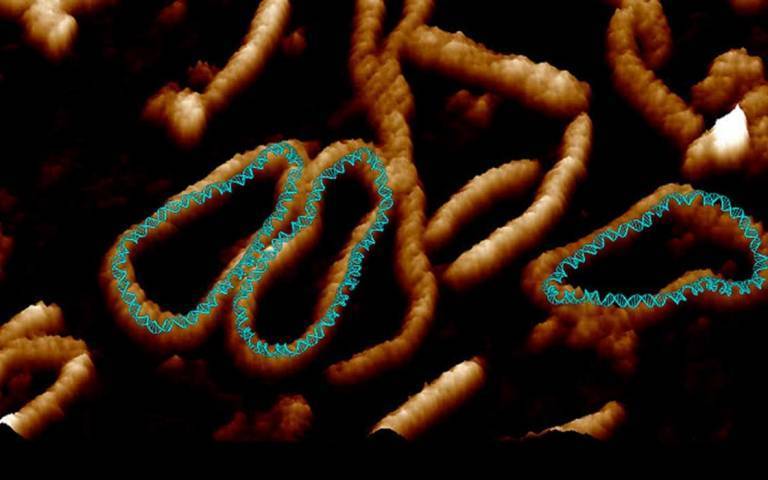 The footage is based on some of the highest resolution images of a single molecule of DNA ever captured, with DNA seen to “dance” in microscopy data recorded at the London Centre for Nanotechnology at UCL.

The images show in unprecedented detail how the stresses and strains that are placed on DNA when it is crammed inside cells can change its shape.

Co-lead author Dr Alice Pyne (University of Sheffield and the London Centre for Nanotechnology at UCL) said: "Seeing is believing, but with something as small as DNA, seeing the helical structure of the entire DNA molecule was extremely challenging.

"The videos we have developed enable us to observe DNA twisting in a level of detail that has never been seen before."

Co-author Professor Bart Hoogenboom (London Centre for Nanotechnology at UCL) said: "These high-resolution images of DNA are a culmination of many years of microscopy research at the London Centre for Nanotechnology. The great advance here is that we have been able to match them with computational modelling by our collaborators, thus enabling us to provide an interpretation of how DNA twists down to the atomic details."

The images are so detailed it is possible to see the iconic double helical structure of DNA, but when combined with the simulations, the researchers were able to see the position of every single atom in the DNA and how it twists and writhes.

Dr Agnes Noy, of the University of York, who did the theoretical modelling in the study, said: “The computer simulations and microscopy images agree so well that they boost the resolution of experiments and enable us to track how each atom of the double helix of DNA dances."

Every human cell contains two metres of DNA. In order for this DNA to fit inside our cells, it has evolved to twist, turn and coil – a process called supercoiling. That means that loopy DNA is everywhere in the genome, forming twisted structures which show more dynamic behaviour than their relaxed counterparts.

To investigate how this process works, the research team studied small "packets" of genetic information called DNA minicircles, engineered and isolated from bacteria. DNA minicircles are special because the molecule is joined at both ends to form a loop. This loop enabled the researchers to give the DNA minicircles an extra added twist, making the DNA "dance" more vigorously.

When the researchers imaged relaxed DNA, without any twists, they saw that it did very little. But when they gave the DNA an added twist, it suddenly became far more dynamic and could be seen to adopt some very exotic shapes.

These exotic "dance moves" were found to be the key to finding binding partners for the DNA.

Gene therapy is the use of nucleic acids such as DNA to repair, replace, or regulate genes to prevent or treat human disease. In the past few decades, hundreds of gene therapy candidate genes have been uncovered, yet very few of these have turned into target therapies because of the challenge of delivering the gene therapy.

Dr Sarah Harris, of the University of Leeds, who supervised the research, said: "The laws of physics apply just as well to the molecules that make up living systems as to sub-atomic particles and galaxies. The synergy between our experiments and computer models shows we are beginning to understand the physics underlying supercoiled DNA.”

The study also involved researchers from the John Innes Centre, Norwich, the University of Liverpool, and the Baylor College of Medicine in Houston, Texas.

Credit: University of Sheffield for image.