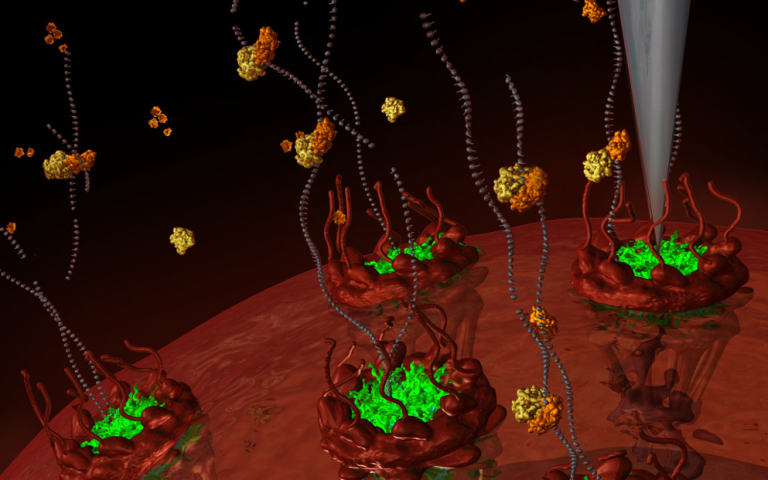 In 2017, Professor Bart Hoogenboom (London Centre for Nanotechnology, and Department of Physics & Astronomy) received funding through the UCL-Toronto Strategic Partner Funds. This joint seed-funding scheme has been designed to encourage academic collaboration between the two institutions.

Professor Hoogenboom is collaborating with the University of Toronto’s Professor Anton Zilman in the field of biological physics. The aim of their collaborative research is to understand a transport mechanism within cells that determines entry into and exit from the control centre of the cell, the cell nucleus. This transport mechanism controls multiple processes in the cell and is involved in various diseases.

In the long run, the research has the potential to inform better therapies for treating illnesses like ALS and cancer and to identify anti-viral therapies for viruses such as Hepatitis B.

Understanding the fundamentals of life

Professors Hoogenboom and Zilman explain that if the transport mechanism between a nucleus and the rest of the cell doesn’t work, the cell dies. “It’s a life and death problem, a fundamental mechanism that is crucial for survival.” Yet this transport mechanism can be subverted by certain viruses to attack cells, tricking the gatekeeping proteins in the nucleus into letting them in.

They highlight the fact that we lack the full knowledge of how the transport mechanism works. Understanding this “machinery” could aid the development of effective cures for a range of life-threatening illnesses.

The project investigates how a physics-based approach, using mathematical modelling and biophysical experiments on the nanoscale, can be used to understand this biological phenomenon. Professors Hoogenboom and Zilman explain that one of the intriguing properties of the transport mechanism between cells is its selective nature. They describe it as a “molecular sieve”, which might “let through rice grains, but won’t let through caster sugar” depending on the properties of the molecules.

This sieve, however, consists of a rather disordered arrangement of flexible molecules, which makes it difficult to understand how the transport works. The researchers are applying their experience of analysing complex polymeric materials to this problem.

Combining the abstract and experimental

Professor Hoogenboom says that when the call for seed funding came up, he and Professor Zilman realised they were doing very similar work. He explains that a strength of the partnership is that both sides bring different areas of expertise to the table.

“He's really a theoretical physicist, I'm an experimental physicist… so that is pretty complementary,” he says.

Professor Hoogenboom adds that the strength of this collaboration is the combination of both approaches. “If you try to model something…there are different ways of doing it. Physicists will tend to make it as analytical as possible, like a neat equation, because if you can create a neat equation, you can predict how things will go if you change parameters”.

“But most problems we deal with, and this is one of the examples, are too complex to solve in a simple mathematical way,” Professor Hoogenboomsays. Professor Zilman concurs: “The nature of these biological mechanisms is so complex that no single person can be expert in all aspects of the problem and in all techniques necessary to tackle it”. This is why it is so important to have a seamless combination of experiment and theory.

The seed funding has enabled the academics to build a relationship and have face-to-face visits.

“It’s always good to have external expertise, someone else who knows a lot about your subject, to look at your work and then say, have you thought about that, have you thought about that, or wouldn’t you be better trying this,” Professor Hoogenboom explains. He adds: “Virtual communication works so much better once you’ve established a personal relationship with someone”.

Professor Zilman agrees that the face-to-face visits have been invaluable in charting the further research directions.

Professor Hoogenboom and Professor Zilman believe that the research will provide mechanistic understanding that may inspire new solutions for nano-bio-technology applications, with the potential to address the challenge of how to quickly and reliably identify the type of viral infection affecting a patient.

“One of the big medical problems we have is that when someone has a viral infection, how do you figure out which virus it is and which strain? Different variations of the same type of viruses often need different treatments,” explains Professor Hoogenboom. The research project could make identification easier and, as a consequence, potentially lead to better and more timely treatment.

Professor Zilman adds: “Beyond potential medical applications, understanding the mechanism of selectivity can have important applications in other areas of nano-technology such as molecular sorting.”