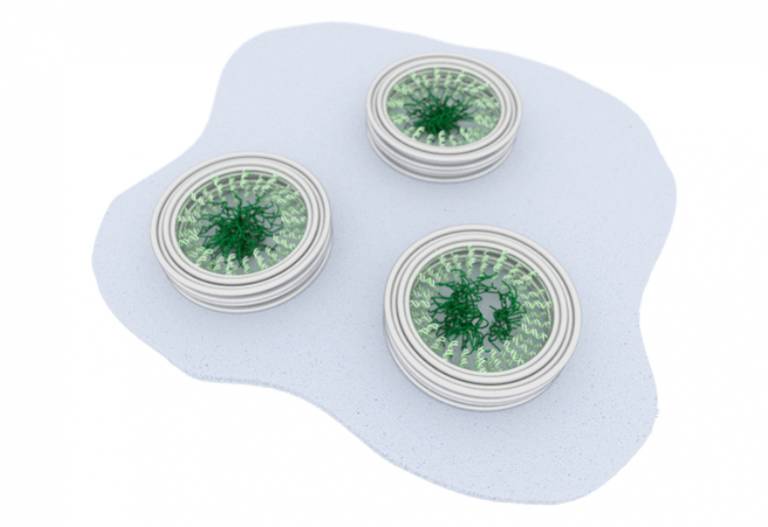 The study, published in ACS Nano, shows how DNA can be folded using ‘DNA origami’ to form a cylinder more than 1,000 times smaller than the width of a hair. This cylinder can then be filled by the proteins that in our body selectively transport material into and out of the nuclei of our cells, resulting in a ‘nano-pore’ filter.

“We don't have a good understanding of how the complex machinery in our cells filters, for example, RNA out of and – to our detriment – viruses into the cell nucleus. Our nanopore mimics the system, but has been built from the bottom-up, allowing us to add in complexity step by step, such that we can identify the minimal requirements for nuclear import and export selectivity,” explained study co-author and PhD student Bernice Akpinar (UCL London Centre for Nanotechnology, and Imperial College London Department of Chemistry), who spent three months at Yale in the context of this project.

“We were inspired by the way our body selectively protects the genetic material located in each cell nucleus,” explained co-author and PhD student Luke Davis (UCL London Centre for Nanotechnology, and UCL Physics & Astronomy). “This is done by spaghetti-like proteins in filters that are called nuclear pore complexes. These filters are super-selective, but as the name suggests, they are rather complex.”

This collaborative study was initiated at the Yale School of Medicine by senior authors Professor Patrick Lusk and Professor Chenxiang Lin. Professor Lusk said: “For a long time, biologists have struggled to grasp how molecules are blocked from entering the cell nucleus so efficiently. Now, using DNA origami, we can make and control these bio-inspired systems and have a very powerful tool to start understanding how complex biological machinery works.”

The next step for the team is to investigate how such a nanopore responds to different proteins that can or cannot pass the biological filters by which it was inspired. Then it can be embedded into a device for measuring transport and the actual filtration function.

Professor Bart Hoogenboom (UCL London Centre for Nanotechnology, UCL Physics & Astronomy, and UCL Institute for the Physics of Living Systems), who supervised the UCL part of this research, said: “A few years ago, we predicted that filtering proteins would be able to switch the pores between open and closed states. It has been very rewarding to see that type of behaviour in a bio-inspired device.”

In the longer term, the nanopore which acts as a nano-scale filter could be used to develop bio-inspired devices for filtering and detoxification.

He added: “In terms of applications, we think molecular filters may be useful in preventing background proteins from reaching detector devices and sensing technologies, reducing background noise and improving efficacy. We also think the insights we gain on the nano-scale model system will inform the design of larger scale filters for purification, detoxification in other contexts.”

The work was kindly supported by the Engineering and Physical Sciences Research Council (EPSRC) and by the National Institutes of Health (NIH). PhD student Bernice Akpinar is part of the joint UCL/Imperial College London Centre for Doctoral Training in the Advanced Characterisation of Materials.