The Institute of Physics (IOP) has announced the winners of their medals and prizes for 2016, in recognition of outstanding work by physicists in research, leadership, outreach and engagement.

Sixteen medal winners have been announced, including Dr Alexandra Olyaya-Castro (UCL Physics & Astronomy) for her contributions to the theory of quantum effects in biomolecular systems. The award particularly recognises her work on the understanding of exciton-vibration interactions and the emergence of nontrivial quantum behaviour in photosynthetic complexes. 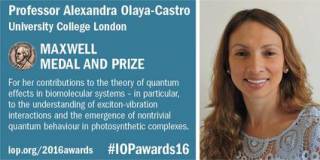 President of the IOP, Professor Roy Sambles, said of all those winning awards this year: “The IOP Awards recognise outstanding individuals and teams within our physics community, not only to celebrate their creativity, hard work and dedication but also to inspire others to strive to achieve excellence in what they do.”

Dr Alexandra Olaya-Castro has played a central international role in the field of quantum biology, an emergent interdisciplinary research area aimed at understanding whether quantum-mechanical phenomena are important for the function of biomolecules.

By making use of modern theoretical quantum science, which focuses on identifying quantum-enhanced performance, together with techniques in physical chemistry and biology, she has pioneered a new generation of theoretical approaches for understanding quantum effects in photosynthesis.

She has since lead research at UCL to push the boundaries of our understanding of the quantum dynamics of electronic excitations in the initial stages of photosynthesis, and the influence of quantum coherence.

The conceptual importance of her work has been widely recognised both in the UK and worldwide, and the research that Olaya-Castro is leading will be showcased at the UK’s Royal Society Science Summer exhibition 2016.

The ability of biological molecules to replicate themselves is the foundation of life, and it usually involves a complex cellular machinery. However, certain protein structures promote their own replication, without any additional assistance. One example is the self-replication of pathological protein fibrils, called amyloids, involved in neurodegenerative disorders, including Alzheimer’s and Parkinson’s. It is these fibrils, when intertwined and entangled with each other, that for instance form plaques in the brains of Alzheimer’s patients.

Spontaneous formation of the first amyloid fibrils is very slow, and it typically takes several decades. But once the first fibrils are formed, they catalyse their own replication. This process leads to the fast proliferation of pathological species involved in the diseases, making it extremely challenging to control. Despite its importance, the fundamental mechanism of how protein fibrils can self-replicate, without any additional machinery, is not well understood.

The results of Saric et al. suggest that controlling the deposition of monomeric proteins onto the surface of the existing protein fibrils may represent a fruitful strategy for limiting the spreading of pathological protein aggregates in a disease context. Moreover, these findings may be of great interest for nanotechnology, where achieving efficient self-replication in manufacturing of nano-materials is one of the unfulfilled goals.