The panopticon penitentiary, from the Greek παν- ('all') and -οπτικος ('seeing') was based upon an idea of Jeremy's younger brother, Samuel, who while working in Russia for Prince Potemkin, hit upon the 'central inspection principle' which would facilitate the training and supervision of unskilled workers by experienced craftsmen.

Jeremy came to adapt this principle for his proposed prison, an 'Inspection House' envisaged as a circular building, with the prisoners' cells arranged around the outer wall and the central point dominated by an inspection tower. 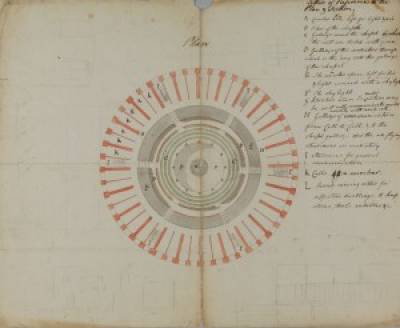 From this building, the prison's inspector could look into the cells at any time-and even be able to speak to the prisoners in their cells via an elaborate network of 'conversation tubes'-though the inmates themselves would never be able to see the inspector himself.

Assuming that the omnipotent governor was always watching them, Bentham expected that this 'new mode of obtaining power of mind over mind, in a quantity hitherto without example' would ensure that the prisoners would modify their behaviour and work hard, in order to avoid chastisement and avoid punishment.

The idea of constant, overbearing surveillance is certainly unsettling, but the panopticon and its central inspection principle would, Bentham argued, have multifarious benefits:

Bentham commissioned the architect Willey Reveley to make plans and drawings for the Panopticon. Box 119 of the Bentham Papers, in the care of UCL Library Special Collections, contains these items as well as many of Bentham's writings on the Panopticon. Digitised versions of the manuscripts are available at Transcribe Bentham, and interested parties are invited to assist the Bentham Project by transcribing them.

Panopticon Pandemonium is a computer game which brings to life the complexities and ambiguities of Bentham's prison scheme.  It sees the construction-virtually-of a working panopticon for the first time. The player, assisted by Bentham himself, acts as governor of the prison and has to balance economies of the social benefits of Bentham's vision-happiness, rehabilitation, work-against the functions of discipline, punishment, and surveillance, while also ensuring that their panopticon is orderly and profitable.

Were any Panopticons built?

The following prisons, some of which no longer exist, reflect Bentham's ideas for the Panopticon. However none of them conforms precisely to the detailed drawings, nor to Bentham's principles of management - the key to which was unobserved inspection. One lasting legacy of Bentham' s plan to build and manage a panopticon prison is Tate Britain, the art gallery, which stands on the banks of the River Thames on the site bought by Bentham for his prison.

That its design is 'panoptic' is a claim made for many prisons such as Kilmainham Gaol, Dublin, which was based on the very influential design of Pentonville Prison, built in London in 1842.

Buildings designed for other purposes have also been called panopticons and yet other buildings resemble the Panopticon design by virtue of their circular plan.

Italy, Siena. The Padiglione Conolly was part of the now decommissioned Psychiatric Hospital San Niccolo. Designed by Francesco Azzurri, the Padiglione opened in 1876. Find out more about the Padiglione in a short article by Dr. Alessandro Spina and Dr. Andrea Friscelli (PDF).

Italy, Santo Stefano. (80 miles south of Rome, and 40 miles offshore in the Tyrrhenian Sea, in the Pontine Archipelago). A panopticon style prison was established on this island in 1795. It closed in 1965.

Portugal, Security Pavilion, Museum Infirmary, the museum of the Hospital Miguel Bombarda in Lisbon. The Security Pavilion (1892-1896) was designed to be a forensic prison infirmary for patients from the penitentiary, or other patients considered dangerous, and should not be confused with a typical psychiatric ward from the period. It functioned from 1896 to 2000, when it was closed. In 2001 it was declared a monument of public interest by IPPAR (Instituto Português do Património Arquitectónico).

Netherlands
More information will be available shortly on three panopticons which have recently been renovated by the Dutch government, including two late nineteenth century panopticons in Arnhem and Breda (Architect, J.F. Metzelaar).

Russia, St Petersburg. Designed and supervised by Samuel Bentham, the St Petersburg panopticon was a school rather than a prison. The Panopticon School of Arts, begun in 1806, was destroyed by fire in 1818. The Russian State Naval Archive has given permission for the reproduction of an architectural drawing (1810) of the building.

Australia
The Round House Fremantle. An image of the sign at the Round House states that the architect Henry Willey Revely 'may have been influenced by Jeremy Bentham's plan for the model prison'. This is particularly interesting in view of the fact that H. W. Reveley (1788-1875) was the son of Willey Reveley (d.1799), the architect who drew up the original plans for the Panopticon in London.