Reflections on why the low carbon transition may be much cheaper than models predict, from Senior Research Associate Paul Drummond. 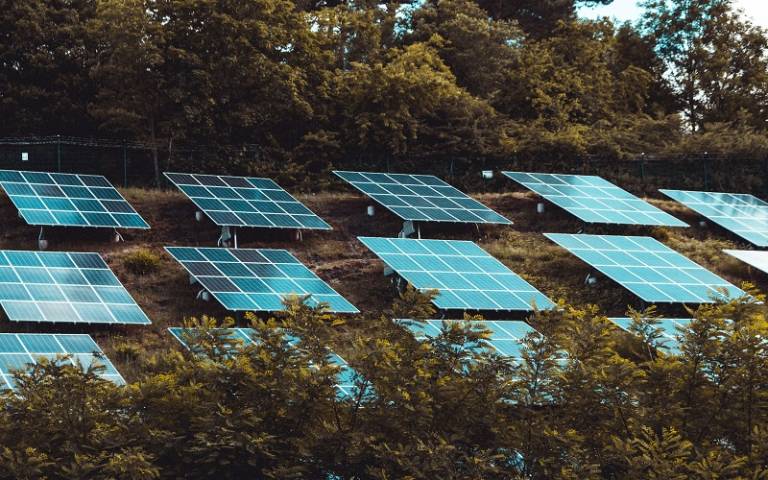 To achieve net-zero emissions by mid-century, global energy systems must undergo a wholesale switch to low-carbon and energy-efficient technologies. Government decarbonisation strategies often draw heavily on the outputs of integrated assessment models (IAMs) that attempt to represent the energy system and economy. These models select combinations of energy-supply and energy-using technologies to achieve decarbonisation with the lowest total cost over time.

However, the representation of innovation in such models often doesn’t reflect the reality. Understanding and driving innovation is key for achieving decarbonisation and sustainable development more broadly. This is an important area of research for the UCL Institute for Sustainable Resources (UCL ISR).

However, such models overlook findings from a vast literature showing that the costs of these technologies decline as a result of their use. Our paper in Environmental Research Letters   , published earlier this year, draws on evidence from more than 200 journal articles and concludes that policies promoting such “induced innovation” have been a clear factor behind the remarkable success of low-carbon technologies. This suggests that not only is urgent action essential to drive the clean energy transition, but the transition itself may also end up much cheaper than often predicted.

Although the role of ‘technology-push’ policies in driving innovation, such as public R&D funding, is well known, the role of ‘demand-pull’ drivers has been less well recognised. Such drivers can take various forms, from “market-wide” phenomena such as rising energy and carbon prices, or “targeted” policies such as technology subsidies or regulations.

Different drivers appear to induce innovation in different ways. Rising energy and carbon prices do incentivise the development of lower-cost or lower-carbon technologies, but such innovation has so far been quite incremental, and encourage developments like more efficient fossil-fuelled vehicles, rather than electric or hydrogen technologies.

We also found that firms are much more likely to innovate in a way and direction they have done before, producing accumulation effects, and that the wider policy environment is highly important, with factors such as overall policy coherence and consistency, future policy expectations and institutional context can have a strong influence on the propensity to innovate.

Patent applications are by far the most common measure of innovation, largely because data is widely available, quantifiable and detailed. However, they provide only a partial picture. Patents are a good measure of innovative “activity”, but not of “outcomes” such as reductions in technology cost.

Examining the full link between demand-pull drivers and outcomes is highly complex. However, we attempt to partially bridge this gap by including studies deriving “experience curves” and associated “learning rates” – the percentage reduction in cost for each doubling of cumulative deployment – for low-carbon technologies deployed as a result of demand-pull policies.

Solar photovoltaics (PV) and wind energy were by far the most studied technologies we considered, with solar PV experiencing a learning rate averaging around 20% for much of the last 40 years. This has led solar PV from a position of being a highly expensive way of generating electricity, to the International Energy Agency (IEA) now believing it to offer the “cheapest electricity in history”. Much of this cost reduction can be attributed to learning-by-doing and economies of scale that come when a new technology is deployed and the supply chains and markets around it develop.

To drive the low-carbon transition, and potentially achieve an energy system that in the long run is cheaper than the fossil-fuel based system we have today, it is crucial that policymakers and those advising them are aware of these complexities and recognise the opportunities that early, large-scale investment may offer.

Photo by Moritz Kindler on Unsplash

This article has been written by Paul Drummond as part of our 'Directing innovation for sustainable development' research theme in celebration of 10 years of the UCL Institute for Sustainable Resources.