The shape and pace of change

Solar PV, wind power and electric vehicles are increasingly prevalent in attempts to address climate change. But what are the future prospects for these crucial low carbon technologies? Senior Research Fellow Dr Nick Hughes elaborates on the future of these carbon cutting tools. 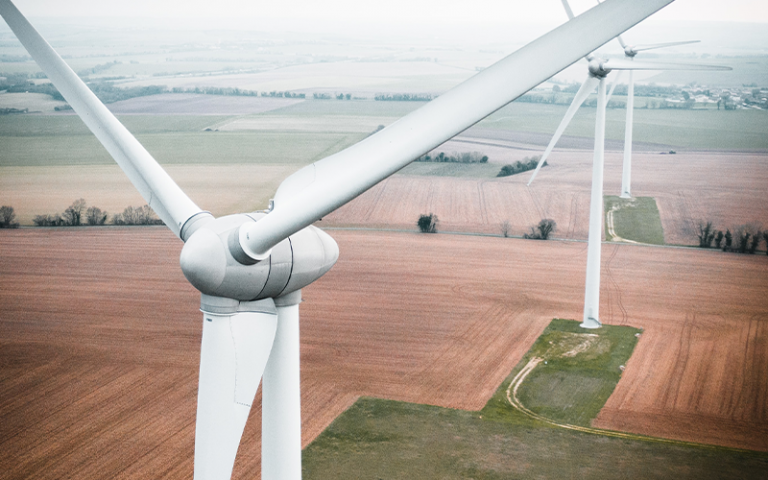 The task of cutting carbon emissions to address climate change has for decades been perceived primarily as a costly activity. This is because low carbon alternative technologies have typically been more expensive than their conventional fossil-fuelled equivalents.

This underlying perception has continued to animate international climate negotiations. If cutting carbon is costly, then the question of who has the responsibility to cut furthest and fastest remains deeply political, and strongly connected to questions of responsibility for past emissions, and current access to the financial resources necessary to fund action. But how strongly does the assumption that cutting carbon is costly still hold?

Two recent ISR reports, commissioned by the We Mean Business coalition, examined the future prospects for three crucial low carbon technologies – solar PV, wind power and electric vehicles – by considering their recent progress in deployment and cost reduction, and the implications if these trends were to continue.

This data from IRENA shows how the cost per unit of electricity produced from solar PV, onshore wind and offshore wind, averaged over the lifetime of the plant, has been falling over recent years, and is now highly competitive with the range of equivalent costs from fossil fuel plants – in some cases cheaper than even the most efficient fossil fuel plants. 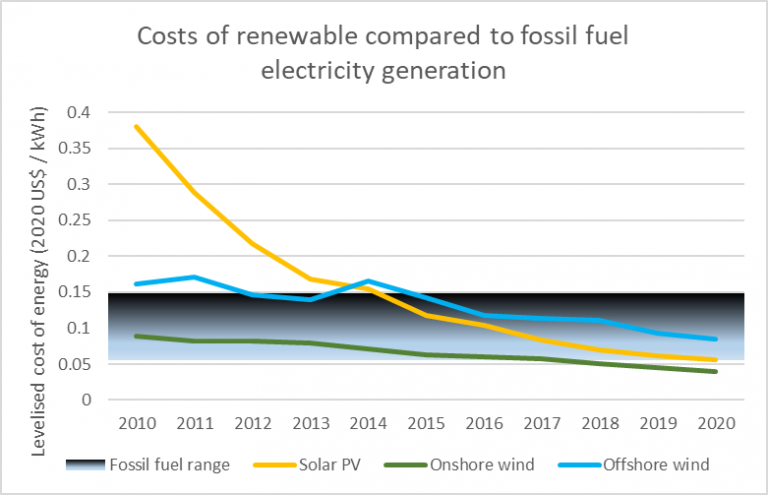 Figure 1: The global average ‘levelised cost of energy’ for electricity produced from solar PV, onshore wind and offshore wind, compared to the range of costs of fossil fuel-based electricity generation. Data from IRENA (2020)

Similarly, whilst electric vehicles still typically have a higher purchase cost than the equivalent petrol vehicle, because of their greater efficiency they have much lower running costs, meaning that the overall costs over the lifetime of the vehicle are in many cases lower.

Despite this they are still far from taking over on a global scale. Currently, the combined electricity production of solar PV and wind supplies about 10% of global electricity demand, and electric vehicles are about 1% of the global car fleet.

But in addition to considering the shares as they stand at the moment, it also relevant to consider the rate at which these technologies have been growing. Between 2010 and 2019, the amount of electricity produced from solar PV and wind increased at average rates of 41% and 17% per year respectively; and the share of electric vehicles within the total global car stock has been increasing over the last 5 years at average rates of 44% per year. The IEA projects that renewable sources of electricity will account for “95% of the increase in global power capacity through 2026.”

If these kinds of growth rates were to be maintained over the next few years, these technologies would fairly rapidly acquire dominant market shares, as illustrated in the figure below. It shows the possible future implications for the growth of each technology, on the basis of the continuation of annual growth rates similar to those of recent years. The projections start by adopting the annual average growth rates since 2010 for solar PV and wind, and since 2015 for electric cars. The growth rates used to extend these projections out to 2050 never exceed these recent historic averages – on the contrary, the growth rates are gradually reduced from their recent historic levels, as the market share of the technology increases. As the market share nears its full potential, the growth rate declines toward zero, causing growth to level off. This produces an “s-curve” shape, characteristic of many real historical technological transitions. 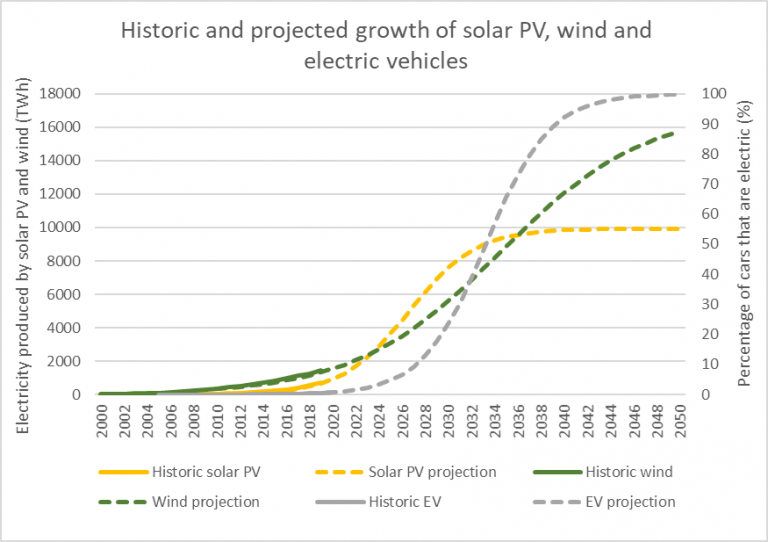 Figure 2: Recent historic growth of global electricity generation from solar PV and wind, and of electric vehicles as a share of total global cars, and future projections of each based on their recent historic growth rates, fitted within an s-curve diffusion shape, typical of technological transitions. Adapted from analysis presented in recent ISR reports for the We Mean Business coalition, on the electricity and transport sectors.

Of course these are purely illustrations – but they help to show the speed with which new technologies can acquire market share, if anything like the kind of growth rates recently observed for solar PV, wind and electric vehicles, can be maintained.

The increasing cost competitiveness of these technologies provides one strong reason to think that these powerful rates of growth could indeed be maintained. But cost reduction alone is not sufficient – there are a number of other conditions that will also be required to bring about the kind of transformational change illustrated by the above graphs.

The continuation of these rates of growth will depend on the availability of finance to both large and small actors in different regions of the world, at reasonable rates of interest; on coordinated and strategic planning of infrastructure both in the electricity and transport systems, which also takes into account the interactions between these systems; on a similarly integrated review of policy and regulatory frameworks that support the full integration of renewables in the electricity system, including by encouraging and rewarding load-shifting, and take account of the increasing synergies between the electrified transport system and renewables-led electricity system; and on both national and international measures to ensure that the supply chains supporting these technologies are sustainable and just, and that the benefits of green job creation, and the upfront costs of necessary infrastructure investments, are fairly shared.

This article has been written by Nick Hughes as part of our 'Directing innovation for sustainable development' research theme in celebration of 10 years of the UCL Institute for Sustainable Resources.