At the Queen Elizabeth Olympic Park, CASA is putting a human face on the Internet of Things. Words: Katie Puckett 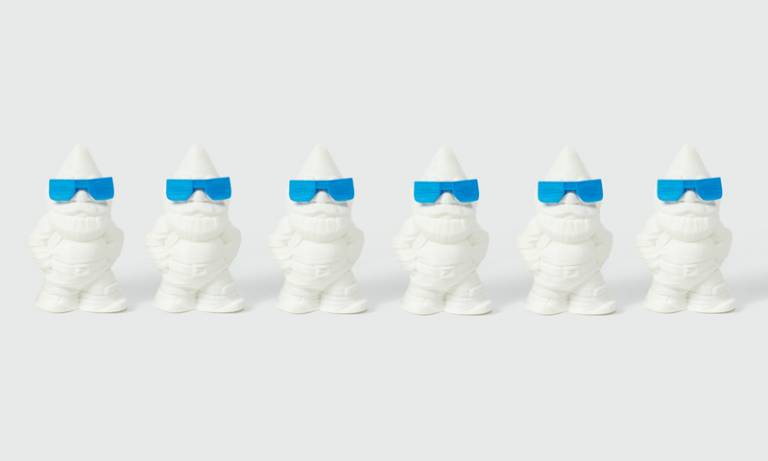 “The gnomes keep me up at night,” admits Professor Andrew Hudson-Smith, Director of the Bartlett’s Centre for Advanced Spatial Analysis (CASA). “There is a line between academic ideas, public-facing applications and the use of technology to understand place and space. Do academics do gnomes?” On the desk in front of him sits a 3D-printed gnome of the garden variety, unpainted and not yet fitted with the Bluetooth transmitter that will replace its feet. “Probably not,” he concludes.

CASA, however, does do gnomes. When it’s finished, this one and 29 clones will sit in solar-powered mushroom homes among the shrubbery of the Queen Elizabeth Olympic Park in east London. They will be the most visible elements of a vast technology infrastructure underpinning the cutting-edge ‘Smart Park’ project, on which UCL is collaborating with partners including Intel and Imperial College.

The London Legacy Development Corporation (LLDC) aims to create the city’s “smartest and most sustainable park”, with ubiquitous wifi, superfast broadband and a dense mesh of sensors monitoring everything from temperature and humidity, to the movement of crowds and even their emotions. Over the next decade, CASA will collect and analyse this data to understand and transform how people use the space and, looking further ahead, plan the smart urban districts of the future. So far, they have won four grants worth £13m, and Hudson-Smith leads a team of eight researchers working on associated projects, including three PhD students.

As well as crunching the data themselves, the CASA team are exploring ways to present it for policymakers and local communities, through technologies such as interactive dashboards and virtual and augmented reality. One of the first outputs, funded by the government’s Future Cities catapult programme, is a 3D model that displays data from across the park in real-time: “So as a bus travels around the park, it potters around our model,” says Hudson-Smith.

Flexible enough to integrate new buildings and data sources as they become available, the model will be used by LLDC for both day-to-day management and future planning. “For example, if we can see real-time crowd flows for football matches, we might be able to persuade people to go to different exits or take different public transport home,” explains Jim Wood, LLDC’s director of IT and information services.

“We could use that crowd-monitoring data to plan future events, and we can drop new buildings into the model when we go out for planning consultations.” Many of its potential uses have yet to be conceived, he adds. “It’s a bit like a data warehouse, where you’re not sure how the data relate to each other. Sometimes you don’t get those insights until you’ve got the data and you start playing around with it.” 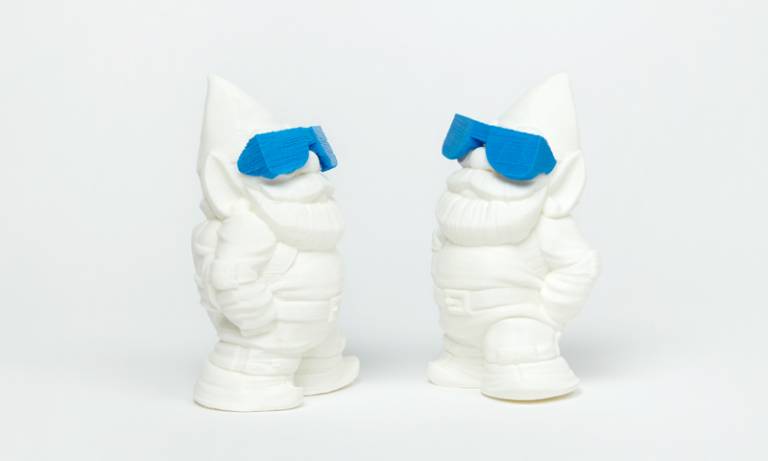 The Olympic Park is an ideal testbed for smart-city technologies partly because it contains such a variety of building types: as well as the green spaces, there is residential, commercial, sports and concert venues, places to eat and drink. Its other unique selling point is that it is a work in progress. “It provides a nice changing environment,” says Intel’s Dr Duncan Wilson, Director of ICRI Cities, one of its collaborative research institutes for R&D.

“We can explore how changes in the physical built environment influence the digital layers we’re creating. If you build a new building, how will that change the way the radio waves propagate around that field? And as more and more people go to the park on a daily basis, either through living or working there, or for events like a West Ham game – how do changes in the numbers of users interrupt the radio traffic?”

For technology providers, this real-world experience is crucial: “Lots of the component parts of these systems exist, but it’s still quite a young industry in terms of having end-to-end solutions that work,” says Wilson. “We don’t yet know what it takes to create a sustainable Internet of Things network.”

A key aspect of their research is in how self-powering devices can be designed to react to their environment. With billions of sensors deployed across the smart cities of the future, it won’t be viable to change their batteries or set up each one individually, Wilson points out. “The network itself needs to work out how it should run. If a device is on the east-facing side of a tree, it might start to learn that it has a good supply of solar energy in the morning but it’s going to run out at the end of the day. The devices will have an awareness of themselves as a community, and decide how often they should be sending measurements and ‘who’ should send them.”

But the physical side of the Internet of Things is only half the story. Just as we need to know how the equipment behaves, we also need to know how people will react to it. And while the full infrastructure of a smart city will take years to put in place, there is plenty of social data that we can gather now to find out how the design of a place affects people’s experiences of it.

A previous project saw CASA install a wifi prayer network in two churches. When congregants in one church posted a prayer, it appeared on the wall in both and an electronic candle lit up. It was about creating digital empathy, says Hudson-Smith, but it also revealed something else: “Someone cleared out the church one night and all of our equipment was stolen. Which is interesting academically because you realise that the Internet of Things is not secure.”

At the Smart Park, CASA has secured a grant from the EPSRC’s PETRAS hub to investigate cybersecurity, the Internet of Things and trust. “We’re assuming a few of these gnomes will go missing, but they’ll be tracked, so we’ll know where they go,” says Hudson-Smith. The tracking data will not be used to retrieve the gnomes, just to reveal what happens to the devices out in the wild. They will also turn some into “bad gnomes” to find out how easily people give up their personal data or how likely they are to take advantage of unexpected access to a secure network. “They might ask you for your password, or the gnome might tell you its password, and we’ll see what people do with that,” adds Hudson-Smith. 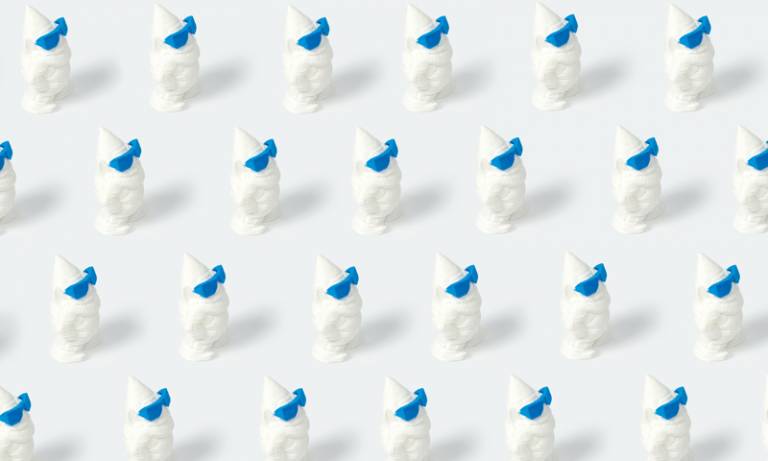 This is why academics do sometimes have to do gnomes. The Bluetooth beacons could have been installed in “ugly white boxes” but then people wouldn’t engage with them in the same way: “That’s why a lot of research and devices fail. They’re too techie and no one cares about them.” Hudson-Smith is a planner by background, but his lab is a mix of mathematicians, computer scientists, geographers, architects, psychologists. They are also working with Lancaster University’s Imagination lab and artists at Edinburgh University: “You need to get artists involved in your work to get that spark.”

The Bartlett’s work at the park is set to continue with the opening of a UCL campus there in 2019. “Research grants can often come to an end whereas the point of this is that it needs to be longer term,” says Hudson-Smith.

“Having a Smart Park lab based there allows us to carry on the research for the next 10 or so years with Masters courses attached. Hopefully, in 10 years’ time, there’ll be new post-docs writing their own grants for work at the park. My job is then done.”

Much of CASA’s work aims to take the Internet of Things (IoT) out of the realm of geekdom and bring it to life for the general public. An Engineering and Physical Sciences Research Council-funded project called Tales of Things used electronic tagging to give every object in an Oxfam shop a history and a voice. It includes a website where people can upload their memories as the objects change hands. CASA’s Andy Hudson-Smith calls it ìa mix of the Antiques Roadshow, Facebook and eBay. You can try it for yourself at: talesofthings.com. The follow-up is Tales of the Park, where trees, benches and the Bluetooth gnomes will share information with people as they walk past, and ask them about their experiences.

Sharon Richardson, who completed a Masters in Smart Cities and Urban Analytics at CASA, is now studying for a PhD, funded by EPSRC, exploring sentiment analysis in the park.

Q. How are you using sentiment analysis at the Smart Park?

I’m interested in whether we can use digital data sources to sense the vibe of a space, in the same way that a human can walk in and instantly have a gut feeling. With the proliferation of mobile technologies and embedded devices, I’m curious as to whether we can use all the digital traces we’re emitting to influence behaviour and spatial choices.

Q. What types of data can you use to do that?

Anything that falls under the remit of the Internet of Things. Sometimes it’s simply the awareness of presence or movement. Then there’s the communications that we share – if people are on social media while they’re in the park, we can do sentiment analysis on the words they use. People are quite vocal about football, so maybe we can sense the outcome of a West Ham game from the commentary during the match. Are they winning? Are they losing? Does that evoke a different sentiment that might affect how people behave in the park?

Q. How will mobile technologies change our relationship with the built environment?

My theory is that how we behave is tied to the situation we find ourselves in and the identity we adopt while we’re there. With all the technology we’re embedding into the built environment, we could start to create a level of artificial intuition, so rather than just collecting data about what we do, we use it as a feedback loop to help us. Human intuition normally serves us very well, but sometimes it completely blindsides us. There are examples from disasters where people didn’t know there was an emergency exit because they just followed the crowd. That’s when technology could hopefully say, ‘Woah, you’re going the wrong way.’