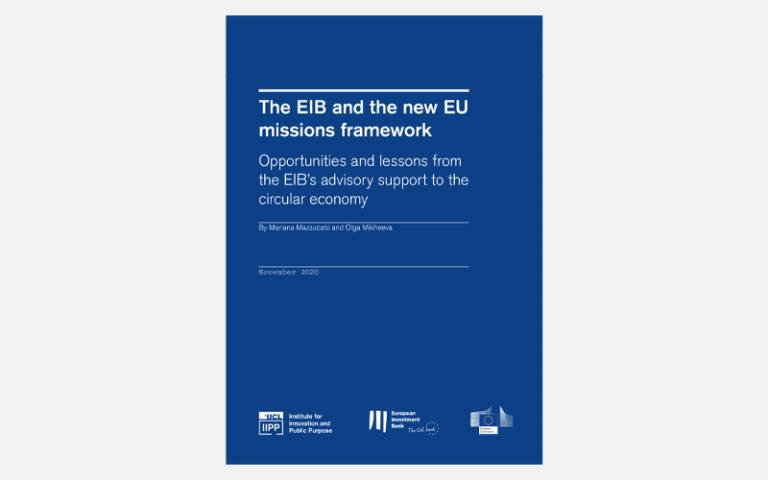 The IIPP policy report titled ‘The EIB and the new EU missions framework: Opportunities and lessons from the EIB’s advisory support to the circular economy’ examines various support measures provided by the EIB to circular projects with a particular attention to financial advisory services.

Recently the European Commission adopted a mission-oriented approach to innovation policy for the Horizon Europe programme 2021-2027. Circular Economy, as a megatrend, runs across all five missions areas and was selected as the focus of the report’s case study due to its role in providing the ‘direction’ to growth in Europe.

The report highlights that a higher risk-taking and financing of circular innovation requires maintaining and continuously developing in-house technical and analytical competences (in the form of technical appraisal and advisory services) inside the EIB. Drawing on the circular case study, the report also puts forth the three key recommendations regarding the EIB’s role in implementing the Missions.

On 19 November 2020 the report was launched by Professor Mazzucato at the public high-level seminar co-organised by the EIB, the European Commission and the German Institute for Social Research (Deutsches Institut für Wirtschaftsforschung, DIW). This high-level seminar titled ‘Investing in Europe’s green and digital future’ was dedicated to examining the effects of European Fund for Strategic Investments (EFSI) and lessons that can feed into its successor, the InvestEU programme.

Mariana Mazzucato delivered a keynote speech and reflected about the necessity to co-design and shape the green markets, to more actively employ green conditionalities of post-COVID economic recovery plans, and about the role public development banks, such as the EIB, can play in helping re-directing fianancial capital to support green innovation. As Professor Mazzucato noted in her keynote: ‘The real question: what kind of finance and innovation we need for Europe to succeed in missions? […] It’s important to strengthen long-term orientation of missions, to maintain financial and more importantly, analytical, market intelleignce, competences withint the EIB.’ She added that this is crucial especially today – when we need a post-COVID recovery now but also as a region we decided to become more mission-oriented.

In his foreword to the report, the EIB’s President Dr Werner Hoyer emphasised that the EIB is well-positioned to capitalise on its technical expertise and advisory work while implementing the missions. Similarly, the European Commissioner Mariya Gabriel referred to the report as the guidance in terms of ‘how to create solid and reliable mission investment strategies’ and that it can service as the basis for the EC-EIB ‘cooperation to make missions a success’.