Erik S. Reinert, one of the most prolific and important development economists and historians of economic policy today, joins the UCL Institute for Innovation and Public Purpose (IIPP) as an honorary professor. 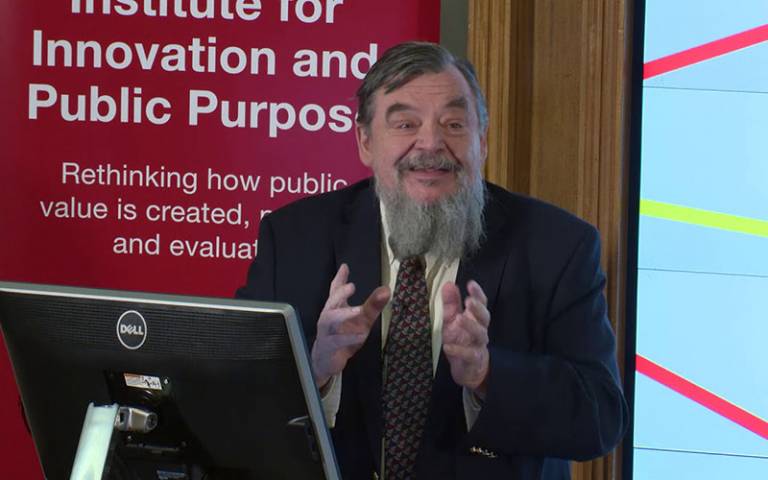 Erik S. Reinert, Professor of Technology Governance and Development Strategies at Tallinn University of Technology, Estonia, focuses his research and teaching on the theory and history of uneven development, with particular attention to the history of economic policy as an under-researched area. His seminal book How Rich Countries got Rich and why Poor Countries Stay Poor (2007), shows how rich countries developed through a combination of government intervention, protectionism, and strategic investment—rather than through free trade. The book has been translated into 20 languages, and in 2016 The World  Economics Association shortlisted this book for the election of the ten most important economics books of the last 100 years.

Erik’s work on history of economic thought includes publishing on the economic bestsellers before 1850, on the nearly 100 economics books that were published in more than 10 editions by that date. He is the founder of The Other Canon Foundation, a vital source for the history of economic policy and thinking.

Erik is also engaged in the economics of aboriginal peoples. He has published on the economics of reindeer herding (also as this is affected by climate change), has served as adjunct professor at Sámi University of Applied Sciences and worked with the International Centre for Reindeer Herding, both in Kautokeino, Norway. He has also served as an advisor to the Sámi herders in their annual negotiations with the Norwegian government.

Erik holds a BA from Hochschule St. Gallen, Switzerland, an MBA from Harvard University, and a Ph.D. in economics from Cornell University. For almost two decades he ran a manufacturing company which by 1990 produced in three European countries.

"We are very happy to welcome Erik to the IIPP family! He is one of the greats of heterodox economics, his depth of knowledge about the history of economic policy and thinking is unparalleled in the world. Erik’s contribution to contemporary development economics has been enormous and his focus on industrial policy issues couldn’t be more relevant today."

"In days when traditional labels like left and right are gradually losing their relevance in a sea of abstractions, I am extremely happy to join Mariana Mazzucato and her team at IIPP where relevance appears to be the key criterion for policy-making. This marks, in my perspective, a return to the historical schools of economics which had the creation of the welfare state as their perhaps biggest achievement."