New economic thinking for a green transition in the Basque Country

IIPP is working with the Basque Country to deliver a more equitable and greener approach to capitalism. 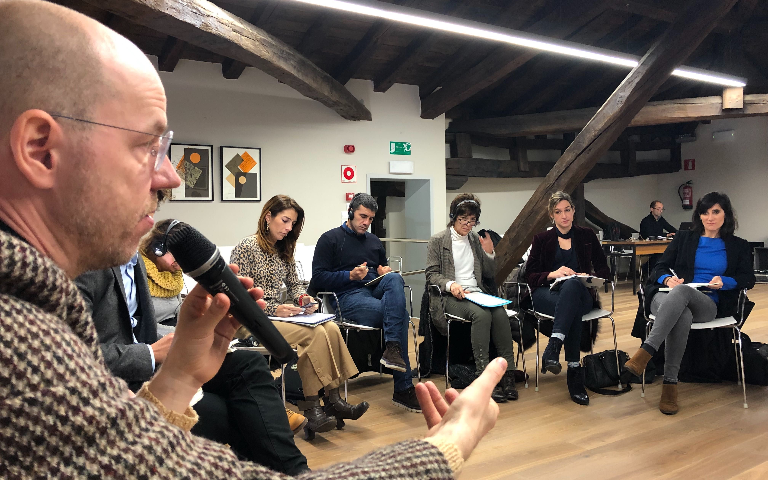 On November 22, IIPP Deputy Director Rainer Kattel and IIPP Head of Green Economy and Sustainable Growth Martha McPherson travelled to the Debagoiena Valley, in Mondragon, Spain, to work with our project partners on a new mission-oriented agenda for the valley.

The IIPP team spent two days working closely with partners in the region, communicating through Basque, Spanish and English.

The Basque Country, which is known around the world for its socially innovative approach to organising work – through co-operatives (many of which are led by the Mondragon Corporation) is thinking about its role in a greener future.

On the first day, Professor Kattel presented our work at IIPP to project partners, focusing on what a new mission-oriented agenda would look like for the valley.

On the second day, the IIPP team met with regional governments in the Guipuzcoa and Biscay regions to discuss how IIPP can help shape their plans across areas, such as: social innovation, public sector development, and Sustainable Development Goal-driven policy plans.

This latest trip was the continuation of the work that IIPP has done on the Debagoiena 2030 project - which brings together co-operatives, citizens and municipalities in the Basque Country’s industrialised Debagoiena valley, to plan for a social, industrial, and green-focused transformation of the region.

As part of this project, IIPP has been working closely with our partners at EIT Climate-KIC, Europe’s largest climate innovation initiative, to help draw together a consortium of change for the region, and to embed our work of rethinking value, transforming institutions, and market co-creating, at the heart of a new vision for the Basque Country.

The whole trip was organised in partnership with Agirre Lehendakaria Center for Social and Political Studies, and in particular by Senior Fellow Gorka Espiau. The centre is focused on the how self-governance and state investment in the Basque Country has led to socioeconomic transformation of the region – which has historically resulted in excellent healthcare, education for its residents, along with high incomes.

Speaking about the trip, Professor Kattel said, “The Basque country is in many ways at the forefront of reinventing capitalism. It has a great tradition of cooperative-owned firms, and a policymaking tradition focused on co-creation. Such socially embedded capacities and capabilities should set the region up for successfully transitioning into digital capitalism, where data is owned by citizens and business models add (rather than subtract) public value.”