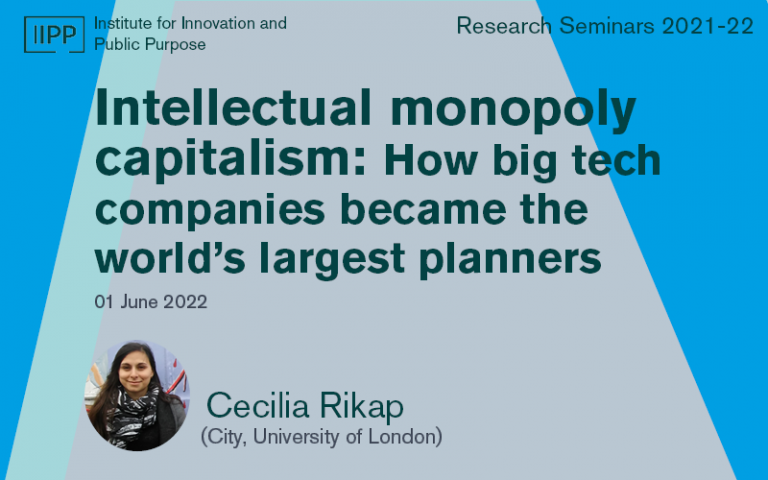 Join us to hear Cecilia Rikap talk about her research on 'Intellectual monopoly capitalism: How big tech companies became the world's largest planners'. This talk will be chaired by IIPP’s Antonio Andreoni with a discussion from Fausto Gernone, IIPP PhD student. Followed by questions from the audience.

Contemporary leading corporations, from big pharma and big tech to less-known cases such as BlackRock and State Grid Corporation of China, are intellectual monopolies that base their power on the systematic concentration (and predation) of knowledge turned into intangible assets. By monopolising access to society’s knowledge, these companies’ capacity to plan portions of capitalism exceeds their legally owned assets. This seminar will elaborate on the emergence of intellectual monopolies, focusing on the specificities of big tech companies as data-driven intellectual monopolies planning every sphere of capitalism.

Tech giants centralise big data, have exclusive access to the most advanced machine learning algorithms and control infrastructure to transport, store and process data. Data are harvested from all around the world and their secretly kept algorithms rely on knowledge produced by other organisations but that is appropriated and monetised by tech giants. In other words, intangibles are produced globally but data-driven intellectual rents are mainly garnered by tech giants. Overall, the digital economy is standing on data and knowledge extractivism. Controlling the digital technology package (data, algorithms and infrastructure) not only limits others from using and, therefore, from learning from data insights. Machine learning algorithms learn (self-improve) as they process data, thus continuously augmenting data management proficiency. Algorithmic or digital learning can be conceived as a new method of invention that speeds up the innovation process by using algorithms to locate the most promising new combinations of existing elements of knowledge. The resulting digital intelligence gives direction to sales, acquisitions and innovation. Since this general-purpose method of invention is concentrated in a few hands, the potential for further innovating is increasingly monopolised. Furthermore, by relying on their expanding data-driven intellectual monopolies, tech giants’ capacity to plan every aspect of human life (production, markets and our personal lives) reaches previous unconceivable levels.

The emergence of (data-driven) intellectual monopolies has implications at every level within capitalism, including global capital accumulation, effects on labour and the peripheries. This seminar will end by briefly addressing these implications and will elaborate on alternative futures.

Lecturer in International Political Economy and Tenure researcher at City, University of London and CONICET 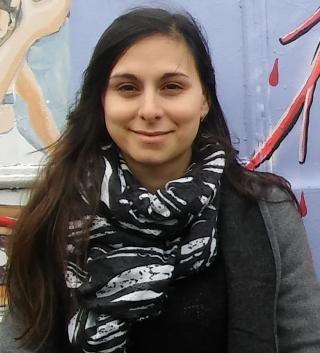 Cecilia Rikap holds a PhD in economics from the Universidad de Buenos Aires. She is a permanent Lecturer in IPE at City, University of London and she is a tenure researcher at the CONICET, Argentina’s national research council. She is associate researcher at the Centre de Population et Développement (CEPED) of the IRD/Université de Paris and at the COSTECH lab, Université de Technologie de Compiègne. She is also co-director of the research center “Centro de Estudios Económicos del Desarrollo” of the Universidad Nacional de San Martín. She studies the rising concentration of intangible assets focusing on the emergence of intellectual monopolies, among others from tech and pharma industries, the distribution of intellectual (including data) rents, resulting geopolitical tensions and the effects of intellectual monopoly capitalism on the knowledge commons and development. Her research also deals with understanding intellectual monopolies as corporate planners replacing state functions. More about Cecilia Rikap