Ten Years On: The Financial Crisis and the State of Modern Capitalism 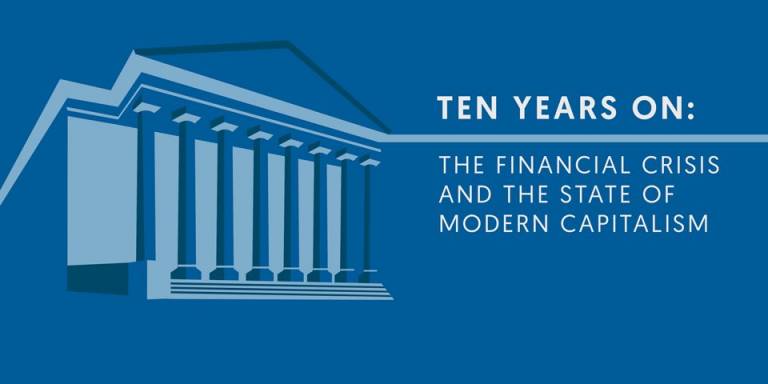 It’s been ten years since the crash that shook the foundations of modern capitalism. In the run-up to the global financial crisis of 2008, politicians, economists and financial institutions alike boasted about the ingenuity of their deregulated financial system that had generated unprecedented wealth for decades. But then it all came tumbling down. First Lehman Brothers went bust. Then Freddie Mac, Fannie Mae, Merrill Lynch, RBS and AIG all came within a hair’s breadth of bankruptcy, nearly dragging the entire global economy into the abyss. World leaders were forced to pump trillions of dollars into the banking system in an attempt to pull back from the brink and prevent a second Great Depression.

So where are we today? Many predicted a decade of home repossessions, business closures and mass unemployment, but this never materialised. Instead, job growth continues to hit record highs, while the stock market is booming on both sides of the Atlantic. But although we may have been spared a second Great Depression, post-crisis productivity has flatlined and the last decade has seen Britain’s worst pay squeeze since the nineteenth century. And according to some, the seeds of today’s political upheavals, from Brexit to Trump to the Corbyn surge, were sown during the 2008 crash, which irreparably damaged public trust in the establishment and its institutions.

To look back at this critical moment for the global economy and examine its repercussions today, Intelligence Squared are bringing together a panel of the country’s top economic experts: Mervyn King, Governor of the Bank of England during the crash and its aftermath, acclaimed UCL Economics Professor Mariana Mazzucato who recently advised Jeremy Corbyn on innovation and industrial strategy, and Torsten Bell, Director of the Resolution Foundation, a think tank focusing on improving the living standards of those on low to middle incomes. Chairing the discussion will be the BBC’s economics editor Kamal Ahmed.

Has enough been done to regulate the banks and protect our economy from future shocks? Is it only a matter of time before we face a new, even worse crash? And did we let the crisis go to waste by failing to rethink the system and rebalance the economy away from financial services? Join the debate on February 5th, hear the arguments and make up your mind.