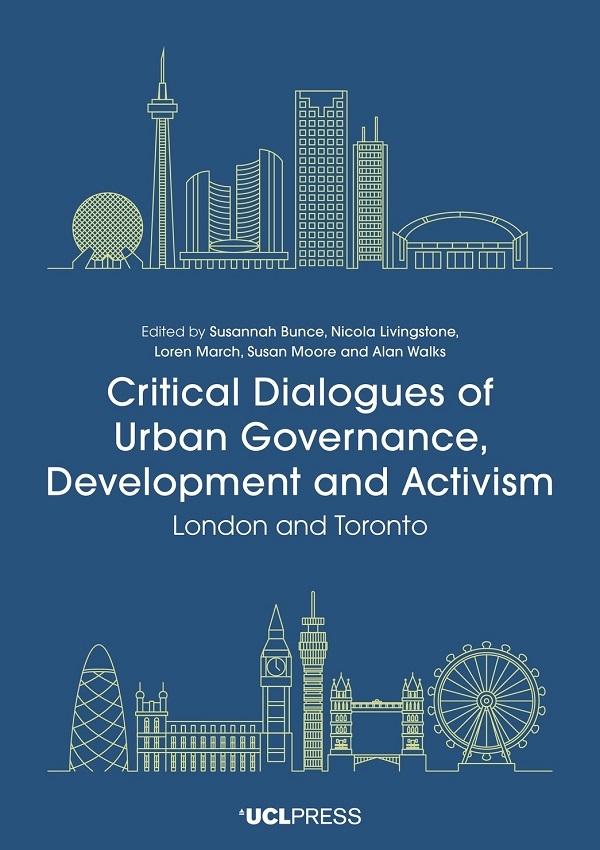 Cities have been sites of some of the most visible manifestations of the evolution of processes of globilzation and population expansion, and global cities are at the cutting edge of such changes. 'Critical Dialogues of Urban Governance, Development and Activism' examines changes in governance, property develipment, urban politics and community acitvisim, in two key global citiesL London and Toronto.

The analysis is inherently comparative, but not in the traditional sense – the volume does not seek to deliver a like-for-like comparison. Instead, taking these two cities as empirical cases, the chapters engage in constructive dialogues about the contested and variegated built forms, formal and informal governmental mechanisms and practices, and policy and community-based responses to contemporary urban concerns.

The authors position a critical dialogue on three central issues in contemporary urban studies: governance, real estate and housing, and community activism and engagement. Their less traditional approach to comparative framing seeks to understand London and Toronto from a nuanced perspective, promoting critical reflection on the experiences and evaluative critiques of each urban context, providing insight into each city’s urban trajectory and engaging critically with wider phenomena and influences on the urban governance challenges beyond these two cities.

The publication features contributions from a number of members of staff and past students from the Bartlett School of Planning:

Part I: Perspectives on governance

2. The elusive, inclusive city: Toronto at a crossroads

3. Regulating property conditions in the private rented sector: The complex geography of property licencing in London

5. The governance of urban public spaces in London: In the public interest or in the interest of local stakeholders?

6. London, its infrastructure and the logics of growth

7. Governing urbanisation in the global city: A commentary

10. Trends and Issues in the (unaffordable) London housing market

12. Planning for densification and housing in London: Urban design and real estate agendas in practice

14. Real estate and housing: A commentary. Dynamics of a housing crisis – the politics and planning of housing in London and Toronto

16. Pragmatic fix or a farewell to welfare? Making sense of and contesting the financialisation of public land and council housing in London

18. Time to be an activist: Recent successes in housing activism in London

20. Community, activism and engagement: A commentary

Conclusion: Critical dialogues on urban governance, development and activism in London and Toronto