Politics matters and constitutes an intrinsic dimension of the urban. Changes in the city are constantly linked to the interaction of several actors and stakeholders, whose different interests and levels of power, influence agreements to define specific forms of development. Communities, usually expressed through social movements or residents’ campaigns also play a key role, either to support or contest urban initiatives. This research examined twenty years of attempts to regenerate the port-city of Valparaiso in Chile. In doing so it assessed how the political articulation of public agendas, economic interests and social struggles linked to urban changes, underpinned processes and outcomes of urban regeneration.

To approach this case, I linked concepts taken from human geography and political sciences, specifically bridging theories of scale production and the urban regime approach. Although these links have been reviewed before, and more recently addressed in cities of the Global South, the research argues for the review of these theoretical approaches when used in combination as a framework for analysis in a southern city such as Valparaiso. The research highlights the importance of coalition-building among different actors configuring urban governance, insofar it is understood from a multiscalar perspective, in which decision-making is produced far beyond the urban scale.

The research found that the strategies produced in Valparaiso sought to trigger economic diversification away from the port, which despite its constraints and historic reduction of staff, remains as a relevant influence. The development of tourism based on the city’s rich heritage and the presence of important universities linked to new industrial development were considered among key initiatives to exploit and overcome a long-term process of deprivation. Nevertheless, these strategies based on competitiveness, instead of addressing the city’s historic poor record for unemployment and poverty, have produced spatial fragmentation and exclusion, and the emergence of social movements opposed to several initiatives and projects led by the state. The research shows links between a process of city regeneration mostly linked to the tourism agenda, led by elites and targeting small profitable areas of the city’s UNESCO World Heritage Site. In parallel, the port authority developed its own masterplan focused on the activity expansion, along the construction of a controversial waterfront linked to a shopping centre. The exchange and interactions of actors between urban and port agendas produced several coalitions built in order to pursue specific agendas and investments, sometimes in contradiction, configuring an intertwined and entangled scenario of governance. In Valparaiso, coalitions were produced at different spatial scales, depending on the nature of the projects and the characteristics of the strategies used.

Through the study of a city like Valparaiso it was possible to unveil the constraints between ‘imported’ experiences of urban regeneration mostly taken from the Global North and the practices, both formal and informal, carried out in a Latin-American city. One attempt of this research was to show the relevance of politics and, through the idea of multiscalar coalitions, unveil the intricacies and asymmetries related to decision-making processes, perhaps not so clear during policymaking but evident during their implementation. 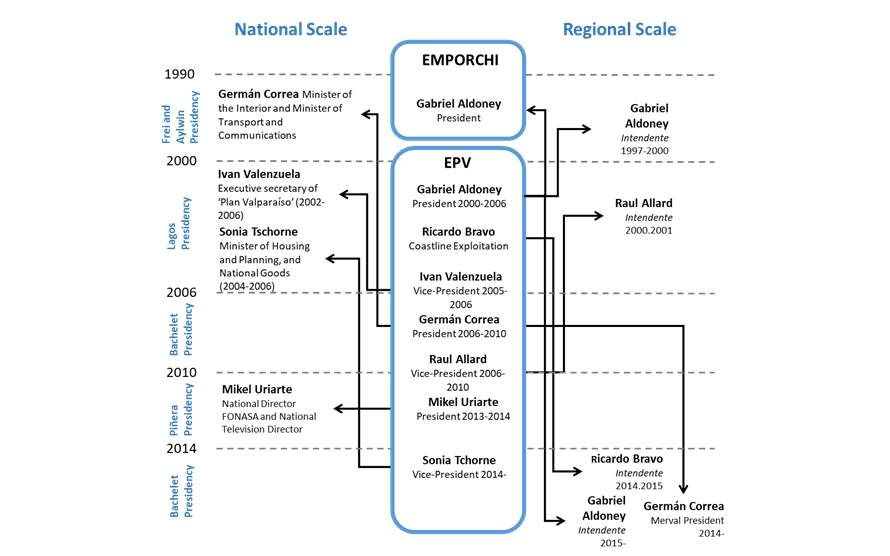 Finally, this thesis critiques the concept of urban regeneration itself, particularly its dominant understanding as a tool for urban economic growth under neoliberalism, in which the impact on residents, especially the poor, appears as a mere externality. In this regard, the evidence presented through an in-depth case study approach ratified the constraints and limited impacts of the strategies of urban regeneration implemented in Valparaiso but also helped to provide room for the construction of alternatives, aimed at a more just and inclusive process of urban change. This is illustrated through emergent social dynamics outside the market realm, particularly in the hills of Valparaiso, having the potential for bottom-up improvement without necessarily forcing displacement of residents. It also opens room for further research linked to the port city and its urban politics from a more emancipatory perspective.

Rodrigo Caimanque completed his doctorate entitled ‘The politics of urban regeneration: the construction of uneven agendas through multi-scalar coalitions in Valparaiso’ at the Bartlett Development Planning Unit in March 2019.