Creating space for conversations on mental health can help researchers through the PhD journey. 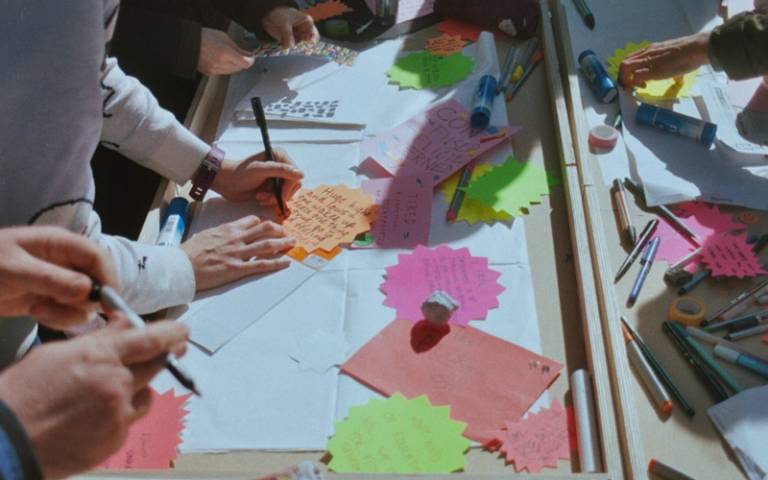 There was a moment before my PhD began that a friend asked how my mental health was. I was slightly taken aback but it came with a kind caution: to be mindful of the impact that the research process can have on one’s mental health. This is particularly the case if, like me, you’re someone who enters it with previous or ongoing issues. It is now a question I put to friends about to embark on the experience themselves.

To be able to study in higher education is absolutely a privilege. However, isolation, along with imposter syndrome, competitiveness, unclear measures of progress and success, a lack of structure, and ‘toxic’ institutional cultures of overwork and ableism, are recognised as factors that contribute to mental health difficulties. Several years later, talking about my own mental health has become indistinguishable from the PhD - as a way of bolstering my own resilience as well as connecting with others in supporting each other.

RESEARCH/INTERRUPTED was born from honest and vulnerable conversations with friends who shared similar difficulties with mental health, both emerging from or exacerbated by the PhD process. The name developed from how having poor or spiralling mental health ‘interrupts’ a research flow. Our conversations took place in bars and cafés, over messages or online. In January 2018, I teamed up with Jade French – the other half of RESEARCH/INTERRUPTED, and a PhD student at Queen Mary University – and we discussed what it would mean to bring these conversations back into our institutions, into the very spaces that we navigated our mental health within, in the form of a series of workshops.

There is a clumsiness with using the term mental health, without a full understanding of what it encompasses. The World Health Organisation defines mental health as “as a state of well-being in which every individual realizes his or her own potential, can cope with the normal stresses of life, can work productively and fruitfully, and is able to make a contribution to her or his community”. It is sometimes tacked on to the self-care movement, and includes a range of different experiences of anxiety, depression, trauma, grief, as well as schizophrenia or bi-polar disorder. Though not an exhaustive list, what is clear is that mental health comes to stand for a vast range of different experiences. The workshops wanted to begin creating a space where people could connect across these range of issues within the very specific setting of the PhD process.

It was through a successful application to the Bartlett Doctoral Initiative Fund that we were able to begin exploring what a conversation like this would look like, providing the opportunity to host three workshops from March – May 2018. These workshops used creative ways in which participants could discuss their relationship with both their research and their mental health. This created a mutual forum for sharing coping tactics and provided a supportive community with other researchers. With the support of the Fund, the workshops allowed for needed conversations around mental health at a postgraduate level, a section of the university that often feels unsupported.

Participants were wide ranging, in experiences, age and disciplines. Not only from the Bartlett but across several UCL departments, as well as other universities. For us, this felt indicative of the need for support across the board as researchers came from UCL, Imperial, Kings, and Queen Mary, and undertaking research in the sciences, economics, or arts and humanities. Each session was intimate but well attended, with on average with 8 – 10 participants. A high proportion of those were from the LGBTQI+ community, which suggests we could be helping address another area of unmet need.

In each workshop we set a theme, for example around the writing process and isolation, or exploring tactics to support ourselves and each other. While the workshops were mostly conversation based, activities were used to stimulate conversations. For example, in one session we used readings to structure the workshop and drew prompts for these, such as Katie Levecque et al’s paper Work organization and mental health problems in PhD students (May 2017). In another session, a mural was created with participants adding notes of different tools they use to bolster their mental health, and each asked to pick one they didn’t know to take home with them to try.

Each session opened with a ‘check in’, where participants were asked to share what brought them to the session, what they may particularly be dealing with at the moment, as well as their preferred pronouns. As the sessions were participatory, these introductions were also an opportunity to get a sense of what people particularly needed in the moment. In closing, we did a similar ‘check out’, where participants could share what struck them during the session, what they were taking away and any feedback for us to better for next time. We encouraged participants not to leave if they didn’t feel ready and needed further support.

While each workshop was rich in conversation and sharing, both Jade and I realised that we were just scratching the surface. Jade and I are not mental health professionals – a position we were open about from the outset of each workshop – but we are PhD students with struggles of our own and are very much on the same journey as those who attend the workshops. In this way, RESEARCH/INTERRUPTED became a co-created supportive space. During those three months, the workshops created an opportunity to connect and support, and as a result left a legacy of community that continues to connect online and in real life more informally. Our most encouraging feedback is that many would come back again and again. At the end of the last session a zine was created as a take away for participants during the three months. This zine is accessible here.

Claire Tunnacliffe is a part time PhD student at the Bartlett School of Architecture at UCL, researching LGBTQI+ activism and interventions in the built environment as forms of queer practices of place making. The work attempts to situate concepts of placemaking as a radical tool for grassroots, queer activism, focusing on notions of community, place and identity.

Alongside her studies, Claire is a researcher at Social Life, an independent organisation that specialises in research and community projects exploring how people are affected by changes in the built environment and the relationship between people and places. Additionally, over the last 6 years she has run several projects which explore the relationship between mental health, addiction, and sexuality within urban spaces.