Architects Hawkins\Brown, designers of UCL at Here East, were hailed by judges at the Architects' Journal as 'the future of architecture’. UCL's Provost was shown how its many spaces are being used. 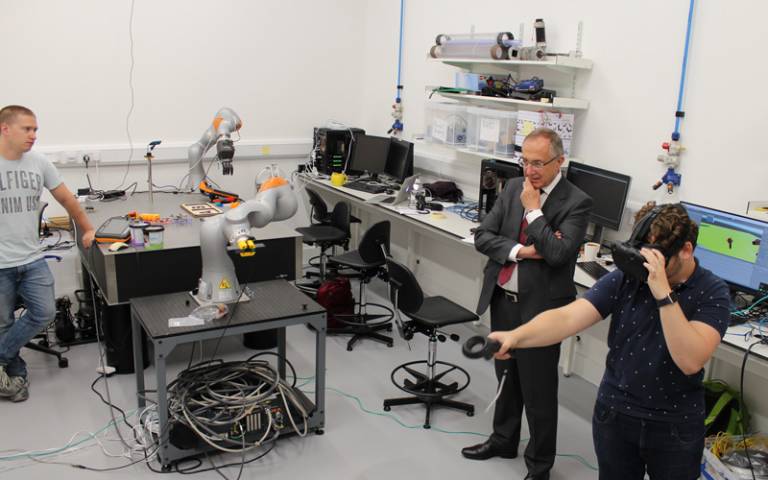 On the day we welcomed the University's President and Provost, Professor Michael Arthur, to see some of the cutting-edge new facilities in use by UCL at Here East in Stratford, East London, The Architects' Journal announced that Hawkins\Brown had won the prestigious annual award for their retrofit of the former Olympic International Broadcast Centre.

Hawkins\Brown fought off stiff competition from other high-profile practices and projects around the world to scoop the top prize at the AJ100 ceremony, which took place at The Tower of London on Wednesday 13 June. Other contenders included Zaha Hadid Architects, Foster + Partners and Feilden Clegg Bradley Studios.

The panel of 13 judges – comprised of academics, critics, practising architects and other industry professionals – praised Here East as 'fresh and visionary' and 'a highly intelligent reuse and reinvention of an existing building'.

Guided by Professor Alan Penn, Dean of The Bartlett, and Professor Nigel Titchener-Hooker, Executive Dean of the Faculty of Engineering Sciences, President and Provost Michael Arthur was shown some of the world-class equipment now in use at Here East for testing, prototyping, 3D-modelling and other advanced research activites. Facilities visited on the tour included:

As work continues to bring even more research and testing facilties into operation at Here East, we look forward to welcoming increasing numbers of students in the future. Meanwhile, plans for the huge new UCL East campus, also on the Queen Elizabeth Olympic Park, are well underway, with the first phase expected to open in 2021.

“The Here East facilities are all about challenging boundaries – between disciplines, faculties and departments, and practices and pedagogies. We have brought together parts of UCL that research the way that technologies are changing what people can do.We are looking at the human senses and capabilities as these are modified by technology and the environment: from light and sound to the smell of heritage; from interactive structures and tele-robotics to performative materials; and from the value of design and placemaking to sustainable communities. Here East is a 21st-century alchemist's crucible.

Find out more about UCL at Here East 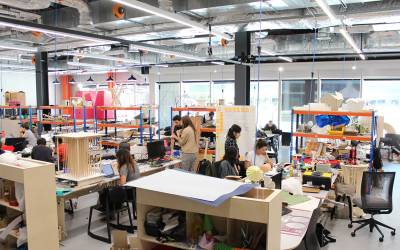