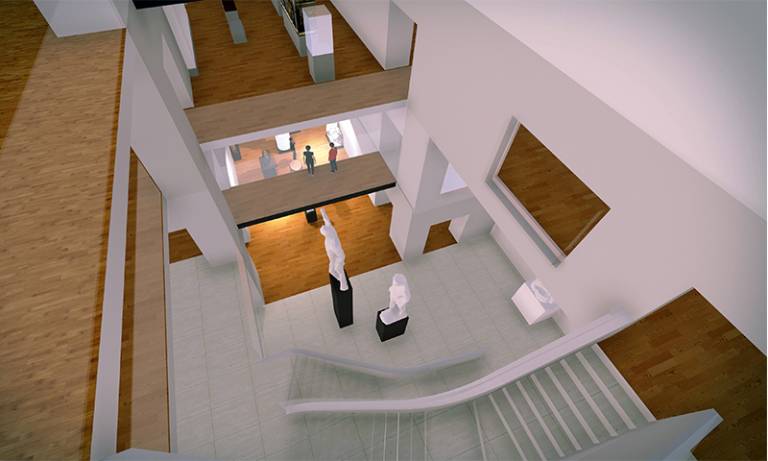 The fascinating spatial secrets of museums were revealed by Dr Athina Lazaridou when she presented her research on museums at the Bartlett School of Architecture on Monday 27 November. The lecture was presented for Dr Sophia Psarra’s module, Architectural Phenomena, followed by students of the MSc Space Syntax: Architecture and Cities. Engaging and well-structured, the lecture explored how spatial design informs human spatial exploration, and the degree to which this may be captured by virtual reality (VR) technology. The emphasis was on understanding the way users interact with the three-dimensional properties of museum spaces and how this ties into a global spatial programme.

In her lecture, Dr Lazaridou analysed the layout of three European museums which involved central atria with multilevel views; a factor which, according to her, promoted both architectural expression and spatial exploration. The museums studied were: the Ashmolean Museum of Art and Archaeology; the Museum of Scotland; and the Acropolis Museum. One of the aims of the research was to better understand how multilevel views – or ‘three-dimensionality’ – can be incorporated into a rigorous programme of spatial analysis such as for instance the space syntax methodology.

In exploring the spatial logics of her case studies, Dr Lazaridou deployed a novel methodological approach which combined VR and existing forms of space syntax analysis with real-time observations of people’s movements and simulation models. This approach enabled her to develop a finely calibrated understanding of spatial and navigational behaviour, thereby enriching existing space syntax methodology (which is two-dimensional) at the same time as contributing to the development of a better understanding of the architecture of museums. 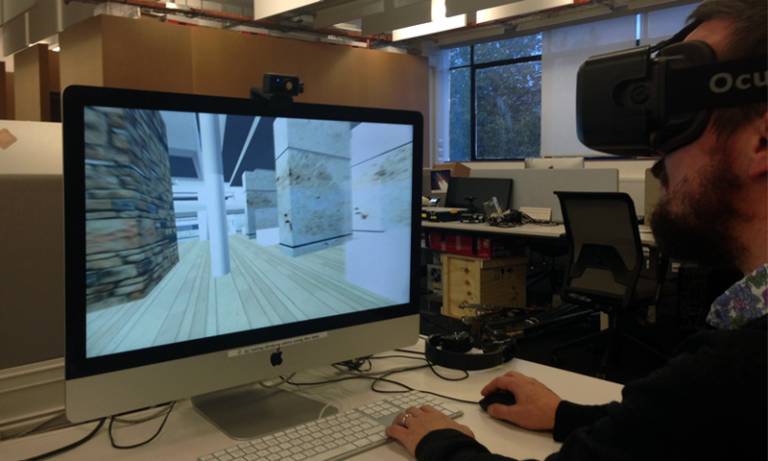 The lecture discussed similarities in the museums as well as their differences in terms of spatial organisation and movement of people. The findings were later compared with alternative designs of the Ashmolean Museum which had been generated using VR technology. Dr Lazaridou showed, convincingly, how slight virtual alterations in the three-dimensional properties of the Ashmolean Museum created variation in how people navigated, paused, and engaged with the building and collections. She also showed that significant similarities existed between real and virtual movement in multi-level cultural environments of this sort. Both findings added valuable new insights to the existing understanding of spatial exploration developed, for instance, by Daniel Montello, Sophia Psarra, John Peponis and Ruth Conroy Dalton.

Dr Lazaridou’s research indicates that atria have a capacity for informing spatial navigation in addition to being devices for architectural expression. This is significant in itself and will inform the disciplines of architectural research and spatial navigation going forward. The larger significance of her study arguably lies in its capacity to inform the theory and practice of museum design. Further down the line, it would be interesting to see if a ‘politics of the atrium’ could be added to the existing literature on the museum as a politico-discursive space (as developed by Tony Bennett with inspiration from Michel Foucault). This would follow nicely onto the existing research and is something to be considered by the researcher in the future.

Dr Athina Lazaridou completed her doctorate ‘Three-dimensional spatial navigation in real and virtual museums’ in the field of Architectural Space and Computation in April 2017.

Dr Frederik Weissenborn completed his doctorate in the field of Architecture in February 2017.