Heritage Smells! - On the value of gaseous emissions from heritage objects in non-destructive diagnostics

This innovative project (2010-2013) looked at the diagnostic value of the smell of heritage objects. We are all familiar with the smell of old books, but it has only recently been shown that the compounds emitted by paper provide clues about its composition and condition.

Using appropriate portable tools, which have recently become available, it should in principle be possible to "sniff" objects in non-laboratory conditions and thus provide valuable information to the end-users.

The increased interest in volatiles emitted by heritage objects (i.e. their smell) also comes from the fact that they constitute indoor-generated pollution. This is known to affect materials and objects in close (or not so close) contact but needs to be understood better. Also, some objects, particularly ethnographic objects, may have been treated with pesticides and their safest identification could be by instrumental sniffing. There are a number of applications for this approach and the Heritage Smells! project will lead the way towards introduction of small portable sniffing devices into conservation and management practice.

UCL ISH are particularly involved in research on book and plastic material identification and condition assessment based on non-destructive determination of volatiles emitted by the objects. To do this, we use gas chromatography and mass spectrometry in the laboratory, and a portable mass spectrometric tool to be used in situ, in libraries, museums, archives and galleries. The data needed to be instantly available, and development of appropriate data processing tools was part of the task.

Main image: Emissions from heritage objects are of high interest due to their potential diagnostic value - they could reveal the identity but also the state of degradation of heritage objects. For their analysis, gas chromatography coupled to mass spectrometry is a key tool (the photo is symbolic).

The large collaborative project was funded by the UK AHRC/EPSRC Science & Heritage Programme.

The Heritage Intelligence System works on the basis of numerous wireless nodes communicating with each other and each carrying several sensors, as required. The number of possible configurations is unlimited. 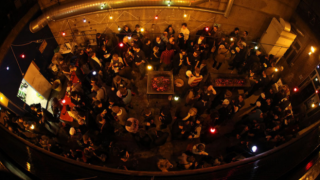