Viability of laser cleaning of papyrus: Conservation and scientific assessment 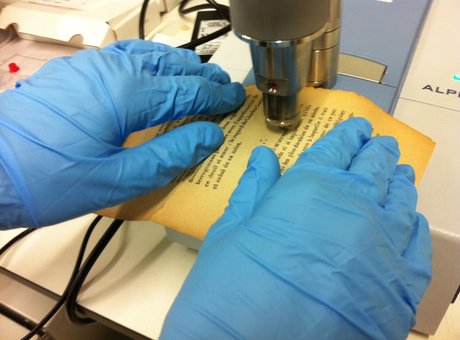 There has been a growing interest in laser cleaning applications for a variety of organic materials such as paper, parchment, textiles, and leather during the last decade. However, archaeological organic materials, notably papyrus, have rarely been investigated. This contribution examines whether removal of burial encrustation can be justified in view of its short-term and long-term effects on the substrate. To examine this, tests using mock objects have been performed. Using artificially soiled and archaeological papyrus samples, optimization of laser cleaning parameters using a picosecond laser (1064 nm, various operating conditions) was attempted. Optimization was based on colorimetry, optical microscopy, scanning electron microscopy, Fourier transform infrared spectroscopy, and cellulose degree of polymerization data, both before and after accelerated degradation. In papyrus, there is no clear damage threshold, and substrate degradation can always be observed and is comparable in treated (cleaned) and untreated (soiled) objects. Therefore, the decision on whether to clean papyrus using lasers is predominantly based on aesthetic and treatability (e.g. need for consolidation) criteria.