This project explores the scope of the cutting-edge terahertz time-domain (THz-TD) spectroscopy and imaging as a potentially non-invasive diagnostic and imaging tool for the study of archival documents. While some previous research successfully uncovered drawings or texts from inaccessible layers in heritage artefacts using THz-TD imaging, inscriptions in some historical documents investigated in this project could not be revealed with this technology. This work therefore explores the parameters influencing contrast in terahertz images of historical documents, in order to objectively inform curators when terahertz technologies are likely to give well-contrasted images of inscriptions in a complex archival document and are a useful non-invasive alternative to current digitization processes. These parameters include the dispersive refractive indices and absorption coefficients of various archival materials, the physical structure of documents, as well as the choice of signal parameters and terahertz imaging systems or configurations used to produce the terahertz image. This investigation was conducted systematically using historically informed models and historical documents, with different THz-TD set-ups and accessories, and complementary analytical and imaging tools. THz-TD imaging was found to be a useful non-invasive digitization technology for documents containing lamp black, carbon black or graphite but not for documents containing bistre, sepia, verdigris or Prussian blue. While deconvolution of the terahertz signal helps in distinguishing between layers in a complex document, it can also decrease the image contrast of inscriptions. The results further reveal the potential and limitations of the use of THz-TD spectroscopy for material identification in archival collections. Minium, vermilion and corrosive iron gall inks with excess iron(II) sulfate have a characteristic spectral signature below 3 THz, which can be extracted from the surface of an inked paper or parchment sheet. The project was developed in collaboration with TeraView Ltd, Cambridge, and Nationaal Archief (Netherlands).

During her doctoral studies, Tiphaine was a post-graduate teaching assistant for the MRes Heritage Science at the UCL Institute for Sustainable Heritage and was awarded an international recognition as an Associate Fellow of the Higher Education Academy, UK. She was also a reviewer for the academic journal Studies in Conservation.

Tiphaine received an MSc in Physics and Nanoscience from the PHELMA, Grenoble-INP (France) Engineering School. She has always been interested in art and heritage, which is why she also attended the art school ESAD in Grenoble as a part-time student. Her research interests include heritage science, spectroscopic imaging and non-invasive techniques.

As part of a group project with other VEIV EngD students in 2011 - 2012, Tiphaine also participated in the design and installation of an audio micro-augmentation set-up in the Grant Museum of Zoology at UCL. Micro-augmentation is non-interactive and interpretation free, and supports implicit narration, causing emotional response to an unstructured museum experience. The set-up triggers directional sound signals related to a museum artefact when a visitor passes by, which are only distinctly heard by a visitor looking at directly the artefact.

Publications and other works

Find out more about PhD candidate Cecilia Bembibre's proejct on the 'Smell of Heritage' as we discuss the successes and challeneges in creating her original research. 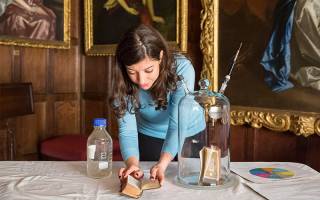