UCL ISH research ‘Contrast in terahertz images of archival documents’ has been published in the Journal of Infrared, Millimeter, and Terahertz Waves. 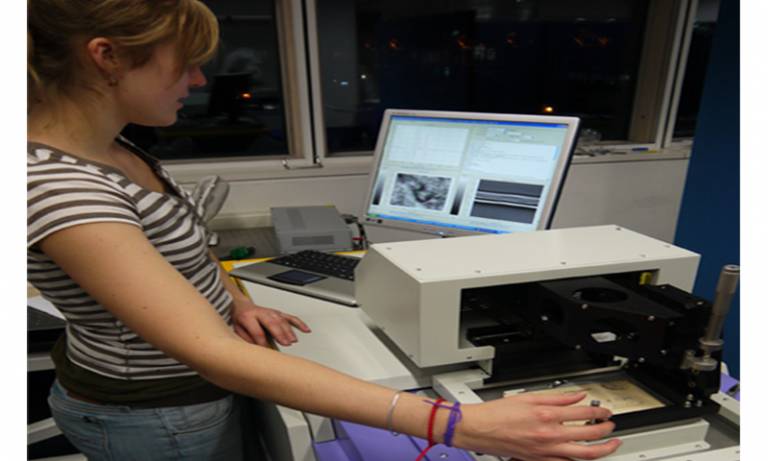 Imagine discovering your Grandmother’s correspondence in your attic, only to find the paper has degraded so severely that unfolding the letters causes them to fall to pieces.

UCL Institute for Sustainable Heritage alumna, Dr Tiphaine Bardon, explored terahertz time-domain imaging, technology that can probe a stack of documents and reconstitute the image of a selected layer within the stack. In a series of two research papers, she explores what makes a text appear contrasted when scanned with terahertz.

Terahertz time-domain imaging has raised the curiosity of researchers at UCL ISH and conservators at the Dutch National Archives due to its significant penetration depth and less powerful waves than X-ray-based imaging methods. The technique could be used to uncover drawings, texts or manufacturing marks concealed in documents difficult to access without a significant risk of damage.

Using a variety of models representative of archival documents, Tiphaine identifies the optical and topographical features of an inscription that lead to well-contrasted and thus legible characters in terahertz images. Among the studied inks, those containing lamp black, graphite and carbon black gave the best imaging contrast, whilst inks containing sepia, bistre and verdigris systematically led to a poor contrast. For inscriptions written with the latter inks, all hope of revelation using terahertz imaging is not lost as the indentations left by the writing tool on the support can also be used as a contrasting agent.

Tiphaine’s project is in partnership with TeraView Ltd and the Dutch National Archives, in the frame of the Doctoral Training Centre Virtual Environments, Imaging and Visualisation. After completing her studies at UCL in 2016, Tiphaine joined the Nagoya Institute of Technology.