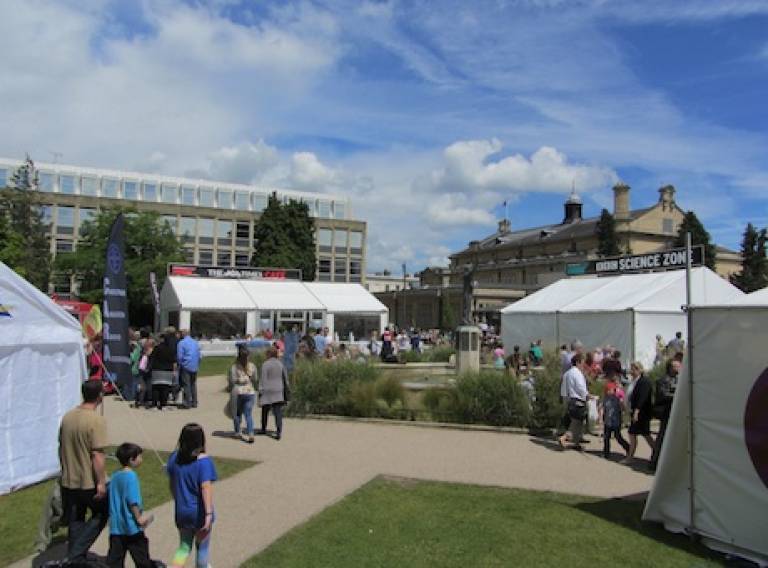 UCL-Energy MRes student Paula Morgenstern won a grant from the Graduate School to attend the Cheltenham Science Festival 2012. Here she tells us what an interesting and important experience it was:

In the pitfalls of every day work and the struggle to meet deadlines for funding applications, dissertations or whatever it is you are working on at the moment - in the middle of all this, it is sometimes easily forgotten that science is about surprise. It is about discovering the unknown, seeing things out of a new perspective and gazing at the marvellous entity our world is.

Thankfully, the Cheltenham Science Festival is there to remind us. Existing now in its seventh year and this time bigger and more varied than ever before, it seeks to make scientists and the public meet. In times of an incredibly fast growing world population and increased technological development, new means of communication have brought science and people much closer together. Science is no longer an occupation for few lone geniuses among a crowd of illiterates, but has evolved to concern everybody.

I really enjoyed my time at Cheltenham. In midst of this contemplative town in Gloucestershire, I followed fierce debates about wind power, heard how our buildings could do photosynthesis and learned why affordable energy from nuclear fusion is again still 30 years away. I also tried myself at meditating in an event on mindfulness (didn’t work very well), discussed questions of food security in the UK (60% of the food consumed here is also produced here) and laughed at some comedians (haha!). Quite a lot of comedians really and humour can be a very successful way to engage with the public, especially if the shows are not overloaded with complex information at the same time.

Apart from being inspired to rethink the role of science in society and meeting some brilliant science communicators, I really appreciated to be remind of the bigger context in which our work at the UCL Energy Institute is based in. Again, this is something easily forgotten when getting carried away about the size of U values or the precise wording of survey questions. But ultimately, energy can only be discussed alongside with population growth, food production and global equality.

In 2050, our planet will have to feed, clothe and keep between 9 and 10 billion people warm. If all of them consumed at the level we, in the developed countries, consume at today, we would need multiple planets as our planet can only sustain 2 billion people at this level. We have only one planet, on which 7 billion people live already. Who is to decide what happens to the additional 5 billion? Well, not me really.

This simple calculation makes me go back to UCL-Energy tomorrow with new energy, because it shows clearly how important reductions on the demand side are. With fusion 30 years away, a fierce debate about wind energy and a long way to go before buildings can do photosynthesis, making people and buildings use less energy here to give people in other parts of the world the opportunity to catch up, is absolutely essential.