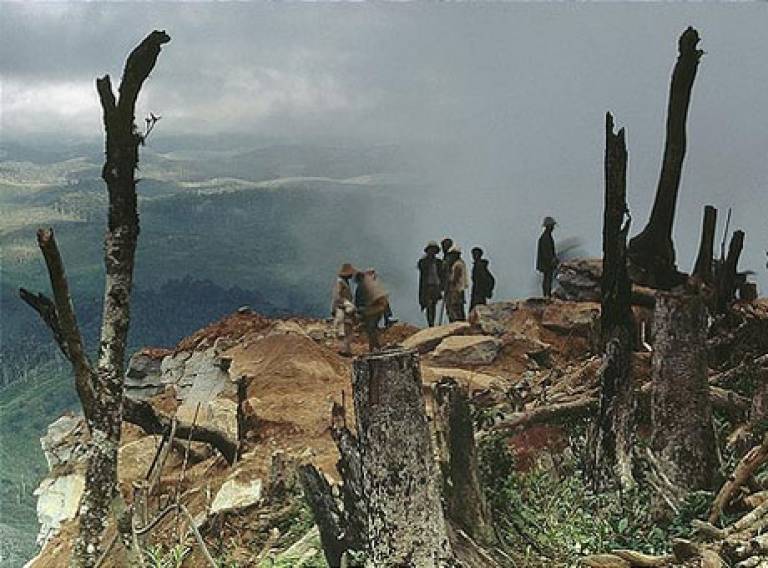 UCL-Energy PhD student, Fabian Kesicki, was recently involved in preparing a report for Greenpeace, on the shortcomings of Marginal Abatement Cost Curves, with a special emphasis on deforestation. Here he explains more...

Q: What was the aim of the report and how did it come about?

A: Greenpeace contacted us as they were preparing a campaign about emissions caused by deforestation and they were concerned that the current approach towards quantifying the cost related to reducing emissions from forests was deficient. They wanted an expert academic insight into MAC curves and their application in the forestry sector.

Greenpeace prepared their own report in which they pointed out some serious failings in the plans put forward by different countries for reducing emissions from deforestation and forest degradation (REDD) to the regulating body, the World Bank. They highlighted basic flaws, such as numbers that didn't add up and inflated baselines. They criticised the use of the MAC curve, in particular by McKinsey, who have a near monopoly on preparing reports on behalf of developing countries in order to access funds from the United Nation's REDD programme, with the goal of a) informing stakeholders - World Bank, UN, developing countries - that the consultant's methods are fundamentally flawed and b) encouraging McKinsey and others to overcome the present shortcomings of the MAC curve concept to reinforce the foundation of this approach.

Reducing emissions from the forestry sector is seen as a low-cost opportunity to reduce overall CO2 emissions, but Greenpeace were concerned that when it comes to subsistence farming, the different uses of the forest are not being costed correctly.

The figures used by McKinsey state that in order to stop deforestation from slash and ash burning, you would have to pay subsistence farmers around $1,200 (the cost for the lost opportunity), which would then reduce CO2 emissions at costs of less than €2/tonne CO2, which is very low in relation to energy-related emissions.

Q: What are MAC curves, and why is Greenpeace interested in them?

A: MACC stands for "Marginal Abatement Cost Curves" and they show the abatement potentials and the cost at which you can reduce emissions. They are easy to understand - on one axis you have cost and on the other potential for abatement and it can act as a first, rough guide to what tax you need to implement to achieve the abatement potential.

Greenpeace came to us - having seen the MAC curves previously used in the energy sector. They wanted us to carry out an analysis of what could go wrong with MAC curves and the possible shortcomings of the approach particularly for an application in the forest sector. Our report is mainly focused on the energy sector as we are the UCL Energy Institute after all, but we also had a section on the forestry sector where we addressed the additional problems faced when you use such a tool in this context.

Q: In your report do you criticise the MAC Curves themselves or the way people use them?

A: Both. McKinsey is aware of most of the shortcomings we've pointed out and they mention most of them in their report but the problem is that when you look at the executive summary - probably the only part of the report that decision-makers read- they do not mention these caveats. The problem is two-fold, on the one hand is the issue of how MAC curves are presented by those that generate them and on the other, how decision-makers somewhat naively look at the curves as the panacea. The popularity of the MAC curves is explained due to their ease of use, but the problem is that they are not a one-size- fits-all tool - they are only a starting point.

Q: So what about alternatives? Is it a case of looking for alternatives to MAC curves, of adapting them or just being more aware of the shortcomings?

A: There is still a big potential to increase the robustness and the way MAC Curves are generated. We can come up with more sophisticated models which can incorporate interactions that pay more attention to baseline issues and other shortcomings. Then of course it is important to make decision-makers more aware that MAC curves are not the only tool available and that you could look at scenario analysis and other ways of incorporating uncertainty and representing model findings as we are doing at the UCL Energy Institute.

Q: What are you hoping or what do you think the impact of the report might be?

A: I hope that the impact will be to make decision-makers aware of the shortcomings in the way MAC curves are currently generated, and that there are better ways out there to do it. To make them more aware of the shortcomings associated with this concept. Hopefully, the report will help them to use those tools more appropriately - in the sense that they are a rough guide to abatement potentials and that they can give some insight into cap and trade schemes or carbon tax levels but that they are not the only tool and it can’t provide a precise forecast of what will happen in the future.

The Greenpeace report will certainly lead to some changes in the way policy-makers think with regard to the forestry sector. One should not forget that although the overall climate change talks in Copenhagen and afterwards were considered failures, there were some outcomes which include the REDD (Reducing Emissions from Deforestation and Forest Degradation) programme and the NAMA (Nationally Appropriate Mitigation Action) funds. Countries such as the UK and Norway, who don't have large forests themselves, promise funds to developing countries that do, to help reduce emissions from forests. This bilateral scheme is managed through the World Bank and is targeted at countries such as Congo, Indonesia, Guinea and Papua New Guinea.

REDD is seen as having a huge potential to stop forest related emissions and as a cheap opportunity compared to our approach in the UK where we are limited to mainly energy-related CO2 emissions reductions.