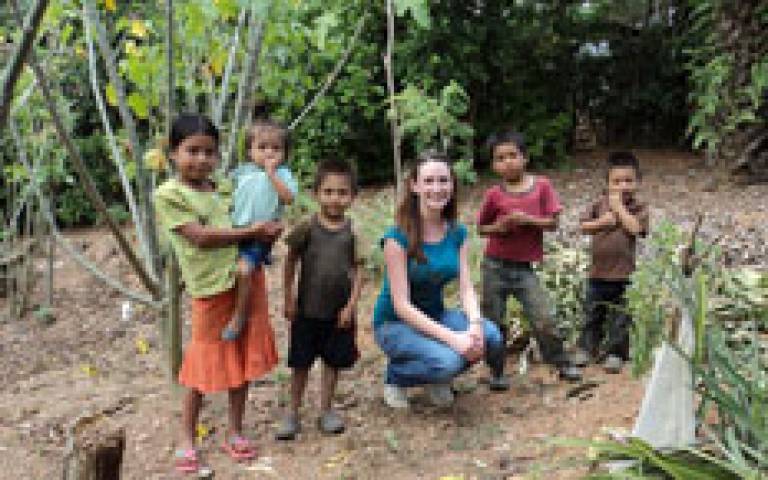 Julia Tomei is a PhD student at the UCL Energy Institute.  Her PhD focuses on the sustainability dimensions of biofuels and the extent to which smallholders can be included in the developing biofuels sector.

To further her research she recently spent five weeks in Guatemala to find out more about this largely overlooked and potentially biofuel-rich region.

Here she answers some questions about her trip, explains the importance of fieldwork and talks about the lasting effect Guatemala has had on her.

Q: Why did you decide to go to Guatemala?

A: I have long been fascinated by the diverse histories and cultures of Latin America and wanted to do my fieldwork there. There is already a lot of research on the Brazilian biofuels sector so I wanted to base my research elsewhere. The Central American isthmus is a region that has largely been overlooked to date in the biofuel debate, despite several countries being in the process of developing biofuel policies and programmes. Within Central America, Guatemala has the greatest potential due to its large, efficient sugarcane and palm oil sectors and as I had contacts there, it seemed a good place for fruitful research.

Q: Why is it important to have an international perspective to the biofuels situation?

A: Biofuels - in all their forms - are internationally traded commodities. Their use has been promoted by Western governments and businesses who have argued that biofuels can contribute to reducing greenhouse gas emissions, whilst promoting more resilient energy systems, and contributing to global poverty reduction. For example, the EU Biofuel Directive requires 'biofuels or other renewable fuels' to constitute 5.75% of the energy content of petrol and diesel sold for transport in member states by 2010.  It is important to understand the global and local impacts of such policies on carbon emissions, livelihoods and food security. Unfortunately, it appears that policy has moved ahead of the science; research has demonstrated that in some instances biofuels can be more carbon intensive than their fossil fuel counterparts and that biomass can be used more efficiently in other sectors, such as power or residential heating.

Q: Why is it so important for your research to do field work?

A: My research will be largely qualitative, which is used to gain a deep, highly detailed understanding of an issue. Qualitative research is good for investigating complex and sensitive issues, such as biofuels, and uses qualitative methods such as interviews, focus groups and ethnographic methods, including participant observation. The only way for me to collect such data will be through field work, by spending time in Guatemala talking to people and visiting plantations and biofuel plants.

A: Absolutely. It caused me not only to re-think the hypotheses but also the research design; for example, the security situation in Guatemala is such that it will be difficult to carry out the type of ethnographic research that I originally envisaged doing. However, it is not all bad news! I opted to do an initial scoping study precisely so that I could learn more about Guatemala, its people, politics, environment, energy and agriculture. I went there fully expecting to need to refine my research questions on my return, and will hopefully have a stronger research project as a result.

Q: What did you discover in Guatemala?

A: I learnt an awful lot while I was in Guatemala, not only about biofuels, energy and environment, but also about everyday life. I spoke to a wide range of people from business, government, universities and non-government organisations each of whom, unsurprisingly, had contrasting views on the way the nascent biofuel sector is developing. Perhaps more importantly were the informal conversations I had with people while I was there, which gave me insights into life in Guatemala that I would not be able to get in any other way.

A: Every time I do field research, I learn something new about myself. Its hard work being in a new country, speaking and thinking in a different language, and meeting new people every day, but it’s incredibly rewarding. Having the opportunity to experience different cultures (Guatemala has 22 indigenous peoples) and a new political context has also enabled me to reflect on situations in the UK from a different angle.

Q: What memory will you keep of Guatemala?

A: The friendliness and warmth of the Guatemalan people, despite a protracted civil war, growing social violence and worsening socio-economic conditions.