The London Solar Opportunity Map created by UCL Energy Institute has been launched by GLA, showing the energy potentially available from photovoltaic (PV) installations or heat from thermal collectors, on all roofs and open land within the M25 motorway. 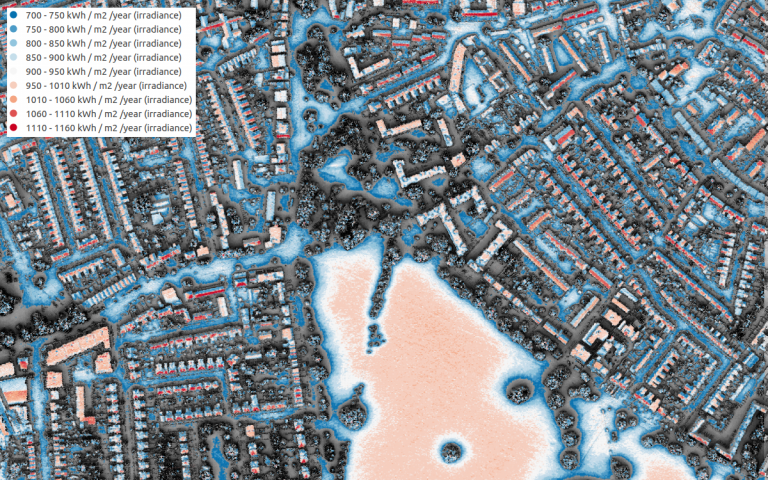 On 3rd September the Greater London Authority launches the Solar Opportunity Map. This has been created by a team at the UCL Energy Institute and the UCL Centre for Advanced Spatial Analysis. It shows the energy potentially available, either electricity from photovoltaic (PV) installations or heat from thermal collectors, on all roofs and areas of open land for the whole of the capital out to the M25 motorway. It is based on a 3D model of terrain, buildings, other structures and trees derived from LiDAR – laser measurements made from overflying aircraft. This is a tool that will help to achieve the London Mayor’s targets of 1 gigawatt of installed solar power by 2030, and 2 gigawatts by 2050.

Calculations are made of the amounts of direct and diffuse solar radiation falling annually on all surfaces, taking account of overshadowing by neighbouring buildings and trees. From these figures, the solar energy potential is estimated, allowing for the slopes of roofs and for different solar technologies. A minimum threshold is set, below which installations are likely to be uneconomic. The character of land surfaces and their suitability for solar are represented in the Map: some areas such as roads, woodlands and Royal Parks are excluded. The Map is linked to the London Building Stock Model, which makes it possible to know the uses and potential energy reductions if solar panels were installed.

The Map is made available through a web interface on the Greater London Authority's website.

Besides policy making by the GLA, it is intended for use by householders, building owners, solar installers, and investors in solar power. Data are included in the Map on some 100 megawatts of existing solar installations. Early analysis of the Map shows that around a quarter of the Mayor’s 2-Gigawatt target could be met with PV on the roofs of 4000 large warehouses. Alternatively, the entire 2Gw could be achieved with installations on a third of a million houses, the majority of them built before 1939.

The members of the team responsible for the Map are Stephen Evans, Ivan Korolija, Dominic Humphrey, Gareth Simons, Paul Ruyssevelt and Philip Steadman.