UCL-Energy PhD student Tia Kansara was invited to attend the Rio+20 United Nations Conference on Sustainable Development, here she tells us about her time in South America: 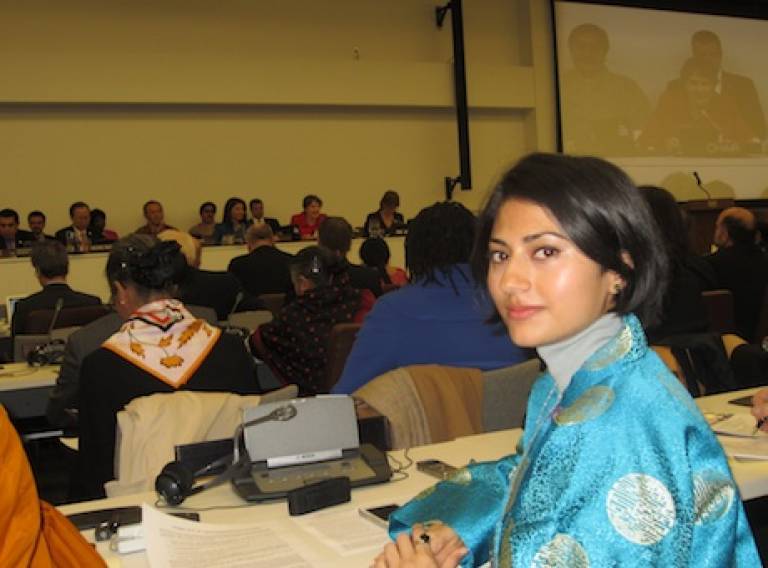 Who hasn’t heard about Rio+20?

I aim to tell you all about my visit to Rio, it was my first time to South America and what an experience it was!!

The Earth Summit in 1992 in Rio de Janeiro, Brazil was a defining watershed focusing attention on global environmental problems, the risks of climate change and the need for collective action. Rio+20 on June 20-22nd 2012 (dubbed as the follow-up to the original summit in Rio plus twenty years) aimed to revive a process often seen as faltering. Instead of climate change, Agenda 21 - the theme of 1992, this year the focus was on “The Green Economy”. I was present as an official delegate in my capacity as Director of Kansara Hackney Ltd, thanks to the UIA (Union Internationale des Architectes) President, Mr Albert Dubler and Prime Minister of Bhutan, HH Jigme Thinley.

The official 3-day event attracted over a hundred heads of state and governments, making it one of the most important international conferences of 2012. It was held amid the global financial crisis, growing unemployment in the West and worsening environmental degradation Worldwide. Rio+20 followed on from a United Nations January 2012 report entitled: “The future we want”, the Rio+20 report “Final Outcome” showed a more general overview of goals where the implementation process was defined. Some political observers came away disappointed because the bar was not raised. Some major leaders like President Obama and Prime Minister David Cameron did not attend.

One of the stars was the United Nations Secretary General Ban Ki-Moon:

“I am encouraged by the more than 700 concrete Commitments registered at the Conference from governments, business, industry, financial institutions and civil society groups, amongst others.” The main thrust by the Secretary-General in pushing for sustainable development came when he announced:

The role of the new economy I thought was very elegantly written up and presented by the Royal Government of Bhutan in April 2012 at the UN General Assembly, which I was fortunate to attend. This event underlined a major success in the UN accepting the report “New Economic Paradigm” written with all of our comments, questions and suggestions!

Raising the bar for sustainable development and the new economic paradigm will be an issue of the next 20 years! This is an issue my PhD aims to tackle through the lens of Energy.

I am under the supervision of Prof. Tadj Oreszczyn at the UCL Energy Institute. My PhD research focuses on the Energy efficiency of Abu Dhabi’s built environment. The key players of Abu Dhabi’s future energy needs were present at Rio+20. At an event hosted by “Sustainable Energy For All” I met some of the most influential people in the area of my PhD: UN Secretary General Ban Ki-Moon, Masdar CEO Dr Sultan Al-Jaber, South African President Zuma, Chair of UN-Energy Kandeh Yumkella, Minister of Mines and Energy of Brazil Edison Lobão and Mr Robert Orr, Secretary to the UN-Sec-Gen.

My trip was not all conference! In between the main events I took a walk around the Favelas (illegal settlements) with the Italian Minister of the Environment and the Italian Ambassador to Brazil included some Urban Agriculture for fun: 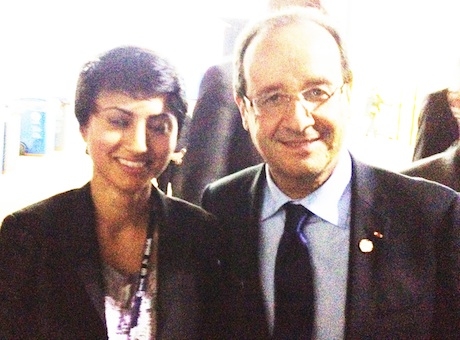 Talking of fun, it was nice to be cuddled by the French President Hollande after his speech saying he would be standing up for Europe:

Wow what a trip! I had a long meeting with Prof. Muhammad Yunus where I was invited to lead an open innovation session in Vienna:

And finally – meeting the oldest architect in the World: Arch. Oscar Niemeyer (104 years old), the designer of the UN in New York and Brasilia! I was fortunate to be given as the director Kansara Hackney, the sole authority to re-launch and complete his scheme in Lebanon – The Tripoli Fair. I will be embarking on this project after my PhD.

I was charmed when I visited his office and his great grandson signed on behalf of his Grandfather’s book and presented a book to the Bartlett Library!

Middle: Tia (third from left) and other energy delegates including Ban Ki-moon, Secretary General of the UN