Exploring the transformative potential of alternative water supply arrangements undertaken for and by the peri-urban poor in three urban regions. 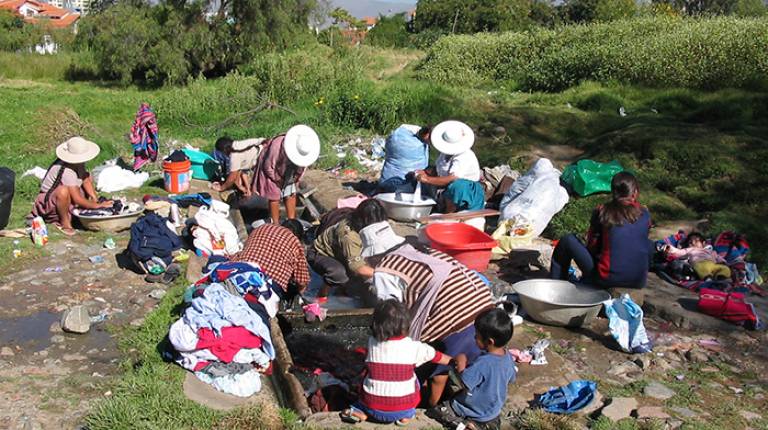 Translocal Learning for Water Justice explores the transformative potential of alternative water supply arrangements—small-scale, low-cost management practices, and new configurations of water governance—undertaken for and by the peri-urban poor in three urban regions: Kolkata (India), Dar es Salaam (Tanzania) and Cochabamba (Bolivia). The documentation and analysis of these practices aims to build the foundations of an innovative, grounded and in-depth exploration of the extent to which such arrangements can enhance water justice in a context where unmet needs are growing fastest, and where conventional centralised networks are unlikely to become the norm any time soon.

Foundational to the project is the establishment of a translocal learning alliance in collaboration with the three project partnerships. This seeks to explore the specific and localized manifestations of water injustices and alternative arrangements, mapping these approaches as a source of dialogue, comparison, and learning across the three cases.

A sizeable percentage of women and men across the urban Global South still experience significant levels of water poverty. Urbanisation without infrastructure is particularly acute in peri-urbanising areas, expected to absorb almost half of the 1.4 billion people who will join the world urban population by 2020. While these areas continue to be marked by high levels of inequality in water services provision, they are also sites of the active experimentation in new ways to fill in provision gaps.

Where publicly or privately operated ‘policy-driven’ utilities fail to serve the majority of the peri-urban poor, residents of informal settlements rely upon a wide spectrum of ‘needs-driven’ practices which often remain ‘invisible’ to policymakers and lack formal support strategies and mechanisms. These practices not only represent efforts to obtain access to basic needs, but can also act as a process to activate citizens’ rights.

This material is based upon work supported by seed grants from the ISSC under the Transformations to Sustainability Programme. The Programme is funded by the Swedish International Development Cooperation Agency (Sida) and serves as a contribution to Future Earth. Supplementary support for seed grants is provided by the Swedish Secretariat for Environmental Earth System Sciences (SSEESS), the Netherlands Organisation for Scientific Research (NWO), the Economic and Social Research Council (ESRC) UK through the Newton Fund and the National Research Foundation of South Africa.

The three urban regions covered by this network are all characterized by a process of peri-urban expansion without infrastructure, disproportionally affecting the ability of poor women and men to access water and sanitation services.

Yet outside of formal service provision, in each context women and men have adopted flourishing ‘needs-driven’ practices. These (often under-recognised) practices are increasingly establishing new paths to service coproduction, with the potential to operate at the city scale.

In Cochabamba, the state has supported the development of drinking water committees (DWCs), scaling up decentralised water supply systems established by communities, often in conjunction with other non-state actors. Estimates indicate that by 2006 there were about 150 DWCs operating in peri-urban Cochabamba. A more recent study identified about 45 communities that have engaged in degrees of service coproduction, each serving an average of 375 households.

Nowadays, such ‘service co-production’ platforms include water committees and neighbourhood associations –funded respectively by the Ministry of Water and the Environment and the municipality. As these platforms have grown in size, their institutional architecture has become more complex and diverse, and their potential impact has not yet been assessed.

This has resulted in a wide range of informal and semi-formal practices by the peri-urban poor, in which water vending is an important source of income generation. These include deep well/borehole owners who sell water to neighbouring households or to vendors who distribute it using bicycles and push carts as well as to bulky suppliers operating water tankers. Other forms of access include community-managed systems with NGO and/or government support. There are plans to scale up some of these initiatives with ongoing work to document the conditions under which this can occur.

The East Kolkata Wetlands (EKW) in the eastern part of the city is considered the peri-urban interface (PUI) of Kolkata. Apart from its contribution to the ecosystem it operates as the unique natural waste recycling system infrastructure for the entire city, absorbing around 810 million litres of sewage on a daily basis. Through underground sewers the waste water (domestic, industrial and drainage) opens to canals excavated during colonial times, which flow to the eastern estuary.

The EKW not only plays an active role in the natural treatment of waste water, but also facilitates the production of sewage-fed fish (20% of the total production supplied in Kolkata markets), vegetables and cereals through indigenous community knowledge and techniques. The bheris, or fish culture ponds, dotting the eastern landscape benefit from the waste water flowing through the open canals, pumping in the nutrient-laden water to enhance fish growth and productivity.

The adjacent Dhapa area is an integral part of this natural system, and has been the dumping ground for untreated municipal solid-waste (MSW) for over the past 100 years. Here marginal farmers produce 25% of the total vegetables supplied in Kolkata markets (150 tonnes daily), using organic solid waste and canal water for irrigation. Informal sector rag-pickers segregate the recyclable materials from the MSW, playing an important role in the city’s waste management system.

Unfortunately, in spite of the huge contribution of the peri-urban poor wetland dwellers to the sanitation sector, these residents continue to lack formal access to basic service provisions like drinking water. In addition, they face a constant threat to their livelihoods due to the rapid urban sprawl in the eastern part of the city. This growth increasingly comes at the cost of the wetlands, affecting sustainable flows between the city and its PUI in the long-run.

A series of reports, written by academic and non-academic partners participating in the research, have been produced to provide an assessment of water justice in the three urban regions.

The first research activities began in Cochabamba, Bolivia in December 2014. The was followed by a visit to Kolkata undertaken by member of the UK-based and Tanzanian teams.

In February 2015 partners from each of the three participating cites, and academics from the UK, convened in Dar es Salaam for a week-long workshop. During this workshop we visited several sites in the cities, exchanged ideas and experiences from different countries, and fleshed out a full research proposal which was submitted to the ISSC in March 2015.

Outputs from this workshop include a series of water justice city profiles (above) and a series of videos on Peri-urban pathways for Water Justice in India, Tanzania and Bolivia, Translocal Learning [forthcoming] and short videos characterising each of the participating cities [forthcoming].

The Translocal Learning for Water Justice network is coordinated by the Development Planning Unit at University College London. The network has partnerships in three cities consisting of academic and non-academic partners:

Development Planning Unit (DPU), UCL
The DPU is a department in the Bartlett faculty of the built environment at University College London. It conducts world-leading research and postgraduate teaching that helps to build the capacity of local communities and authorities and a wide range of organisations from the public, private and civic society sectors working towards socially and environmentally just and sustainable development in the global south.

Centro Agua at Universidad Mayor de San Simón
The Andean Centre for Water Management and Water Use (Centro A.G.U.A.)
Established as a Centre of Excellence, has initially specialized in the Andean region’s irrigation problematic and now covers a wide range of water-related areas including basin management and governance of water systems from a sociotechnical perspective in interaction with different institutional actors.

AGUATUYA
AGUATUYA is a widely recognized organization that promotes decentralized water and sanitation innovations in peri-urban areas through participatory and sustainable solutions that improve people’s lives and protect the environment.

The Institute of Human Settlements Studies at Ardhi University
The goal of ISHH is to contribute to the improvement of human settlements living conditions and quality of life of all people in urban and rural areas in Tanzania by carrying out research, consultancy services, training, and dissemination of research results through documentation and organizing conferences, seminars, workshops and symposia on human settlements development issues.

Centre for Community Initiatives
(CCI) supports slum development initiatives in housing and shelter, water and sanitation, savings and credit, and health. CCI works in alliance with federations of the urban poor and has a well-established record in mobilizing local communities to channel and leverage collective savings into improved service provision, as well as in working with the public sector and more recently with the private sector.

Prof Wilbard Kombe at The Institute of Human Settlements Studies at Ardhi University Dr. Tim Ndezi at the Centre for Community Initiatives (CCI)

Dr. Jenia Mukherjee at the Institute of Development Studies Kolkata Dr. Asish Ghosh at ENDEV (A Society for Environment and Development)