The research examines the implications of climate-risk related resettlement and relocation policies in cities across four countries: Uganda, Peru, Colombia, Mexico and India. 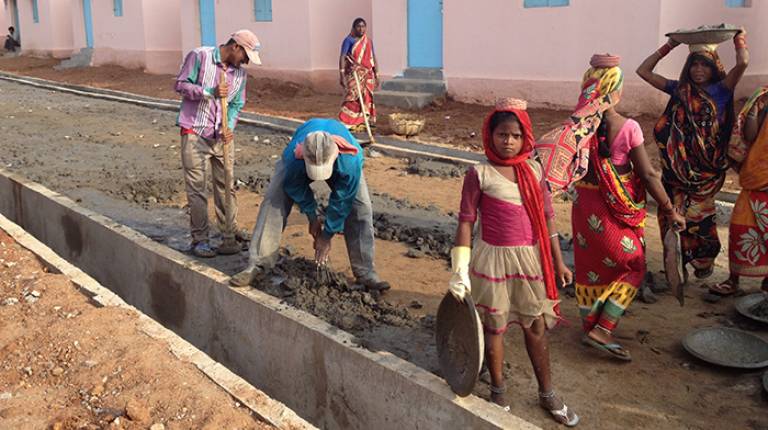 Floods, heat waves, cyclones, landslides and other events often have significant impacts on people’s lives and livelihoods, particularly those of the poor. Risks are exacerbated by the changing climate and unplanned urbanisation. If unmanaged, these risks can undermine hard-won development gains.

Many national and local governments are resettling people who live in areas affected by climate-related disasters. Resettlement can occur as part of national level programmes to move people out of high-risk areas, or as part of a local government development plan. This is often accompanied by the upgrading of vacated areas to reduce risk, or to change land use, with implications for those left behind or still living in the surrounding area.

Relocation and resettlement may reduce a region’s future climate-related disaster risk, but can also increase people’s poverty and vulnerability. The processes for making and implementing decisions on post-disaster relocation, pre-emptive resettlement and on-site upgrading play a large part in determining whether outcomes are socially just, and whether they actually reduce future risks for individuals, urban regions and society as a whole.

While urban resettlement programmes are widespread, the social and economic impacts of resettlement and relocation on individuals, society and urban regions are not well understood either by experts or by those enacting them.

This research, carried out by The Bartlett Development Planning Unit (DPU) at UCL, the Indian Institute for Human Settlements (IIHS) the Latin American Social Science Faculty (Facultad Latinoamericana de Ciencias Sociales (FLACSO), and Makerere University examines the various social and economic implications of climate-risk related resettlement and relocation policies in cities across three continents. It seeks to understand the political, economic and institutional contexts in which resettlement takes place; the costs and benefits of resettlement from both the government and individual’s perspective; and how resettlement impacts people’s well-being and resilience over different time frames. The research will compare approaches and identify which policies and practices for climate-related resettlement deliver the most beneficial outcomes.

The framing and approach to policy engagement is tailored for each country (Uganda, Peru, Colombia, Mexico and India), and informed by a steering committee including relevant government representatives. Outputs will include a decision framework and training materials for use by local governments involved in the process of resettlement.

Relocation vs. Resettlement vs. Rehabilitation vs. Evictions

As defined for this research, resettlement is a major integrated, comprehensive movement of people and families which normally involves significant distance between the origin and new location. Resettlement involves not only new housing and services but also new social and economic relations, and new challenges such as access to work and social cohesion. Relocation, meanwhile, refers to non-systematic movements of families or individuals from hazard-prone locations to nearby areas. Relocation therefore involves less upheaval in terms of access to work and social networks. Rehabilitation could be either relocation or resettlement, but could also mean in-situ upgradation. Evictions are cases where households are moved forcibly without an alternate location planned for the move.

Disaster risk management is seen by some (UNISDR, 2011) as comprising three distinct yet complementary types—corrective, whereby existing risk is the centre of attention and reduction the goal; prospective, where the avoidance or prevention (within bounded limits) of future risk is the goal; and compensatory, where residual risk is dealt with through different social and economic mechanisms. The types of intervention possible for each of these types of management are wide in scope. Corrective management involves everything from retrofitting buildings to environmental recovery and reforestation and land use decisions using relocation or resettlement as a tool.

Prospective management involves land use and environmental planning decisions to prevent exposure and vulnerability in the future to public investment decisions informed by risk criteria and reduction goals. Avoidance of hazard-prone locations through urban planning mechanisms, identification and access to safe land for poorer populations, etc., are seen as prospective measures. Compensatory management involves dealing with residual risk through mechanisms such as risk transfer, insurance, cash transfers and compensations, social security networks, and resilience building in communities and families. Recovery and reconstruction post impact may be of corrective, prospective or compensatory types.

While risk reduction could in itself be a developmental objective or outcome, but for the purposes of our work the difference between the two is that the latter is motivated by reducing people/systems/city's risks as priority, whereas the former aims at larger economic gains or is primarily motivated by uses for the vacated land.

Definition of ‘Risk’ and who decides

Historically, risk was primarily associated with an external force or agent. But it is now well accepted that risk is a composite of external as well as intrinsic characteristics of elements that affect their propensity to risk [1]. It can arise out of natural (tectonic or climatic) as well as man-made hazards (unsustainable resource management, unsafe water supply and sanitation practices, etc.). Some of these hazards are exacerbated both in intensity and frequency by climate change. These are accentuated further by the elements’ physical location and specific characteristics making them more vulnerable to certain external forces. Often people’s and system’s ability to respond to these hazardous events puts them in better or worse situations as compared to some others, and these capacities need to be explored and improved in order to reduce overall impacts of risk. These risks vary over time – both in impact and their accumulation, and vary significantly by geographical location of the elements.

The underlying reasons for these vulnerabilities may arise out of socio-economic process, which may ultimately be quite remote from the hazard event itself. But it is due to these vulnerabilities, that the impacts felt by some people may be more severe than others. Often, there are deeper socio-political reasons that certain people are forced to live in areas which makes them more exposed to certain hazards, and thereby at greater risks. This lack of choice exacerbates their vulnerabilities, exposure and often also the abilities to respond, and in the face of an event leaves them even more vulnerable than before. It is this that Wisner called the cause and effect model of vulnerability (Wisner, Blaikie, Cannon, & Davis, 2003).

Risks are not limited to sudden ruinous events, but they also accumulate over time in the form of recurring conditions of moderate intensities. Intensive risks are risks associated with the exposure of large concentrations of people and economic activities to intense hazard events such as high intensity earthquakes, severe floods and cyclones, etc., which can lead to potentially catastrophic disaster impacts involving high mortality and asset loss. On the other hand, extensive risks are widespread risks associated with the exposure of dispersed populations to repeated or persistent hazard conditions of low or moderate intensity, often of a highly localized nature, which can lead to debilitating cumulative disaster impacts (UNISDR, 2009).

What individuals and communities might identify as risk, informed by their own capacities to cope, often varies from institutional imagination of risk. For e.g. people may have learnt to move temporarily in the face of floods or cyclones, but would consider access to work, schools and health systems as major risks which are not always in their control, whereas institutions continue to respond to hazard risk and this leads to varying risk reduction responses from the various involved stakeholders. The authors urge the readers to distinguish risk definition by who defines and who bears the risk throughout the report and following work in this project.

[1] UNISDR defines risk as the probability or threat of quantifiable damage, injury, liability, loss, or any other negative occurrence that is caused by external or internal vulnerabilities, and that may be avoided through preemptive action.

Nature of seismic vs. hydro-meteorological risks

Following from the definition of risk, is another distinction between seismic and hydro-meteorological risks: while the latter can be predicted using early warning systems, and responses can be planned accordingly, the former has had no such technological advances yet. When institutions take decisions on risk reduction measures, they may consider this distinction and try and avoid resettlements and relocations as much as possible for ‘cheaper’ alternatives in the case of non-seismic (most often climatic) risks. (This is aligned with the Latin American policy context of ‘un-mitigable’ risk, where resettlement is considered as the last resort, when everything else is more ‘costly’ and less effective in reducing risks.)

The conference's aim was to strengthen the capacities of officials from various institutions related to Disaster Risk Management in the generation of knowledge of risks through the use and application of Information System Risk Management and Disaster Risk evolution. The event was organised by the National Center of Disaster Risk Reduction - CENEPRED. Guest speaker Dr. Allan Lavell (FLACSO - Latin American Faculty of Social Sciences and principal investigator for the Reducing Relocation Risk project Latin America)

Objectives:
Understanding of good practices and areas for improvement in the implementation of the Law on population resettlement in the imminence of the phenomenon "El Niño" 2015-2016.
Particularly:
a) To sensitize officials, authorities and people interested in the implications of FEN 2015-2016.
b) To promote discussion on measures to implement post-disaster under the law of population resettlement

The aim of  this  workshop was site upgrading to understand  the context of R&R  at  the local level in relation to  the  nature  of  climate  induced  risks  and  how  risks  manifest  themselves  in  the  context  of urban  areas.  The  discussion was  aiming to  learn  how land  use  planning  and  resettlement policies,  and  other  legal  and  normative frameworks work  at  the local,  regional,  and  national levels.  The  various  implementation  challenges  faced  by  the  stakeholders,  as  well  as  the varying  outcomes  and  experiences  of  R&R were  to be  shared  between  participants.

The aim of the consultation was to understand the context of R&R at the local-level in relation to the nature of climate induced risks and how risks manifest themselves in the context of urban areas. The discussion was aiming to learn how land use planning and resettlement policies, and other legal and normative frameworks work at the local, regional, and national levels.

The objective of this short document is to bring together the more salient aspects that derive from a short diagnostic exercise undertaken in Peru, Mexico and Colombia, on the demand for and the pr ocess of resettlement when faced with climate related risk and disasters. This exercise was undertaken as the first phase of a wider research process on resettlement and decision making and its associated costs and benefits in Latin America, which in itself forms part of a wider research endeavour including Africa and India. The full diagnoses for the three Latin American countries is in Spanish

The present regional report provides a summary of the research findings, conclusions and recommendations on decision making and implementation in cases of population relocation and resettlement under conditions of hydro-meteorological hazard and stress in three large Latin American countries-Mexico, Colombia and Peru.

Assessment of the impacts of demolition of houses along Msimbazi river