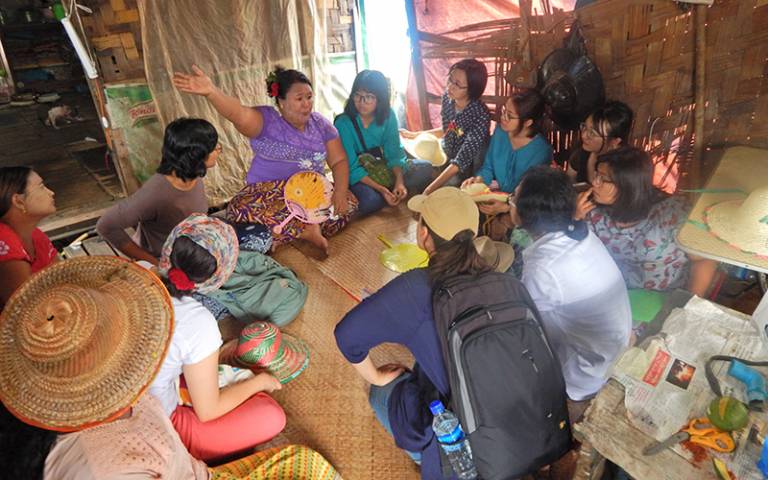 As an Indonesian who has lived in Bandung for almost all my life, walking in the hilly neighbourhood of a high-density residential area is a daily occurrence. I was just an architecture student when I volunteered to organise an annual community development project where we built a public space for a community in the said neighbourhood. A year later, that community utilises that space to celebrate Kartini Day. Two of my friends were also selected as judges for the kids drawing competition. I felt weird, standing on what was once an urban leftover space, now transformed into a lively space for the community.

After graduation, I worked for an architectural firm while also working part-time as a community architect with Praksis, an Indonesian development institution, where I delve deeper into urban matters. At that time, I would say that working in development was my side gig. I learnt that Praksis’ Director is one of the Building and Urban Design and Development (BUDD) alumni at the Development Planning Unit (DPU). From there, I learned about the course, and I enrolled as a student two years later, in 2017.

Studying in London was astonishing. I got to meet and learn from intelligent people from various countries with diverse backgrounds and capabilities. The course itself was rigorous and exciting. I really like how they introduce new ideas to me, one of them being the idea that practice could overlap with theory and vice versa. It is different from what I had learned, where I was told that, to paraphrase, practice is different from theory, so we must leave those on the bookshelves. If I reflect on that a little bit, what I did with Praksis was never taught at the architecture school. Even though the end goals were the same, to build something for someone else.

That mindset was reflected best in how aside from working diligently, conducting research with our computer, we also have to exhaust ourselves working on the field, especially in BUDD Camp and Field Trips. During that one year, our class had the opportunity to work with communities in Brescia, London, and Yangon. We learn to build our work ethics in development through meeting real people under different contexts.

After the BUDD program, I got an opportunity to join the DPU/ ACHR Fellowship. I worked with Women for the World (WfW) in Yangon. They are a local organisation that utilises community-based practice to solve housing and land ownership issues. They have ‘let the people do it’ as their vision, which is the most fascinating element in their work. I was amazed by how the facilitated community, Women Saving Development Network (WSDN), operates after ten years of working with WfW. They are mobilising themselves; they do knowledge exchange and training between them; they look for the land and house opportunity themselves; most importantly, they support each other. Those are what I think a sustainable development should aim to be.

Experiences in London and Yangon taught me valuable things about ethics, research, and practice in development. Almost two years after the fellowship, I went back to Jakarta and currently working as a Consultant for the World Bank, focusing on self-sustainable communities and affordable housing. Similar sphere, related practices, different challenges. What I learned from BUDD did not only carve my path towards my current career and built my framework in conducting research, but also fortified my thinking and affected how I made my decision at work. I am looking forward to more that will come.