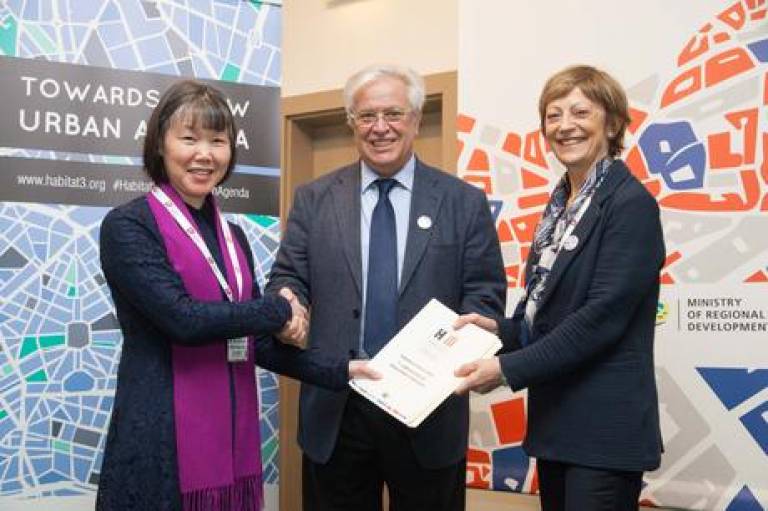 The Habitat III European Regional Meeting took place in Prague between 16th and 18th March 2016. It covered the fifty-six Member States of the United Nations Economic Commission for Europe. The key theme was how to meet the challenge of sustainable housing in livable cities, although a wide range of topics were addressed by the plenary discussions and numerous side events during the meeting. The DPU’s Le-Yin Zhang attended the meeting at the invitation of Habitat III Secretariat in her capacity as a co-leader of Habitat III Policy Unit 7, along with some ninety attending experts and co-leaders from the ten Habitat III Policy Units.

Joan Clos, the Secretary General of the Habitat III conference, gave a keynote speech where he contrasted an ‘old paradigm’ that focuses on the problems of urbanisation with a ‘new paradigm’ that treats urbanisation as a tool for development. Another keynote speech was given by Jan Gehl, the Danish architect-turned urbanist and consultant, who has championed ‘the human scale’ in architecture and urban planning. On reflection, Le-Yin commented that "his emphasis on livable cities set the tone for the whole meeting.  He advocated a new paradigm of urban development that is driven by a fundamental concern for life and what attracts people to cities”.

In a special session on the 17th March, representatives of the ten Habitat III Policy Units formally presented the Policy Papers to Dr Clos and Ms Maryse Gautier, Co-chair of the Bureau of the Preparatory Committee of the Habitat III conference and Minister of Urban Development and Housing, Ecuador. Le-Yin delivered the presentation for Policy Unit 7 on the behalf of DPU and our co-lead organisation the Korean Research Institute for Human Settlement.

1) Productive employment, job creation and the enhancement of livelihoods represent key challenges in urban economic development. This is because globally there are a lot more people who are poor than who are unemployed. Moreover, urban residents around the world all need productive and decent work that will provide the basis for strong livelihoods and personal wellbeing.

2) The sheer diversity of urban economies means that it would be self-defeating to try to offer policy prescriptions for all cities. Instead, a two-pronged approach is needed. First, cities need to address underlying conditions that support inclusive economic development, such as efficient, transparent and equitable regulation and effective infrastructure services for all. Second, cities must proactively facilitate an inclusive economic development by working with all stakeholders in the economy. It is stressed that for cities to do so, they require the governance mandate and capacity for this role. There can be no strong urban economies without city managers who understand their economies and know how to make them stronger.

3) The strengthening of urban economies requires better urban governance and the willingness to invest not only in infrastructure, businesses, but also in social capital and human capital at the city level and in the communities.

Her presentation resonated with the theme of people-centric development at the meeting and was well received by those in the session.