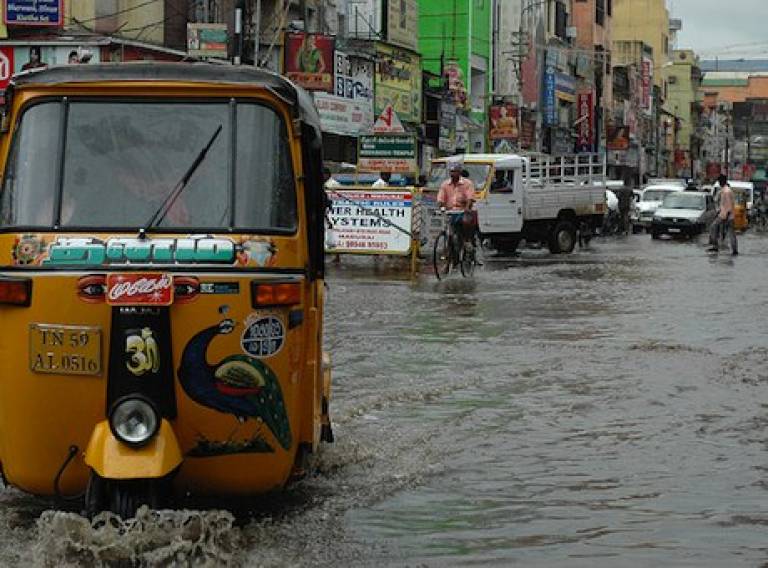 Over the last year Adriana Allen, Vanesa Castán-Broto and Caren Levy from the DPU – now joined by Cassidy Johnson and Jayaraj Sundaresan - worked in partnership with Atkins and the UK Department for International Development (DFID) to develop a new integrated approach to urban development – Future Proofing Cities (FPCs) – focused on supporting cities in the global south to respond to the risks and vulnerabilities associated with climate change and resource scarcities while building upon their capacity to act.

The ‘future proofing’ approach has gained traction with a range of cities and international agencies including the World Bank, Rockefeller Foundation, Cities Alliance, and ICLEI. DFID are also keen to use the approach to inform the deployment of climate finance relevant to cities in South Asia (including India).

Supported by the Climate and Development Knowledge Network (CDKN), this one year action-research project will work closely with city and local stakeholders to apply the Future Proofing Cities approach to two cities in India: Bangalore and Madurai. The objective of the project is to support the development of future proofed urban development strategies and investment plans in Bangalore and Madurai by further investigating the spatial manifestation of risks and vulnerabilities in these two urban-regions and the scope for strategic collaborative action that can support grounded and long-lasting interventions.

Bangalore and Madurai showcase some of the challenges facing large and lower tier cities. They both face significant environmental risks to their future prosperity. The project will build on strong existing momentum for action. The two cities span different urban types in the Atkins-UCL Future Proofing report based on the most significant environmental risks they face. The cities also differ in their current response to risks based on the strength of their urban economies, governance, planning and delivery capabilities, providing opportunities to better understand how varying capacity shapes policy responses to future proofing.

Bangalore already has relatively high carbon emissions and energy use, and risks further locking itself into a high carbon, high energy pathway unless it takes action now to future proof. Research by the Indian Institute of Science (IIS) suggests that Bangalore has the third highest carbon footprint in India and a rapidly rising energy use, primarily down to electricity consumption relating to buildings. Transport networks in the city are also heavily congested and most travel is by motorised modes. The city also has significant emerging risks to its water security. The city is at an important moment in revising its masterplan for 2031 and associated infrastructure programmes.

Madurai contrasts with Bangalore in terms of the nature of the risks it faces and in terms of its size and response to risks. Madurai’s population is due to double in the next twenty years and the city has an important opportunity to avoid locking itself into an energy intensive, high carbon, sprawled development pathway. Shaping the travel choices of its growing population will be key to this as they look to shift modes from walking to 2/3 wheelers and cars. Madurai is located on the Vaigal River and parts of the city experience fluvial flooding and flooding from storm water run-off which may intensify with increasing climate variability. Madurai also faces risks to regional support systems within the city catchment: water security is an emerging issue and there are pressures on fertile agricultural land and the wetland lake system which is a defining feature of the city and an important ecosystem.