Since July 2020, the DPU-hosted project OVERDUE “Tackling the sanitation taboo across urban Africa” has been exploring gendered experiences, norms, practices, and infrastructure related to human waste in African cities. 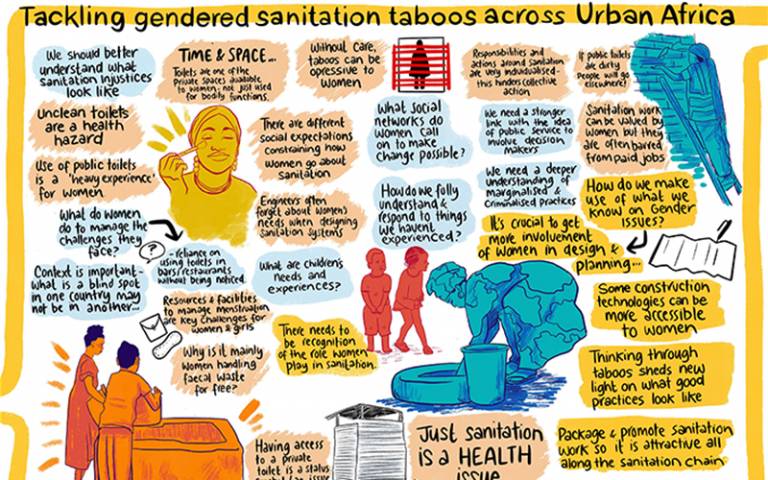 We are glad to announce that several OVERDUE audios, videos and recorded webinars are now online, hoping they will be useful to designers, activists, researchers and practitioners interested in supporting just sanitation pathways.

In September 2021, a workshop brought together institutions in Tanzania, Sierra Leone, Mozambique, DRC, Madagascar, Ivory Coast, Senegal, France, Denmark and the UK to reflect on the voicing just sanitation campaign and broaden the perspective on women’s sanitation experiences.

Four African feminist organisations, GEPALEF (Ivory Coast), SiMIRALENTA (Madagascar), CFCEM/GA (DRC) and OGDS (Senegal) followed-up on these discussions with the publication of a blog-post on “Toilets as seats of gender equality” and the production of four short films in Abidjan, Antananarivo, Bukavu and Saint Louis. These tackle body and toilet related taboos, women’s invisible domestic work in sanitation, the impacts of unadapted public facilities, as well as women’s aspirations as workers and stakeholders of urban sanitation systems.

The four 10-minute films were presented during a public webinar on November 12 2021, and discussed by researchers and experts from Brazil, India, Sierra Leone, Mozambique and Tanzania.

All these elements echo the UN Special Rapporteur videos on why we should care about toilets, and are resources we will build on and enrich as we continue our journey towards sanitation justice. To know more and join the conversation, check out OVERDUE’s website or twitter account @Just_OVERDUE.