Dr Catalina Ortiz was invited to the 2019 World Human Rights Cities Forum, held in the city of Gwangju, Korea (Sept 30 – Oct 3), to be part of the Special Session on the Right to Housing in Asia. 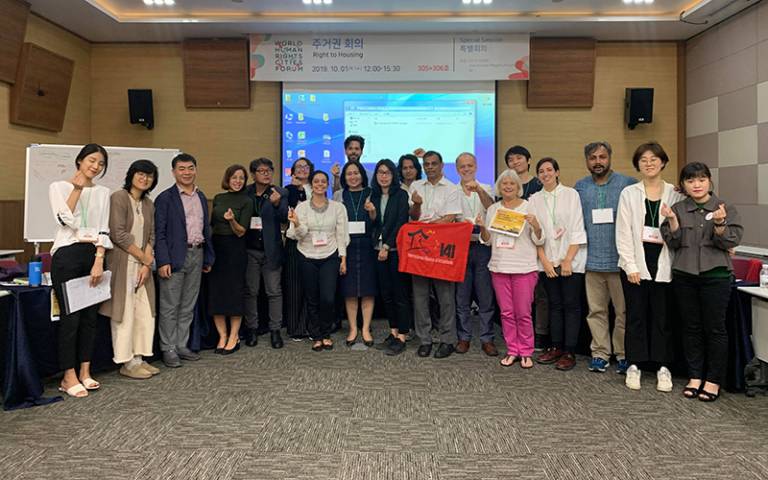 The World Human Rights Cities Forum (WHRCF) was conceived as a platform for policy exchange and partnership development. It is the most important rallying point for local authorities, activists and researchers on the issue of human rights, and has been hosted yearly since 2012 by the Metropolitan City of Gwangju with the support of the Gwangju International Centre (GIC) and the UCLG Committee on Social Inclusion, Participatory Democracy and Human Rights (UCLG CSIPDHR).

A Special Session on the Right to Housing in Asia was organised by the CSIPDHR, and included a local government debate on this issue for the first time in such Forum. This session was held in the framework of the “Cities for Adequate Housing” Declaration, and “The Shift”movement led by the UN Rapporteur on Adequate Housing. It was attended by local government representatives from Ulaanbaatar, Taipei and Vienna, a representative from the UN Special Rapporteur on the Right to Housing team as well as the Asian Coalition of Housing Rights, the International Alliance of Inhabitants, Asia Europe People’s Forum. It gathered fruitful inputs and key messages that will contribute to developing UCLG’s work on the issue of housing. The GPR2C also organized a session on the “Right to the City in Asia”.

Dr. Catalina Ortiz, who was invited to participate in the Special Session, facilitated the discussion and summarised the challenges and proposals. She identifying key priorities and messages on the right to housing in Asia and possible avenues to fostering dialogue and cooperation between local/regional initiatives on the right to housing and the “Cities for Housing” Declaration and “The Shift” movement. In addition, the DPU contributed to draft along with the organisers the part of the final declaration devoted to housing. The report product of this session will inspire the future of the “Cities for Adequate Housing” campaign as well as the UCLG-CSIPDHR contribution to the UCLG’s World Congress of Durban to tailor strategies to target the Asian region. 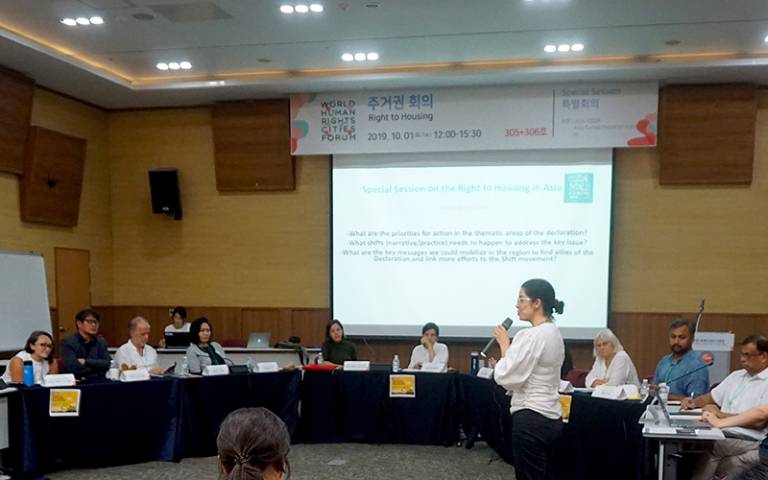 A series of conclusions were drawn from Speccial Session. The forum commended that for the first time the opportunity was created to address one of the most pressing urban challenges facing local governments, that of housing. It was agreed that it no longer makes sense to talk about human rights in cities if housing as a human rights imperative isn't addressed.

There was also a recognition that the continent of Asia has an unparalleled scale and pace of urbanisation, and that therefore is under significant pressure to deliver housing solutions for the 548 millions experiencing inadequate housing in South-Eastern Asia and Central and Southern Asia.

Finally, it was recognised that there is a crucial importance of local governments developing, in partnership with civil society and grassroots movements, human rights-based approaches to housing, including the delivery of public, social and affordable housing, the upgrading of informal settlements, and community led housing solutions.