Congratulations to DPU's Pascale Hofmann who has successfully defended her Eng.D thesis 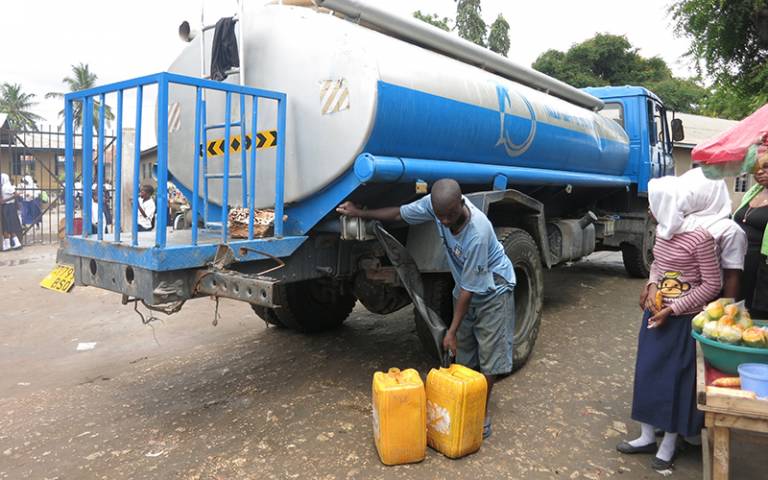 Pascale is a DPU lecturer and the Programme Leader of the MSc Environmnent & Sustainable Development programme. She has successfully defended her Eng.D thesis on 'The Dialectics of Urban Water Poverty Trajectories: Policy-driven and Everyday Practices in Dar es Salaam'

The Joint Monitoring Programme estimates that urban Sub-Saharan Africa experiences the highest levels of water poverty, i.e. much of the housing lacks access to basic drinking water and sanitation services (WSS). While the actual number of people that gained access in urban areas since 1990 may have increased, in Tanzania the percentage of people with improved access to water has declined. Dar es Salaam, a city facing growing challenges with the equitable provision of water services, is no exception. Failure of policy-driven practices (those by government, private sector providers, external support agencies and other key players in infrastructure development) to adequately address urban water poverty, has increased the reliance of poor women and men on a range of everyday practices to meet their WSS needs, including community-managed systems and informal private providers.

Her research adopts a normative perspective based on principles of socioenvironmental justice that include distribution, recognition and parity of participation, and applies a relational approach that draws on intersectionality scholarship and emphasises intersections of time, space and socioenvironmental relations. Within this framing, her findings confirm a dialectic relationship between policy-driven and everyday practices with multiple examples where conditions under which urban water poverty prevails are produced, reproduced and normalised.

However, her evidence also shows instances of more transformative practices that challenge unjust processes and outcomes with a potential for people to move out of it. Her findings highlight how spatial and temporal specificity alongside people’s intersectional identities and relations, shape individual trajectories and define who can and cannot escape water poverty traps and why.