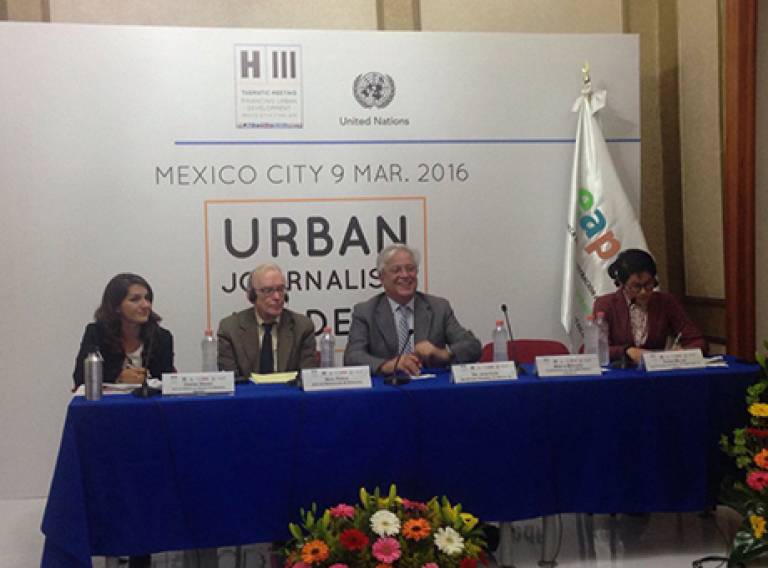 What role does media play in urban development? How are crucial urban issues being reported to citizens? Is the urban journalist another key stakeholder in urban development? Could community media influence the road towards a more sustainable urban development? These were some of the questions that guided the debate at the Urban Journalist Academy (UJA) that took place this week in México City to mark the beginning of the Thematic Meeting “Financing Urban Development” hosted by Habitat III secretariat and the Government of México City in advance to Habitat III taking place in Quito-Ecuador in October this year.

DPU alumna and former DPU Media Coordinator Gynna Millan chaired the session attended by journalists from different accredited media outlets in México and abroad that were covering the event. She delivered a talk focused on the processes of community or alternative media and the figure of the community journalist as a crucial piece in the pursuit of truly sustainable urban development. Her presentation reflected upon community media features and processes such as pedagogy, increased sense of belonging to territories and the expansion of political awareness in communities, to ask attending journalists how they were including and strengthening these, also rigorous and serious, processes of collective content creation and dissemination within their mainstream portrayals of cities. During the session Gynna also highlighted the fact that community journalists, who understand from the ground-up the everyday realities of urban communities, their struggles and challenges, are still absent from these discussions that purportedly aim at developing more inclusive strategies to improve urban living conditions in the time where cities will represent the majority of mankind.

Gynna is PhD canditate at Queen Mary University of London. Her research focuses on Smart Cities and Urban Development in the Global South.