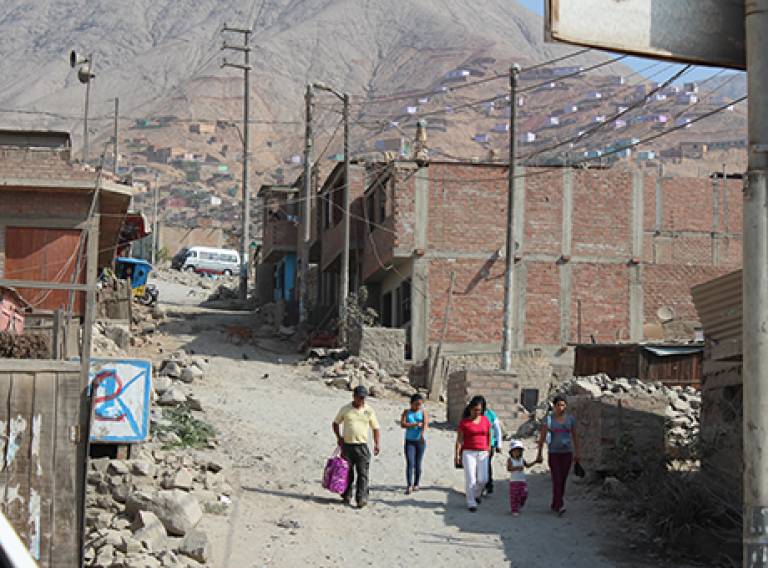 The DPU will be at COP20 in Lima between 1st and 12th December 2014, offering an open space for the voices of ordinary women and men in Lima living at risk to be heard. Our message is simple: across the urban global south, climate injustice is a form of spatial injustice, and this means that the uneven distribution of risk can only be challenged through a spatial re-learning of the city.

Building upon this message, we will share the outcomes produced through Learning Lima a learning-action platform initiated in 2012 by Adriana Allen and Rita Lambert in collaboration with Foro Ciudades para la Vida (FCLV), CIDAP, CENCA and UCL CASA. Learning Lima has been built upon the practical research undertaken since then by students from the MSc in Environment and Sustainable Development with various community groups across the city and, more recently, through the Mapping Beyond the Palimpsest (ReMapLima) project which explores the application of innovative mapping practices in ‘unmapped’ parts of the city, often deemed invisible or beyond the reach of local authorities.

Since the United Nations Framework Convention on Climate Change (UNFCCC) entered into force in 1994, the Conference of the Parties (COP) has met annually the supreme governing body of the Convention. However, over the years COP has become the site of multiple voices, not just those of the 195 countries that up to date have submitted their instruments of ratification but somehow failed to address the urban politics and local injustices of climate change.

If you're attending the conference join us in Voices for Climate, Stand 102, Jockey Club del Perú, for a lively programme of discussions and video screenings. For updates stay tuned via our Facebook page and our Twitter feed.