4 Days in Brescia – MSc BUDD experiences the 'City of Euphemia' During a long weekend in early February, participants of the MSc Building and Urban Design (BUDD) course, along with director Camillo Boano, tutor Caroline Newton and Graduate Assistant Emily Kelling, set out again on the streets of Brescia, Italy for the 2013 BUDDcamp. The task was to develop transformative design strategies rooted in a socio-spatial understanding of the different sites and the people inhabiting them.

The selected sites all had their own challenges and triggered the participants to question conventional planning and design thinking. In the refugee apartments in Cellatica the investigation focused on understanding how formal and informal contacts between the refugees, who are only temporarily staying in the flats, and the inhabitants of the housing block could be stimulated and how a redesign of the shared open spaces can support this. In the San Polino neighbourhood it became clear that social integration activities (something the ELEA Association has been striving for in the neighbourhood) between the residents, could be stimulated using their common environmental concern. The distress caused by the un-clarity about the future redevelopment of an unused open area could become the spatial catalyst for social engagement.

Through participatory tools and engaged walks with the youth of the San Giovanni centre for unaccompanied minors, it was discovered that the young refugees had a very good knowledge of the city and the different areas that they frequented. Although the Centre was located in the historical heart of Brescia the young refugees often frequented areas that were more peripheral. Unstructured interviews and spatial analyses inspired the development of hypotheses regarding how these young people appropriated their arrival city.

A visit to a Roma neighbourhood in Brescia’s periphery revealed how a very strong spatial isolation also hampers possible integration or appropriation of the city and provoked alternative ways of stimulating an integration discourse, using visual representations of children’s every day experiences in other parts of the city.

After four days of exploring the city and engaging with its citadins, the participants of the BUDDcamp understood how information, experience and (symbolic) attributes of space are of significance to provoke design actions or even an act of ‘refraining’ that can serve as a catalyst for transformation. 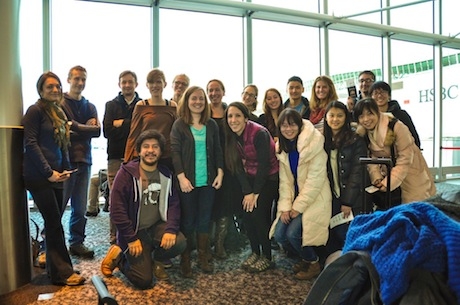