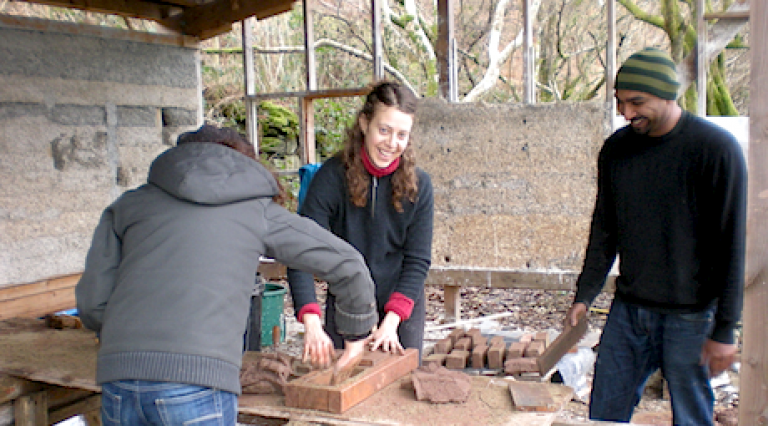 I grew up in Durban, South Africa. The year I graduated from high school, Nelson Mandela became the first democratically elected president of South Africa. Growing up in such a transformative and inspiring period, my peers and I were imbued with a great sense of optimism in the future but were also made more aware of the vast social and economic disparity that existed in our country and the need to alleviate this. It was this that eventually directed me to BUDD.

On entering the Architecture Faculty at the University of Natal, principals of social responsibility became reinforced in us due to the ethos of the faculty at the time. I remember a lecturer of mine who once said to us, ‘If you are studying architecture to build museums and skyscrapers, good luck - In all likelihood you are going to constantly be searching for work and in eternally close proximity to unemployment; but if you decide to go out and build for the poor you are likely to be busy for the rest of your life.’ Having been an architect on opposing sides of the money gap, I fully understand the wisdom of these words.

After completing my architecture studies I remained at university for a year as research assistant on a project called CRISP (Crime Reduction in Schools Project) after which I packed up and moved to London. I spent 6 years working at a couple of the largest firms in the capital. As a young architect there is a degree of fulfillment and prestige in working in these practices but I eventually realized that I sought a change in the type of work in which I was involved. I did not wish for a lifelong career designing what I considered to be ostentatious trophies for the wealthy.

I looked up organizations such as Architecture for Humanity, and as much as they offered some sabbatical opportunities for architects to work in areas in need, what I sought was a permanent shift in the trajectory of my career. After looking at several options I settled on enrolling for the MSc BUDD program at the DPU. I believe it to be the best choice I could have possibly made. The program surpassed all of my expectations. It changes the way you see the world around you as well as your role as a spatial practitioner within it.

I had chosen to complete the course over 2 years, going to class once a week while still working 4 days a week at the office. The staff at the DPU were extremely accommodating in helping me achieve this. The workload was intense at times, however it revolved around engaging and interesting critical debates. In that sense the content became easier to absorb. The DPU environment fosters cross-pollination of knowledge and ideas between students in all of its courses. It is an extremely global and cosmopolitan environment, and the outlook on spatial planning and development is holistic.

BUDD is probably the most design-orientated MSc course and is better suited to those from spatial backgrounds. An interesting aspect of the course is how it transforms your mindset of practicing as an architect. Architects, like Howard Roarke in The Fountainhead, are trained to be individually minded and focused on manifesting their visions into physical space. The BUDD course contests that ego and introduces you to the ethos of participatory design practice: something I was never comfortable with initially, but having now worked in developing contexts I can’t advocate for this enough.

In modules such as the BUDD Studio you learn within engaging scenarios where the practical lessons of the course become balanced with the theoretical. The role of praxis is felt during the memorable field trips that allow you diverse learning. From the development planning workshop in Royal Windsor to making mud bricks in the Welsh mountains and working with slum communities on the sweltering streets of Mumbai - You leave BUDD having learnt by doing, not just reading.

Since graduating I have resigned myself from the London architecture scene and moved back to South Africa. I have taken up a position as Chief Planner and Urban Designer at the Department of Rural Development and Land Reform. I have come to learn that with all the hype of globalization and urbanization that is being bandied about in development circles, not enough is being done about the state of development in rural areas.

There are underlying capitalist reasons for this but overall such an approach is unjust. Urban and Rural are dichotomous and development should be conducted much more equitably. Using the knowledge of development I acquired at the DPU, I aim to challenge concepts and help shape some of the policy that we advocate in the department.

My work with the department also revolves around spatial planning initiatives in rural areas around the country. In most cases these rural communities are the poorest of the poor - the most vulnerable and sensitive to climate change. Working with these communities to uplift their spatial environment presents complex challenges.

As an urbanite and architect I may in the past have responded to these challenges inappropriately had I not been honed for praxis through the BUDD program. I constantly find myself referring to the many techniques I learned in the BUDD course to engage with communities and ensure contextually correct spatial interventions.

Completing the MSc BUDD at the DPU has granted me much greater fulfillment from my career by allowing me to work with communities I believe are more in need of my skills. It has also opened up my mind to the development world as a whole and allowed me to interact with and befriend some of the most intelligent and kind people I have ever met. I recommend the BUDD experience highly to anyone who wishes to make a change in the trajectory of their spatial planning career towards helping those in need.